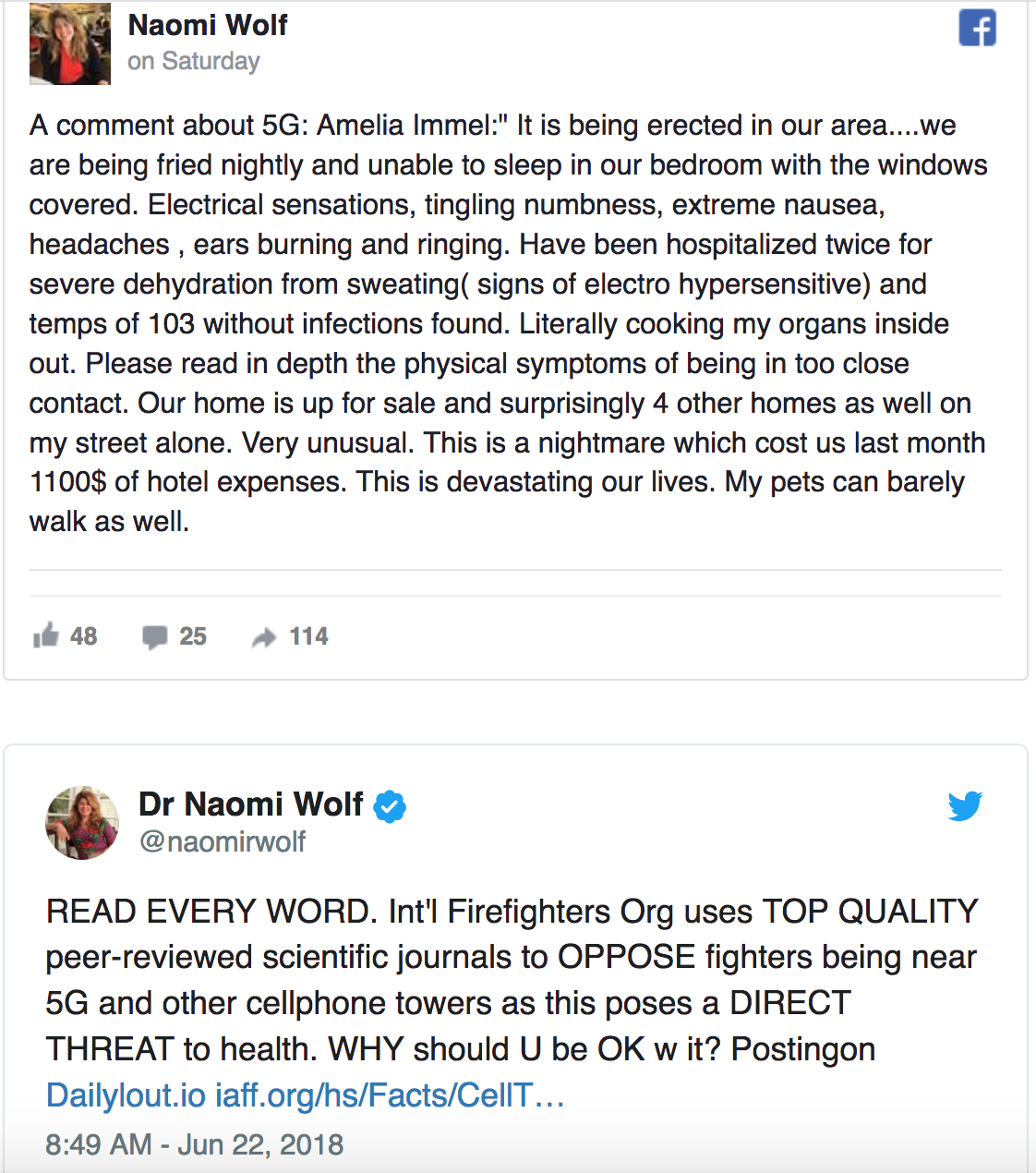 Over the last few months, there has been A LOT more media coverage about harm caused from exposure to digital and wireless technology – especially in regard to 4G and 5G small cell towers which are popping up everywhere.  Even Dr. Oz featured a segment about 5G on his show in February.

Reporters are sometimes referring to The Telecom Industry as “Big Wireless” and comparing it to “Big Tobacco.”

In September 2017, 180 scientists and doctors demanded a moratorium on the installation of 5G small cell tower infrastructure due to biological and environmental risks.

Regardless, “The Precautionary Principle” regarding exposure to all cell phone and wireless WiFi technology has been completely ignored for 20+ years.  Outdated legislation has made this possible.

The reality is that there have never been “safety” standards for digital and wireless products – only guidelines.   In fact, no “safe” level of exposure has yet been scientifically determined for children or pregnant women.

Dr. Naomi Wolf and other New Yorkers (as well as their pets) are now experiencing the horrors of new 5G wireless exposure first hand. 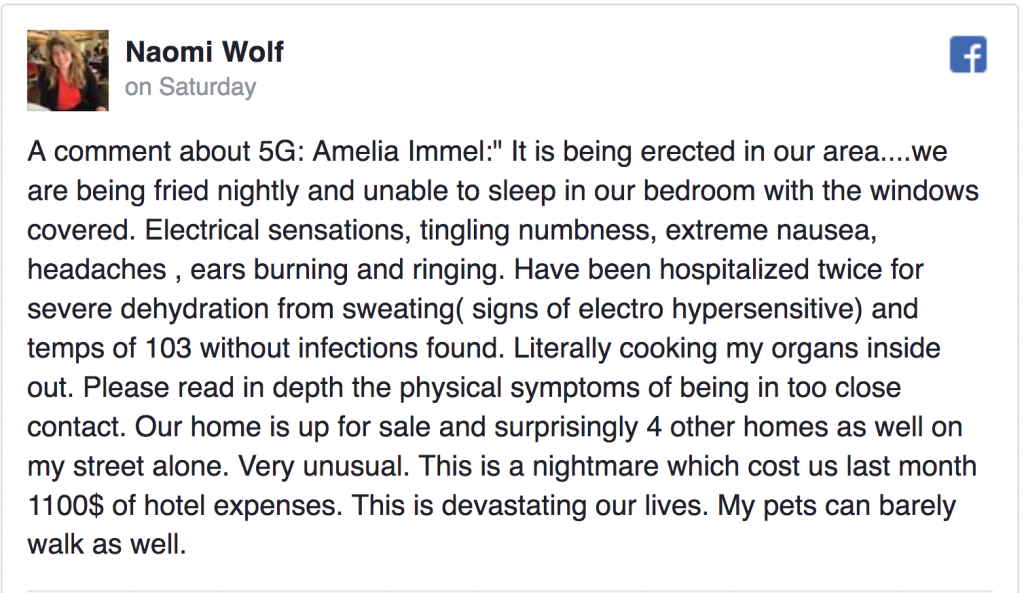 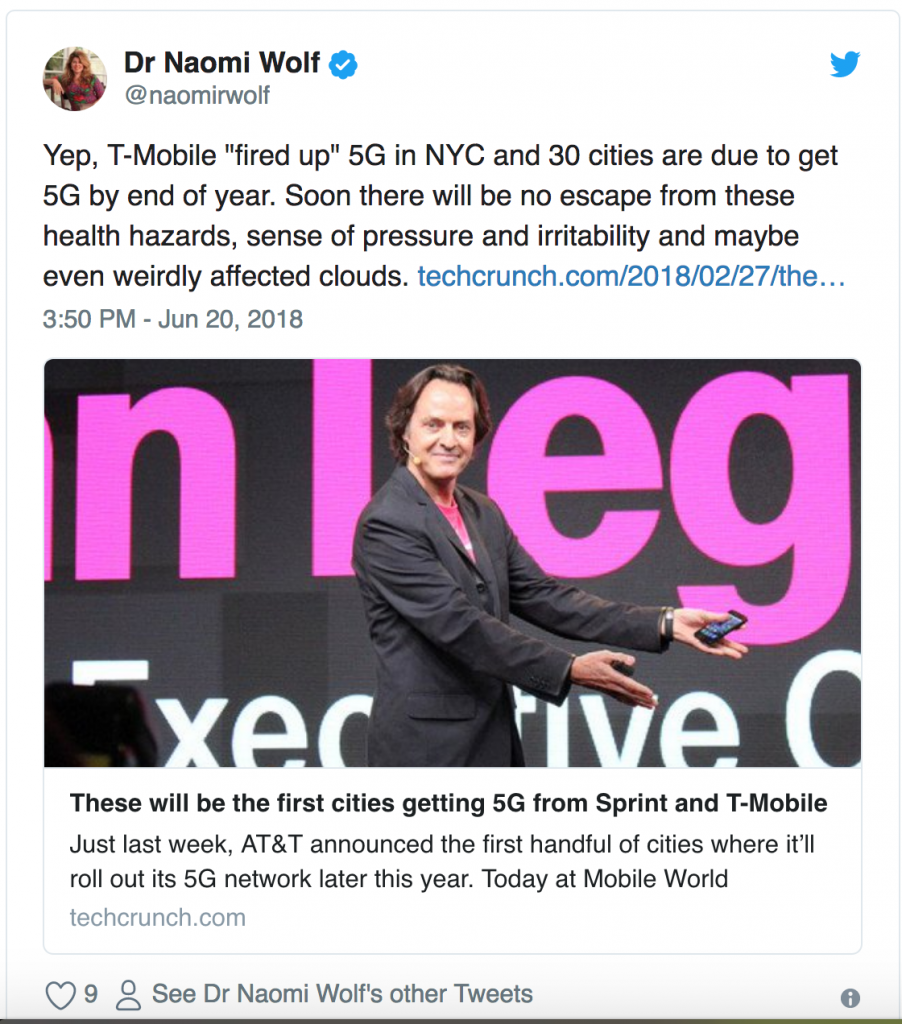 Wireless WiFi radiation has never been magic even though marketing has always made it seem that way.

Research has already confirmed that exposure can:

Last week The Natural Resources Defense Council and Center of Biological Diversity asked public and organizational comments be submitted to them in order to fight widespread 5G installation as well.

People everywhere are fighting the installation of 4G and 5G towers in their communities.

U.S. broadcast stations have also been reporting about harm caused by exposure to WiFi and other sources of electrical pollution (Electrosmog) as well.

Many U.S. state and federal elected officials are also forcing this risky technology on Americans.

Samsung has already designed a 5G router that can be installed inside businesses and homes for those who want to use it – despite the health risks.  This should be enough to stop “the powers that be” from forcing this harmful technology on Americans and everyone else.

How much longer before President Trump finally addresses this?