The information below is brought to you by Claire Edwards – https://forlifeonearth.weebly.com

YOU NEED TO UNDERSTAND THIS IF YOU DON’T AREADY.  This is how your world has been hijacked and you have been made into a slave.

Amazing Polly shows how the satanists infiltrate absolutely everything – exposes how it’s done.  This is part of the picture that shows how society is taken over and subverted.  Another one who is very good on this is Mark Windows (Mark Windows – The Global Agenda Behind the Stop5G Hijack: https://www.youtube.com/watch?v=djpY63Jc9b8 and Mark Windows – 5G Debate Hijacked by Globalists: https://www.thetruthseeker.co.uk/?p=196172).

I have my own direct experience of all this.  When the International Appeal to Stop 5G on Earth and in Space was hijacked, the people who did it were from Worldshift.  When I dug into this, I found that it is an organization created by the Club of Rome, via the Club of Budapest and Ervin Laszlo.  I found the Worldshift Declaration of 2011, and this shows you exactly their aims: to destroy society, humanity, the family, nation states, religion …  They actually tell you what they aim to do.  And these people create further organizations.  Laszlo also got Deepak Chopra, a member of Club of Budapest, to create the Evolutionary Leaders group, which includes Bruce Lipton, Gregg Braden, Lynne McTaggart, Marianne Williamson and a whole host of supposedly “spiritual” people whose names will be familiar to you and who are also pushing this sick agenda.  Bruce Lipton in particular has been a massive pusher of Worldshift.  The idiots think it is all about destroying our societies in order to “Build Back Better”.  To give them some credit, they are so stupid that they don’t realise they are working for satanists, although they were all big pals with Barbara Marx Hubbbard, who wrote a book that included demonic voices telling her how they would kill half of humanity but make sure that her “nice” group would not have to suffer too much while this went on.  I’ve explained some of all this here: https://forlifeonearth.weebly.com/hijack-of-the-5g-space-appeal.html.

Note that the people who hijacked the 5G Space Appeal were called stop5ginternational and they were the direct creation of Worldshift – in other words, they were also a creation of the Club of Rome through its network.  They are now trying to hide again by changing their name to Safetech International, and you will see that they are still using the same logo as stop5ginternational, with different wording.  Their logo shows the earth controlled by hands above and below – that clearly shows their aims.

Also be aware that the Citizen’s Initiative – “Stop 5G – Stay Connected but Protected” also comes from the very same stable, with its pusher, Pernille Schriver, also being a stop5ginternational member.  This initiative is yet another dead end that they want to push 5G protesters into.  Don’t fall for it. 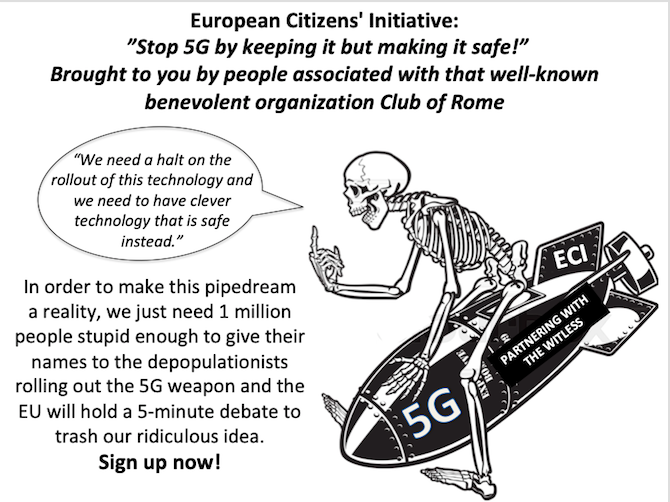 Be warned!  We need to take back our world from the satanists.  In order to do that, we need to understand how they have gone about their work and we need to identify the traitors to humanity who have participated so that we can make sure that they take no further part in any policy-making and are drummed out of our circles.

Anyone who protests their innocence must be named, exposed and discredited.  Many of them are just stupid and that is exactly why they are selected and promoted by the globalists, but that is precisely what makes them so dangerous.  Don’t trust them – do your own research and trust yourself.

New items added every day at For Life on Earth:  https://forlifeonearth.life/