Excerpted from my forthcoming book The Dark Side of Prenatal Ultrasound. 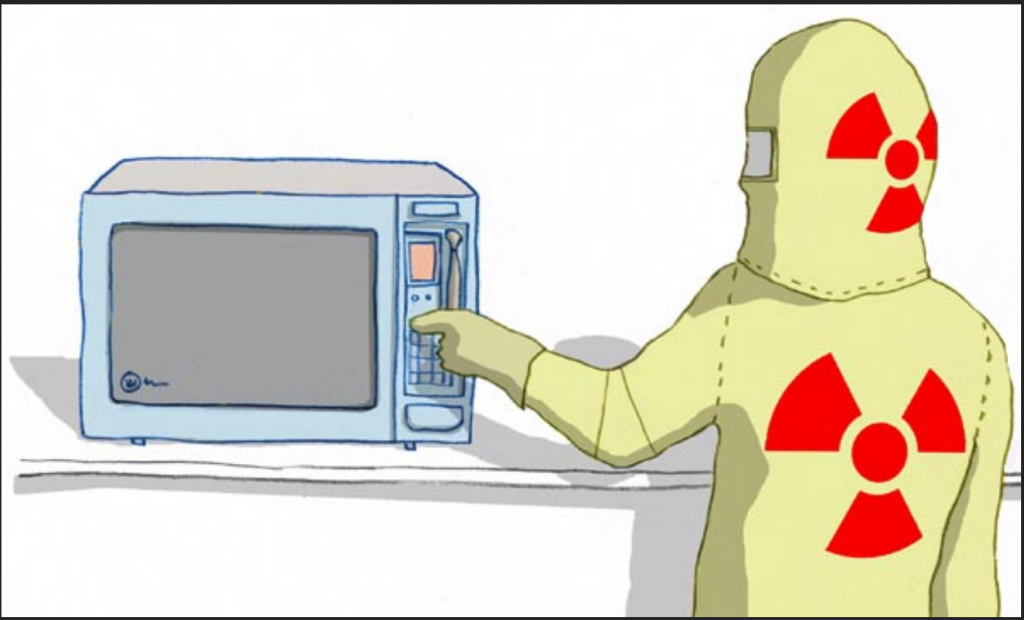 We and our children are in great danger at this time. Our homes, schools, workplaces, automobiles, and more are now swimming in a field of noxious radiation-emitting devices. These devices include cell phones, smart meters, laptops, wifi routers, televisions, cordless phones, baby monitors, microwave ovens, GPS devices, and much more. Ultrasound and all other radiation‑emitting medical devices are part of this toxic grid. All of these technologies have the potential to alter our neurology, change our thoughts and behavior, and ultimately lead us to our demise.

It is beyond the scope of this book to go into detail about the weaponized nature of this radiation-emitting grid. However, a short quote from Nikola Tesla provides insight into its true purpose.

“Alpha waves in the human brain are between 6 and 8 hertz… All biological systems operate in the same frequency range. The human brain’s alpha waves function in this range and the electrical resonance of the earth is between 6 and 8 hertz. Thus, our entire biological system – the brain and the earth itself – work on the same frequencies. If we can control that resonate system electronically, we can directly control the entire mental system of humankind.”

What is imperative for us to understand now is that, despite the lies we have been fed by the medical-military-radiation complex, at every level and at all times, exposure to manmade radiation is harming us. Manmade radiation has very serious deleterious effects on all life forms and if we allow the current situation to continue, it has the potential to destroy entire genetic bloodlines and the ability of Earth’s children to procreate and/or produce healthy children of their own.

Although every one of these devices has been presented to the public as if it were somehow beneficial, many researchers have suggested that this networked arsenal of radiation-emitting technology is nothing short of a maniacal, genocidal, control system with the capability of inflicting serious harm. Now, with the advent of 5G and frequencies as high as 90 billion hertz, the level of assault is being ramped up to an extreme degree…

Microwave ovens, for example, utilize non-ionizing radiation for the heating of food. Similar to the way piezoelectric crystals violently shake and vibrate when electricity is applied to them, microwave ovens violently shake and vibrate the water molecules in our food, causing the emission of radiation. The violence that is inflicted on the water molecules in the food changes the molecular structure of the food as well as the blood chemistry and bodily functions of humans that eat microwaved food.

According to Dr. Hans Hertel,

“’Technically produced microwaves are based on the principle of alternating current. Atoms, molecules and cells hit by this hard electromagnetic radiation are forced to reverse polarity 1 to 100 billion times a second.’”

There are no atoms, molecules or cells of any organic system able to withstand such a violent, destructive power for any extended period of time, not even in the low energy range of milliwatts… This is how microwave cooking heat is generated – friction from this violence in water molecules. Structures of molecules are torn apart, molecules are forcefully deformed (called structural isomerism) and thus become impaired in quality…

[T]here is direct damage to cell walls and genes from microwaves. Gene altering technology, which includes the biotech food industry, alters genes by weakening them with microwaves. ‘…the cells are actually broken, thereby neutralizing the electrical potentials – the very life of the cells…’”

The above description sounds almost identical to what is happening to crystals when they are forced to endure being shocked with opposing electrical forces for the creation of ultrasound. Friction from violence, molecules being torn apart and forcefully deformed, reversal of electrical potentials, etc. – all of this is life‑destroying science with potentially lethal effects for Mankind and other life forms.

“‘Nukers’ emit at 2,450 megaHertz (MHz), equivalent to 2.4 gigaHertz (GHz), causing dielectric heating, meaning the water molecules in the food vibrate violently at extremely high frequencies (millions of times per second), creating molecular friction, destroying nutrients and affecting the heart rate and variability of any person that stands near the oven. This is why it’s extremely dangerous to cook meat, because the blood is affected also, like the molecules in the water in food. Structures of those molecules are ripped apart and forcefully deformed. Some people call it “electric whiplash.”

Interestingly, ultrasound is being used for the very same thing! It is being used to deliberately weaken cell membranes (for example, weakening the blood brain barrier for purposes of toxic pharmaceutical delivery) and in the field of gene alteration such as for the process of “gene transfection” which involves the genetic modification of mammalian (including human) cells through the insertion of alien DNA and RNA. Ultrasound “enhances” this satanic process by making cells more permeable to foreign genetic material.

“Not only is ultrasound (US) widely used for imaging; its interaction with biological tissues is known to induce a wide variety of non-thermal effects ranging from hemorrhage and necrosis to more delicate manipulations of cells and their membranes such as permeability enhancement, induction, and increased gene transfection…”

Violent cavitation events can occur in liquids that are exposed to RF/EMF/microwave or ultrasonic frequencies. These cavitation events are occurring in microwaved foods as well, which is part of what makes these foods highly toxic.

“Did you know that heating water in the microwave can actually be dangerous? This is not an experiment, but rather a warning to help you avoid a potential disaster. The American Burn Association (ABA) has identified scald burns from superheated liquids in microwaves as a target for a new public awareness campaign… “Water alone should never be heated in a microwave.” Here’s why… This is an all too common example of what can happen. A man decided to have a cup of instant coffee, so he heated a cup of water in the microwave. When the timer went off, he removed the cup from the microwave and noticed that the water had not boiled.

Just then, the water literally “blew up” in his face. His whole face was blistered with first and second degree burns, which left some permanent scarring and damage to his left eye. While at the hospital, the doctor attending him stated that his is a fairly common occurrence. Water (alone) should never be heated in a microwave oven. This phenomenon is known as superheating.”

Microwave “superheating” sounds very similar to the 8500°F cavitational implosions that are sometimes generated by ultrasonic irradiation. These extremely volatile, unnatural forces contribute to the damaging effects that microwave cooking has on human health.

▪ “Eating food processed from a microwave oven causes permanent brain damage by ‘shorting out’ electrical impulses in the brain.

▪ The prolonged consumption of microwaved foods causes cancerous cells to increase in human blood. Moreover, these foods cause stomach and intestinal cancerous growths (tumors). This may explain the rapidly increased rate of colon cancer in America.

▪ Minerals, vitamins, and nutrients of all microwaved food is reduced or altered so that the human body gets little or no benefit.

“…2.4 GHz, [which is] the average frequency produced by microwave ovens (and WiFi routers, by the way) can cause immediate and drastic changes to the human heart…

[P]eople exposed to radiation for just three minutes at 2.4-GHz can experience severe reactions in heart rate changes and altered heart rate variations, indicating an alarm response to stress, also called electrohypersensitivity (EHS) or rapid aging syndrome. This has been studied for decades. The response includes heart palpitations, clumping of red blood cells and fluctuations of the parasympathetic nervous system typical of a “fight-or-flight” response.”

The phenomenon of radiation-induced rapid aging was noted more than a half a century ago by mathematician and medical researcher, Rosalie Bertell. In the early 1960s, she stated:

An X-ray in the abdominal area, where it really hits the major blood-forming organs of the pelvic arch, ages us at the rate of about one rad, one year. One spinal X-ray is about one rad, and that’s equivalent to one-year natural aging for increasing your leukemia rate. If the radiation is chest area or even upper thigh, one rad is about six-tenths of a year. You’re not hitting as much of the bone marrow, apparently.

Then I learned that if you had dental X-rays, and X-rays of arms and legs, which are again less bone marrow exposure, one rad was equivalent to about a quarter of a year.

This was a measurable health effect…

There’s been a campaign since 1951 to convince the public that low-level radiation is harmless… People have a right to know what’s happening to human health.”

Indeed, people have a right to know. But we have been consistently lied to by the medical-military-nuclear complex that is wholly responsible for exposing billions of living organisms, including humans, to extremely harmful, manmade radiation. Even though Rosalie Bertell was speaking about “ionizing” radiation, in fact, technologies that utilize “non-ionizing” radiation are producing the exact same effects. All of these radiation-emitting technologies are interfering with the electromagnetic signaling that animates life and this, in turn, is having a deleterious effect on the human heart and much much more. Smart meters, which utilize continuous pulsed electromagnetic radiation, cause the same problem.

“Footage has been published of smart meter transmissions disrupting the human heartbeat… Repeated disruption was found at 1m from a smart meter… Dr. Leon warned this effect ‘silently makes our hearts work too hard’, a chronic stress.”

“Studies have found that exposure to high intensity ultrasound at frequencies from 700 kHz to 3.6 MHz can cause lung and intestinal damage in mice. Heart rate patterns following vibroacoustic stimulation has resulted in serious negative consequences such as atrial flutter and bradycardia…”

Obviously, these technologies are a threat to life and things are about to get even more serious. The powers-that-shouldn’t-be are now discussing increasing the frequencies used in microwave ovens from 2.4 GHz to 30 GHz (30 billion hertz). Having just learned that frequencies of 2.4 GHz can cause heart problems and rapid aging syndrome, it is not hard to imagine that 30 GHz of microwave frequency is going to cause serious harm.

Keep in mind that microwave ovens, along with ultrasound and the first atomic bomb, were initially created around the time of World War 2 as part of an arsenal of war technologies. These dangerous (and sometimes lethal) technologies are deeply interconnected and we will discuss this in some detail in Volume II of this series when we cover ultrasonic weapons and the history of ultrasound.

Since WW2 and the “birth” of these radiation-emitting technologies, there has been an ever-increasing amount of manmade radiation being deployed against Mankind and other life forms. In fact, we are now surrounded by an entire grid of radiation-emitting technologies such as cell towers, wifi routers, cell phones, wifi TV, microwave ovens, GPS devices, RFID chips, broadcast antennas, satellites, smart meters, HAARP, medical radiation including ultrasound, and much much more. Even baby monitors are part of this weaponized grid and we had better get hip to this very quick or all life on this planet will be in serious jeopardy.