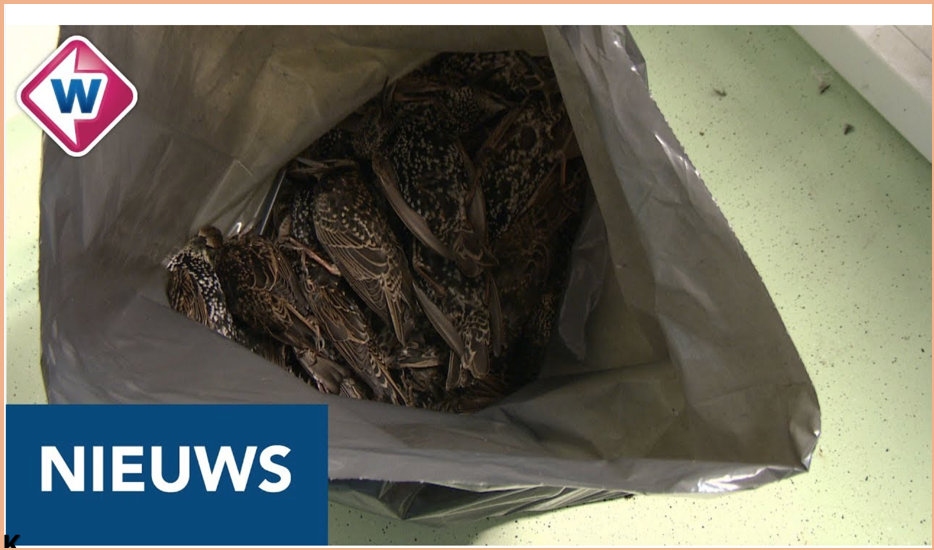 About a week ago at The Hague, many birds died spontaneously, falling dead in a park. You likely haven’t heard a lot about this because it seems keeping it quiet was the plan all along. However, when about 150 more suddenly died- bringing the death toll to 297- some started to take notice.

And if you are looking around that park you might have seen what is on the corner of the roof across the street from where they died: a new 5G mast, where they had done a test, in connection with the Dutch railway station, to see how large the range was and whether no harmful equipment would occur on and around the station.

And harm happened, indeed. Immediately afterward, birds fell dead from the trees. And the nearby ducks that were swimming seemed to react very oddly as well; they were simultaneously putting their heads underwater to escape the radiation while others flew away, landing on the street or in the canal.

Again, almost at the exact same time that those animals died, near the station, Holland Spoor was tested with a 5G transmitter mast.

“If they all got heart-failure with an healthy body, no signs of any virus, no bacterial infection, healthy blood, no poisons found etc. etc. The only reasonable explanation is, that it is from the new 5G Microwaves having an huge effect of all birds hearts! … It heavily resonates with certain ERRATIC PULSED Microwaves (millions per second!) which can be proven to have biological effects on organs! … Am not kidding here! … Some people assume Microwaves at lower wattage “can not harm” because “it does not cook you” … that very flawed “logic” is what they want you to repeat over and over! … Search in “Google Scholar Search Site”: Biological Effects of Non-ionizing Microwaves and be ready to be shocked how stupid most sheeple really are in believing blindly the so called “experts” & ” authorities” of FCC, Telecom & Wireless Industry propaganda!” -John Kuhles, founder of Fb.com/groups/Stop5G & Fb.me/Stop5G owner of Stop5G.net

This wasn’t proof though. It was initially just conjecture.

All the information that follows comes from John Kuhles’ public Facebook page (not being a native English speaker, I have cleaned a little of it up but mostly left it intact for you):

In the meantime (30-10-2018) received some more information. The birds that fell massively dead would be the victims of an experiment, performed on those days in The Hague, where RF radiation was tested with a peak frequency of 7.40 GHz. This information comes from one source and should still be confirmed, if possible.

It is not clear at this moment whether tests with 5G transmission masts have been carried out again, but so far everything points in the direction of 5G as the most probable cause. Earlier, crazy things happened, such as with cows in Groningen’s Loppersum last year, where it was also tested with 5G. But also how in Switzerland a complete herd of cows collapsed in a ravine when there was tested with 5G. Source 1: www.msn.com/nl-nl/nieuws/opmerkelijk/meer-dan-honderd-vogels-vallen-dood-uit-bomen-in-den-haag/ar-BBOV8d7

In the Huijgenspark in The Hague, more than a hundred starlings have fallen dead from the trees in recent days. It is a mystery what happened to the animals. 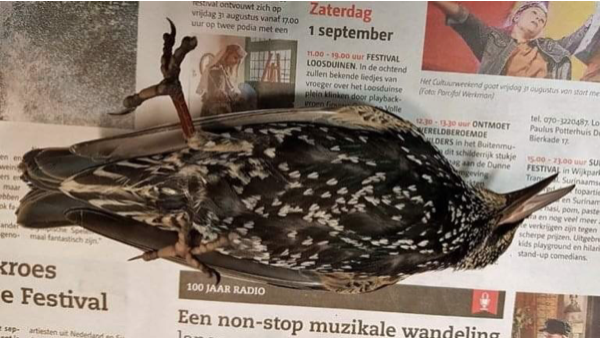 The Dutch Food and Consumer Product Safety Authority (NVWA) is having a number of birds examined in the laboratory of Wageningen Bioveterinary Research. Parts of the park are blocked and dogs are no longer allowed to be let out. The dead birds are always cleaned up as quickly as possible. Yet it is a lugubrious scene. Council member Robert Barker of the Party for the Animals had the feeling of being on a ‘crime scene’. “The fact that so many birds fall from the sky at this location must have a cause and must be investigated. If there is talk of poisoning, then we have to take a hard time. ”

It is also possible that the birds have a disease. “In any case, it’s going fast. The animals are not emaciated, do not seem ill. They just fall dead from the tree, “says employee Sharon Lexmond of bird shelter De Wulp.

A possible link was established between 5G trials in Groningen and the ‘crazy cows there, as they were called, see: www.stopumts.nl/doc.php/Berichten%20Nederland/10423/groningen_wat_mankeert_de_koeien_van_stitswerd

Trondheim (3rd city of Norway) also attacked the birds. After 6 months there was no toxicological report yet. It has also happened in Sweden, Australia, United States.

In the meantime (30-10-2018) received some more information. The birds that fell massively dead would be the victims of an experiment, performed on those days in The Hague, where RF radiation was tested with a peak frequency of 7.40 GHz, which corresponds to a wavelength of 4.05 cm. This wavelength is of the same order of magnitude as the size of the starlings. This may be important because of possible resonance effects. The mast in question is about 400 meters from where the starlings have fallen dead. This information comes from one source and should still be confirmed, if possible. 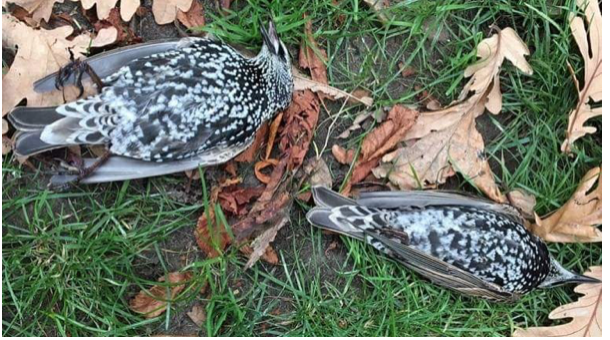 Mysterious bird deaths in The Hague: dead starlings fall massively from the sky

For several days in a row, dead starlings fall from the sky in the Huijgenspark in The Hague. It is estimated that around 150 birds have already lost their lives. What is the cause of this is being investigated?

The Dutch Food and Consumer Product Safety Authority, the Dutch Wildlife Health Center and a Wageningen University laboratory are investigating the cause of death of the starlings. A veterinarian of bird care De Wulp performed a number of birds last week. She only found internal bleeding and no trace of poison.

”Last year we had the same situation at the Haagse Hogeschool, where it was renovated at the time ”, says an employee of the Animal Ambulance.” Then dozens of dead jackdaws were found, which were probably poisoned because they had been drinking polluted water. What is going on right now is really speculating. Hopefully, we know more next week, because this is not normal. ”

No trace of poison.

Again, dead starlings have been found in the Huijgenspark in The Hague. More than ninety dead birds were spread across the park in the Stationsbuurt.

We took the birds. Last time, five of the deceased starlings were examined by a local specialist. It did not show signs of poison, but only internal bleeding in two copies. The newly found starlings are examined by the specialized Wageningen Bioveterinary Research laboratory in Lelystad and the Dutch Wildlife Health Center in Utrecht.

The municipality has promulgated a ban on dogs in the area because the cause of the mortality is unclear. Poisoning is taken into account. The area has been blocked by the police.

How is the current state of affairs with regard to the dead starlings? 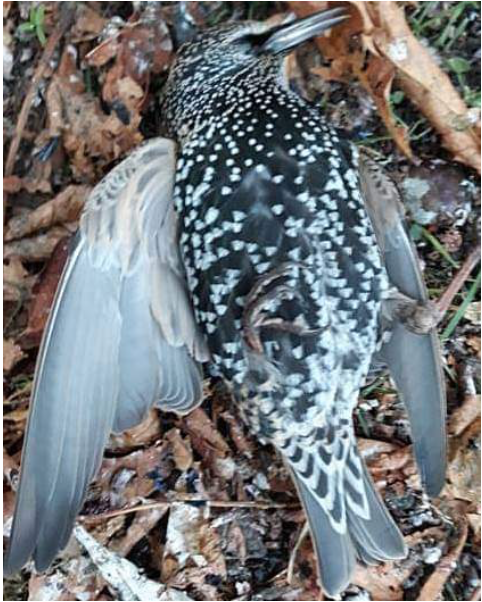 Last Friday, Wednesday and Thursday, a total of +/- 150 deceased starlings were found in the Huijgenspark in The Hague. OnSundayy, Thursday and Friday our veterinarian visited and carried out a total of 15 animals and collected material for further research. On Wednesday, the NVWA collected a cargo of birds that were examined in Lelystad on West Nile Virus. The negative result has now arrived.

On Thursday, the Dutch Wildlife Health Center also picked up a load of birds and we got a result today. Both veterinarians (ours and those from the DWHC) discussed their findings with each other. (Birds in good condition, some small bleeding in some animals, good for the upcoming winter, empty stomachs.) It is a very strange story!

Components of the deceased birds now go to various institutes for further research into rat poison and various viruses. On Monday the preparations are ready and the microscopic examination is started.
In the meantime, the municipality has instituted an outlet ban in the park until further notice.

We will keep you informed and hope that we will get a quick answer regarding the bizarre deaths.

There is, of course, no certainty about the cause. There are stronger 4G and IoT channels in the vicinity near the park. In July there was also 5G tested, but then the birds did not swarm and they did not arrive in the park. IoT has also been active since 30 October 2017, so it is only briefly active with a safe distance (for humans) of 7.4 meters and with a 2000 Watt transmitter at less than 200 meters from the park main beam direction exactly across the park. Also at the same distance LTE channels and at another location also LTE stations etc. Here again exactly about the park.

The truth about the safety of 5G is that it’s not safe. And while letters have been sent and people have raised the alarm, the “powers that be” don’t seem to care. All in the name of money and industry.

Make sure to click on the links below for even more information on 5G technology: