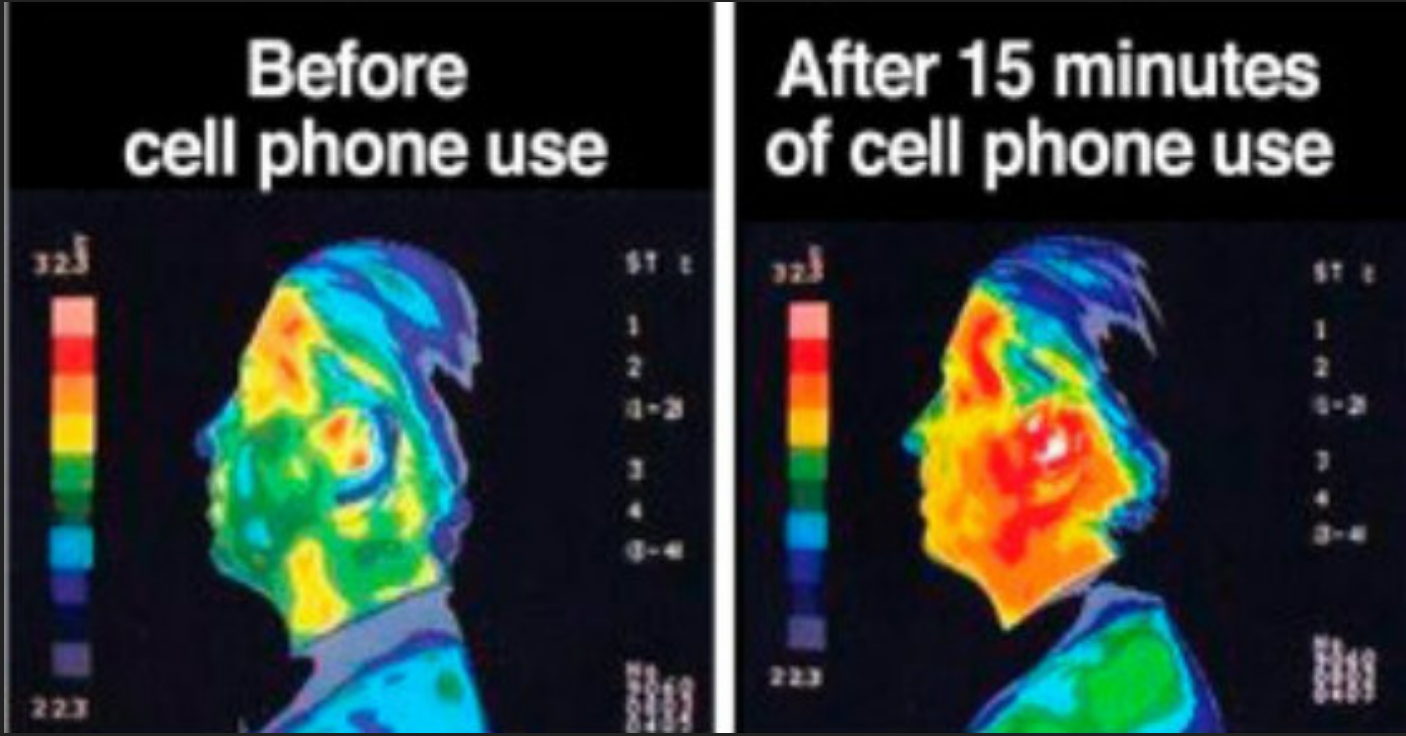 When they tell you there is no research to indicate that these technologies cause harm, they are lying. This article is from 2011 and NOTHING has changed except their insane push for higher and higher levels of radiation with 5G.

A well-regarded and influential team of researchers from the National Institutes of Health (NIH) and the Brookhaven National Lab (BNL) is on the brink of resolving a long-standing dispute with enormous implications for public health. In a paper due out tomorrow, Nora Volkow and coworkers are reporting that cell phone radiation can affect the normal functioning of the human brain.

Whether these short-term changes will lead to health consequences (and what they might be) is far from clear — though Volkow already has preliminary indications of a long-term effect. Nor is the mechanism of interaction yet known. But the new finding, if confirmed, would at the very least force a rethink of the prevailing orthodoxy, which maintains that low levels of RF and microwave radiation are too weak to have any effect and can be disregarded.

“The study is important because it documents that the human brain is sensitive to the electromagnetic radiation that is emitted by cellphones,” Volkow told the New York Times.

Using positron emission tomography (PET), the NIH-BNL researchers have shown that radiation from a 50-minute cell phone exposure can speed up glucose metabolism, an established measure of brain activity. The finding is highly statistically significant. What is particularly remarkable about the new work is that those regions of the brain that were most highly exposed to phone radiation had the largest increases in metabolic activity. The NIH-BNL paper is published in the February 23rd issue of the Journal of the American Medical Association (JAMA).

“This paper is just dynamite,” said David Carpenter, the director of the Institute for Health and the Environment in Albany, NY. “It’s going to be very difficult to deny that RF radiation from a cell phone does not alter nervous system activity.” Carpenter, a neurophysiologist, has been active in the electromagnetic research community for over 30 years. “This work will turn the whole issue around,” he told Microwave News.

The still dominant view among health and safety committees is that if RF and microwave radiation does not cause bulk heating, there will be no biological effects. Yet, the changes in brain metabolism observed by the Volkow group do not appear to have been caused by a temperature rise.

It is unlikely that the changes seen in the brain could result from a thermal effect, Volkow told Microwave News. Volkow is the director of the National Institute on Drug Abuse (NIDA), one of the 21 institutes that make up the NIH.

An editorial that accompanies Volkow’s paper echoes this conclusion. “[B]rain areas that showed an increase in glucose metabolism were quite distant from the [phone]. Thus, it is not likely that the effects were caused by heating,” wrote Henry Lai of the University of Washington, Seattle, and Lennart Hardell of Sweden’s Öreboro University Hospital.

“It’s time to stop denying the existence of non-thermal effects,” Hardell said in an interview.

Lai and Hardell pose what they call “an important question”: whether glucose metabolism in the brain might be “chronically increased from the regular use of a wireless phone.” Such potential health effects need to be clarified, they stated.

In fact, Volkow has some data suggesting that such chronic effects do occur: The most active users of cell phones were found to have the largest changes in glucose metabolism in those areas of the brain exposed to the phone radiation. “We want to replicate these findings before submitting them for publication,” Volkow said. She added that that she would continue to investigate whether the use of cell phones has long-term consequences.

The new paper does not address whether the use of a mobile phone may entail a brain tumor risk. “[T]hese results provide no information as to their relevance regarding potential carcinogenic effects (or lack thereof) from chronic cell phone use,” according to Volkow and her colleagues.

An acute, short-term effect alone would forever change the research landscape for electromagnetic field effects. For decades, the microwave community has been awash with reports that low-level radiation can lead to numerous neurological effects, such as leakage through the blood-brain barrier, changes in calcium in and around brain cells and DNA breaks in the brains of exposed animals. But in each case skeptics have countered that they could not repeat the experiments and therefore the original work must have been flawed and should be repudiated. Volkow’s new study will no doubt face a similar barrage of criticism.

In the study, 47 healthy subjects, nearly evenly split between men and women, were outfitted with a cell phone on each ear. Glucose metabolism was measured using PET scans, a technique first developed at BNL in the 1970s. Each participant was scanned twice, once when the right-hand phone was turned on and once when both phones were off (the phones were kept muted and the subjects were unaware when one of the phones was active). The phone exposures lasted 50 minutes and the PET scans were started five minutes after the phone was turned off. They reflect the average brain activity over a 30-minute period.

Although glucose metabolism was not altered for the brain as a whole, there were significant effects in those locations closest to the phone, the right orbitofrontal cortex (see the arrowhead in the figure on the left below) and parts of the temporal lobe. These areas of the brain have been shown to have the highest RF radiation exposures when using a mobile phone. As Volkow explains in the paper: The “regions expected to have the greatest absorption of RF-EMFs from the cell phone exposure were the ones that showed the larger increases in glucose metabolism.” 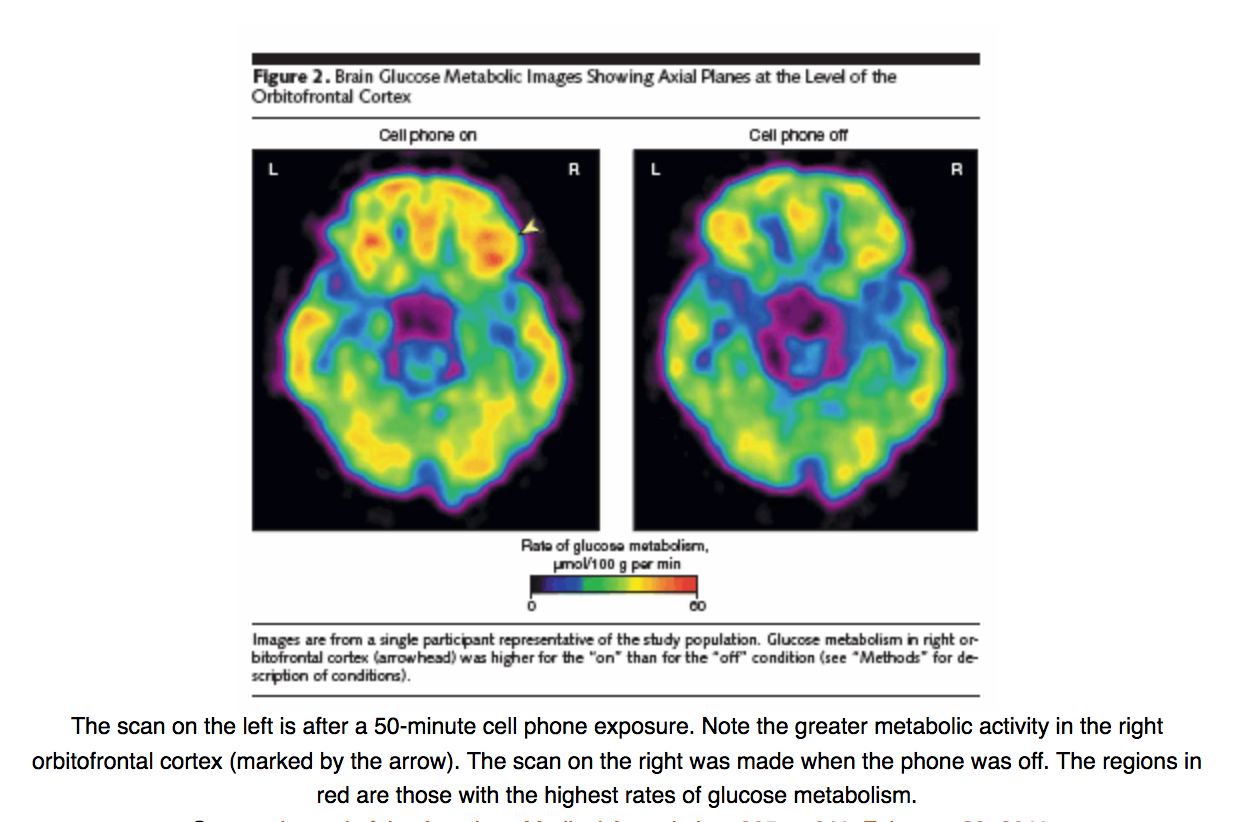 The observed increases were “similar in magnitude” to those reported after transcranial magnetic stimulation, a treatment for depression, according to the NIH-BNL researchers. Their new study is one of many they have carried out over the last decade. Last year, they published a paper in NeuroImage showing reduced metabolic activity in some regions of the brain during an MRI scan. Their emphasis has most often been on the effects of drugs on the brain.

The NIH-BNL team used two Samsung cell phones (model SCH-U310), transmitting and receiving CDMA signals, with a maximum specific absorption rate (SAR) of 0.901 W/Kg in the head. That is substantially lower than the U.S. FCC’s limit of 1.6 W/Kg for hand-held cell phones.

The paper does not estimate the SARs expected in the regions showing the largest changes in glucose metabolism. While it leaves the impression that the phones were operating in receive-only mode —and therefore inducing lower SARs than when transmitting— Dardo Tomasi, a member of Volkow’s team who has appointments at both NIH and BNL, told Microwave News that the phones were operating “under normal conditions, that is they were both receiving and transmitting RF signals.”

Volkow’s new study is bound to draw a great deal of attention, if only because she is something of a science superstar. She has a high media profile, turning up on numerous lists of the influential and powerful, including Time magazine’s “Top 100 People Who Shape Our World” (2007) and Washingtonian magazine’s “100 Most Powerful Women” (2009). A decade ago, Volkow was named “Innovator of the Year” by U.S. News and World Report. In 2003, when she left a senior position at BNL to become the head of NIDA, Volkow was the subject of a glowing profile in JAMA, which credited her as having authored “dozens of pioneering brain imaging studies.” Today, she has published more than 440 peer-reviewed articles and 75 book chapters, according to her official NIH profile. Volkow is the great-granddaughter of Leon Trotsky, the Russian revolutionary.

In an e-mail exchange with Microwave News, Volkow said that she recommends taking precautionary measures. “Because we are uncertain of whether there are or are not long term consequences,” she stated, “my recommendation is to use a wired earpiece, use the cell phone in speaker phone mode or text message.” Volkow is the highest-ranking health official in the U.S. to call for caution in the use of cell phones.

The closing sentence of original version of the JAMA paper advised cell phone users to keep the antenna away from the brain by using a wired earpiece. This was edited out in the review/revision process.