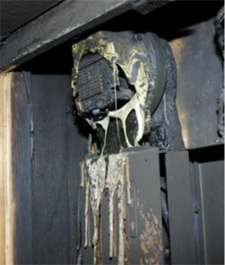 Smart meters are repeatedly catching fire, including here in Michigan. The electric company usually attributes the fires to something else. In Reno, utility employees and contractors have told reporters that the utility has been regularly covering up fires. Two dogs died in a smart meter fire in Detroit. One woman has already died in Nevada, and customers in other states have also been killed by fires. On July 30, 2014, Saskatchewan Province ordered the removal of all smart meters due to fires, and Portland, Oregon ordered the removal of 70,000. Pennsylvania halted its smart meter program for a month due to fires. Meters likely catch fires, says the Ontario Fire Chief’s website,  because “the base plates, or four-pronged sockets that meters plug into, can become compromised and start to burn if they’re old or suffer rough handling during installation.” Said a utility spokesperson: “Unless a homeowner notices problems after the installation — such as lights flickering on and off, or dimming and brightening — there’s no need to worry about a problem with the plate.”  A comprehensive Powerpoint, with numerous pictures of burned meters, from the Ontario Fire Marshall’s Office can be found here.  Many more fire stories can be found at the EMF Safety Network and elsewhere.

Two dogs were killed in a smart meter fire in Detroit. The woman inside the home escaped by crawling out of a window. The man crawled out the front door. Fox News, in its usual incompetent reporting, simply accepted DTE’s assertion that no fires or explosions have been caused by DTE smart meters, when, in fact, they have, and a simple web search would turn them up. Those additional fires and explosions are reported by us below. Every time Fox News does a story on smart meter health effects–supposedly giving time to individuals affected by smart meters–it diligently reports DTE’s claims that smart meters do not cause health problems and gives the bulk of its story time to these assertions. In doing this, they follow in the footsteps of Taylor Fire Marshall John Hager, who claimed to have done a thorough investigation of whether there were any smart meter fires in the U.S., or even the world. His search was so incompetent that he could not even find the stories in the previous post about smart meter fires and explosions in Ann Arbor and Livonia.

A fire ripped through a Bayberry Street home during the installation of a smart meter.  According to the Detroit News the fire caused extensive damage. “DTE spokesman Scott Simons said service technicians were removing an old meter and installing an advanced meter when they saw signs of fire.” CBS Detroit also reported on the fire stating the resident Kirk Lytwyn stated:  “A representative from DTE was out here to change the meters and in the process of changing the meters, from what I understand, it blew on him, blew right in his face,” Lytwyn said. ”Apparently he was wearing the appropriate protective gear.”  10/25/2013.

Bonnie Medd contacted the Smart Meter Education Network immediately after a smart meter exploded on her home. WXYZ and Michigan Radio reported on the explosion. Ms. Medd wrote the following letter after Taylor Fire Marshal John Hager claimed to have done a thorough investigation of whether there were any smart meter fires in the U.S., or even the world: “I am a DTE customer who was excited to get the new technology of the smart meters. Less than two months after installation, the meter exploded and could have caused serious damage. It is NOT true that people who are reporting these fires were people who were already against smart meters and had bias regarding them. We were on Channel 7 News and I’d be happy to talk to the “investigator” [Taylor Fire Marshal John Hager] regarding our issue. DTE is burying these fires and they do NOT get included in any investigations.”

Taylor Fire Chief Claims That No Fires Have Been Started by Smart Meters.

Taylor Fire Marshal John Hager claimed to have done a thorough investigation of whether there were any smart meter fires in the U.S., or even the world. He was apparently incapable of doing a simple web search that would have showed, prior to the date of publication of his “investigation,” a fire in Ann Arbor, a fire in Livonia, the fact that Pennsylvania shut down its entire smart meter program due to fires, and the fact that the Ontario Fire Chiefs’ Association had issued a  report and an extensive Powerpoint presentation on smart meter fires throughout Canada and the U.S. 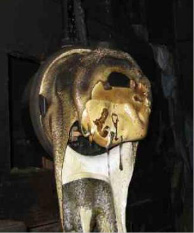 All Smart Meters Ordered Removed from Canadian Province Due to Fires. Sensus smart meters implicated in fires. Cost of removal tops $14 million. The head of the utility oversight did not rule out the possibility of SaskPower using smart meters again some time in the future, but said their reintroduction would have to be carefully evaluated. “We are not going to see these smart meters installed any time soon, that’s for sure,” he said. “We will continue to evaluate the technologies going forward. We’ll continue to evaluate additional smart meters going forward and look at them in the context of Saskatchewan’s climatic conditions to ensure that they will be absolutely safe.”  Read more on the CBC website and at Canada’s Global News.  More on Canadian fires.  In late October 2014, a report issued by a government-appointed investigator stated that water and other contaminants getting into the meters were the likely cause of the fires. 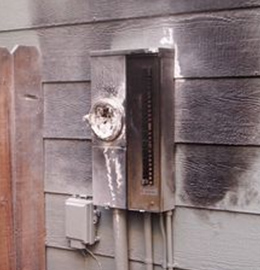 September 2014.  A 61-year-old woman died in a smart meter fire in Reno. Other Nevada fires have maimed individuals or damaged their homes. The fire chief said meter fires are particularly concerning because they start on the outside of the house, won’t be picked up by indoor smoke detectors and can escape immediate notice. Flickering and dimming lights and appliances that burn out for no apparent reason are warning signs. Fire Chief Garrison said that a fire “can burn a long time and enter the attic or the walls. The occupants inside may not even be aware the house is on fire. This is very alarming to me.”

One of the fires in Reno burned a man’s face. The meter burst into flames when he flipped a breaker switch, scorching him. He put out the flames with a fire extinguisher and was treated at a local hospital. Another home in Sparks was significantly damaged.

The fire departments gave the suspect meters to the utility.
This is like handing a gun back to a murder suspect for investigation!

In an interview last week, an electrician who helps NV Energy replace the meters told the Reno Gazette-Journal that often meters would be fixed before the fire department could even be called. The RGJ has withheld his name because he continues to do work for NV Energy and didn’t want to put his employment at risk.

“NV Energy was so quick in having me or one of the other guys out there that the fire department never knew about them,” he said. “We’d have the panel changed out and power turned on within five hours and a guy painting the wall right behind us.”

He said that he’s fixed 15 or 16 burned-out meters in the past two years in Reno, Sparks and Gardnerville.

Read more at the Reno Sparks Gazette. This is one of the most unbiased smart meter stories out there and worth reading for the information it contains. Read more on the cover-ups at the Reno Gazette-Journal.

Fires in the U.S.

There are numerous news stories of smart meter fires in the U.S.  We provide links to a few of them here. See the EMF Safety Network for more stories.

Smart Meter Kills California Man Due to Fire It Caused the Day After Installation. Larry Nikkel died from an electrical fire that consumed his home the day after a smart meter was installed on his home. The day the meter was installed, Larry had tried to boot up his laptop to watch a DVD that evening, but the computer would not function.  The cable box did not work either.  Larry and his brother both heard a very loud, high pitched “snap” coming from the wall.  Later that night, after Larry’s brother had returned home, he received a call from Larry, who said that the ‘house was humming.’ According to electrical engineers, the popping, humming, and appliance damage are all telltale signs of an electrical problem caused by arcing, possibly from a meter that was not installed properly.  Arcing can lead to fires and explosions. The case was settled out of court, showing that the utilities and meter manufacturers were alarmed about the potential to lose the case, as well as more terrible publicity related to their meter program. Read more here.

Portland, Oregon’s utility is replacing 70,000 residential “smart” meters after several meters caught fire. The company is voluntarily recalling the meters, said the utility’s vice president for customer service, because the risk of fire “is small, but it’s totally unacceptable to us.” So interesting that they never say that about the health issues. The meter were installed in 2012.

Smart Meter Likely Cause of Fire in Georgia.

What Causes These Fires?

Some fires have originated in the meter socket and may be a direct consequence of the practice of “hot-swapping” (replacing meters while current is flowing through them). Sometimes it may be the result of poorly trained installers forcing the meter into an older socket where the contacts might not be lining up correctly. Or it can be the result of poor quality control in the meters themselves,as in the Pennsylvania situation where an enormous number of defective meters were delivered to the utility by a manufacturer rushing to meet a deadline to qualify for federal money.

We also hear of fires starting somewhere in a house remote from the meter socket.  And we hear of refrigerator motors, computers and high-end sound systems burning out right after an install.  Apparently the poor power quality (“dirty electricity”) may cause some of these events.
Here is some information from Smart Grid News, a utility industry publication:

http://www.smartgridnews.com/artman/publish/Technologies_Metering/Smart-meter-fire-hazards-A-safe-and-sane-approach-5167.html#.UmvgsLLD-iM
“Forensic evidence suggests that the problem is a known issue commonly called “hot socket”—a case where the blades of the socket receptacle are not making good electrical contact due to spreading, corrosion, or other insulating effect. As a result, the current flow encounters higher resistance at the contacts, causing excessive temperature rise and possible flash-over.”

http://www.smartgridnews.com/artman/publish/Technologies_Metering/Smart-meter-fire-hazards-A-safe-and-sane-approach-5167-page2.html   Video with Dick Hutter, Assoc in Electrical Engineering, worked on large-scale computer equipment for Univac since 1959.  Good practices not used, connections not cleaned and not aligned properly, leads to resistance, which leads to heat, which can lead to fire. They need an electrician to do this, and they don’t want to pay for that. Use a jelly on connections to make a better connection.

http://www.smartgridnews.com/artman/publish/Technologies_Metering/Smart-meter-fire-hazards-A-safe-and-sane-approach-5167-page2.html Mass change-out of meters at rates of thousands of meters per day cannot be done by the experienced meter professionals at the utilities. The migrant meter swappers employed for this work must be compensated in a way to encourage the reporting of suspicious bases rather than being paid by the meter.

Some meters do in fact have sensors to determine if this “hot socket” condition is starting. This alarm is also used to determine that the customer is drawing more current then their service is designed for. Generally the overheating is caused by 3 things.

There are also design flaws in the meters themselves. An important one is that they have lithium batteries to hold data when the power goes out. Lithium batteries explode when heated. They are encased in combustible plastic and placed on homes, sitting in the hot summer sun. Not a good combination. But the sun is not the only thing that will heat the meters. Power surges, and other incidents could and will.