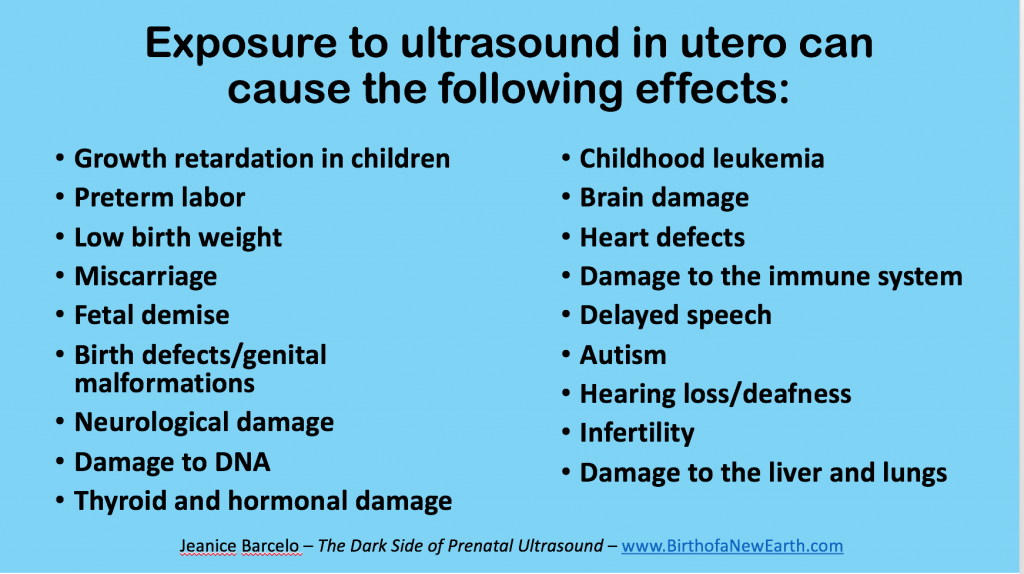 Dear friends – for detailed information regarding the dangers of ultrasound, please see “The Dark Side of Prenatal Ultrasound and the Dangers of Non-Ionizing Radiation.” Here is a short write-up about the book. Excerpt from the book below.

Below is a brief write-up about the book.  Learn more here.

This book offers a ground-breaking analysis of the documented facts concerning the dangers of prenatal ultrasound. Much of the information contained herein has been previously kept hidden from the public. Nonetheless, the book contains nearly 300 pages of sourced material, along with 1300+ citations to confirm that prenatal ultrasound is harming developing babies and should be banned from obstetrics immediately.

Despite the medical establishment repeating the mantra that ultrasound is “just sound waves” and therefore “perfectly safe” during pregnancy, in truth, ultrasound is based on non-ionizing radiation, and many thousands of studies have confirmed that this type of radiation is harmful, especially for children and developing babies in the womb.

As a result of exposure to ultrasound in utero, children are at great risk of being born with radiation-induced genetic mutations that can negatively affect future generations. They may experience damaging reproductive effects that can lead to fertility issues and sterility later in life. They may suffer from radiation-induced brain damage and/or neurodevelopmental delays that can contribute to autism. And there are many childhood diseases that can be traced back to exposure to ultrasonic irradiation in utero.

Parents who care about the welfare of their children will benefit from understanding the facts about this technology and all technologies that utilize non-ionizing radiation (cell phones, cordless phones, baby monitors, etc.). It is time to take a stand to protect the children.

To those who are taking the time to read this book, I thank you. I thank you for caring about the future of Earth’s children and for educating yourself on this most important topic. I trust that the information you are about to read will prove to be invaluable. However, please be aware that some of what you are about to read can be very disturbing. Parents around the world have been duped by the medical establishment into allowing their fragile developing babies to be exposed to a technology that is known to cause sterility, genetic damage, brain damage, intrauterine growth retardation, premature birth, miscarriage, fetal death, and more. Although we are repeatedly told by medical doctors that ultrasound is just sound waves and, therefore, perfectly safe, in fact, ultrasound is based on technologically produced, non‑ionizing radiation, and this type of radiation is extremely harmful.

Massive amounts of research on this topic has already been published, yet many people remain unaware of the facts. As a result, we—and especially our children—are in great danger at this time. The radiation poisoning of our world has escalated out of control, and if we do not put a stop to this madness soon, all life on Earth could literally become extinct.

The devolution of our society has yielded a condition in which our homes, schools, workplaces, automobiles, town squares, shopping centers, medical offices, hospitals, mass transit, etc., all have become completely saturated with noxious, non-ionizing radiation. The devices we have become addicted to, including cell phones, laptop computers, bluetooth devices, tablets, ipads, wifi routers, smart TVs, cordless phones, baby monitors, microwave ovens, GPS devices, and more, have the potential to cause brain damage, cancer and other illnesses; alter our neurology; damage our reproductive capacity; destroy our DNA; disrupt mitochondrial metabolism; change our thoughts and behavior; and ultimately lead to our demise.

It is beyond the scope of this book to go into detail about the full weaponized nature of this entire radiation grid. However, a short quote from Nikola Tesla provides insight into its true purpose.

“Alpha waves in the human brain are between 6 and 8 hertz… All biological systems operate in the same frequency range. The human brain’s alpha waves function in this range and the electrical resonance of the earth is between 6 and 8 hertz. Thus, our entire biological system – the brain and the earth itself – work on the same frequencies. If we can control that resonate system electronically, we can directly control the entire mental system of humankind.”

What is most important for people to understand is that, despite the lies we have been fed by the medical radiation establishment, exposure to technologically produced radiation is harmful. This is true at all levels of exposure for both “ionizing” and “non‑ionizing” radiation—the boundary between which is not at all clear.

Technologically manufactured radiation/frequencies have deleterious effects on all life forms, and this includes ultrasonic frequencies which are now ubiquitous in our world. If we allow the current situation to continue, entire genetic bloodlines will be lost as the ability of Earth’s children to procreate and produce healthy children of their own, will certainly come to an end.

“Cellular, animal, and human ultrasound damage studies have shown various permanent and sometimes cell‑killing, gene scrambling injury to membranes, to tissues, to teeth, to DNA, to mitochondrial and organelle bodies. Ultrasound causes disruptions with subtle, permanent or slow-to-heal nervous system malfunctions causing disabilities. Genetic damage has been proven… Our genetic pool in countries that practice modern medicine is in danger.”

When I began putting this information together in 2013, I had no idea of the severity of the situation. I was simply planning to include the topic of prenatal ultrasound in a chapter in my first book, entitled “Birth Trauma and the Dark Side of Modern Medicine.” My research at that time had already confirmed that pregnant women and their babies were being exposed to a multitude of medically harmful things including, but not limited to, the following:

• A battery of blood tests that deplete the precious blood supply that nourishes baby;

• Repeated, unnecessary, and invasive pelvic exams that can cause bleeding and infection, and leave some pregnant and birthing mothers feeling like they have been medically raped;

• Invasive procedures like amniocentesis and chorionic villus sampling, which can cause miscarriage and lead to blood mixing between Rh positive babies and their Rh negative mothers—leading to fetal fatality;

• Rhogam shots for Rh negative moms that can cause microchimerism and autoimmunity as well as serious neurological problems in the child;

• Prenatal vaccines that are killing and maiming developing babies in large numbers;

• Routine testing for gestational diabetes, which has been referred to as “the diagnosis still looking for a disease” by well known obstetrician, Dr. Michel Odent; and

• Multiple exposures to ultrasound through sonograms and doppler fetal heart monitoring leading to massive irradiation of our children as described throughout this book.

All of the above-mentioned medical interventions have been shown to have little or no benefit in terms of perinatal outcome and all have been shown to cause harm. These interventions have served only to instigate an unprecedented and dangerous push for the induction of labor which has led to at least one in every three babies in the U.S. (in some cases the numbers are as high as 44%) enduring medical attempts to forcibly eject them from the womb before they are ready to born.

Sadly, 20—25% of all premature births in the U.S. are purposely caused by the medical establishment through the induction of labor. Induced babies have a huge risk of ending up in neonatal intensive care (up to a 64% increased chance) and are also very likely to be forcibly cut out of their mother’s bodies through cesarean section (a 67% increased chance). The physiological and psychological effects of these medical interventions are serious and life-long.

I knew all of this before I began writing my first book in 2013, and so I was sure I could easily put together a chapter on the hazards of modern prenatal care and the dangers of prenatal ultrasound. What I did not realize at that time, however, is that my research into the topic of ultrasound would lead me down a rabbit hole so deep that I would not be able to find the bottom. Hence what was originally intended to be a small section of a chapter in my first book has necessitated several additional volumes.

When I began researching the topic of ultrasound, I had no idea that ultrasound actually is radiation. Prior to that time, I had actually believed the medical lie that ultrasound is “just sound waves” and therefore, not dangerous at all compared to x‑rays. This is why I felt perfectly comfortable allowing myself and my developing babies to be exposed to ultrasound.

From this point forward, I will strongly hesitate to allow any medical doctor to expose me to ultrasound, and during pregnancy, ultrasound should be forbidden. Ultrasound is radiation and this fact can easily be confirmed by glancing at the website of the U.S. Food and Drug Administration (FDA), where ultrasound is listed in the section entitled “Radiation-Emitting Products.”

However, despite the FDA’s claim, study after study has confirmed that ultrasound does in fact produce very similar damage to that caused by X‑rays and other forms of ionizing radiation. This includes damage at the cellular and DNA levels, chromosomal aberrations, genetic mutations, mitochondrial disruption, damaging reproductive effects, and much more. Some of the research in this field has been available for decades, yet there are “no federal radiation safety performance standards for diagnostic ultrasound.” We need to ask ourselves why.

Without a doubt, there are powerful forces at work that wish to keep the radiation issue under wraps. Their objective is to keep ultrasound “deployed” in obstetrics for as long as possible under the guise that it is somehow beneficial for “prenatal care.” However, parents need to be aware. Prenatal ultrasound is being linked to fetal growth retardation, preterm labor, miscarriage, low birth weight, fetal abnormalities, fetal demise, hearing loss, cancer, neurological damage, brain damage, autism, damage to the immune system, delayed speech, and more.

Ultrasound is being used to deliberately induce infertility (funded by eugenicists and New World Order depopulation enthusiasts, Bill and Melinda Gates), to purposefully destroy cells, and as a specific form of mind control that will allow for the remote control of brain activity and the manipulation of human emotions and behavior. All of these facts will be methodically laid out throughout this book.

Some of what you are about to read may be difficult to digest. However, it is imperative for us to understand the level of darkness we are up against so that we can protect ourselves and our children from harm.

This work is dedicated to the children who have already been exposed to this technology and those who are yet to be born, with a prayer that parents immediately awaken to the dangers of prenatal ultrasound so that the use of this technology during pregnancy will come to an end.