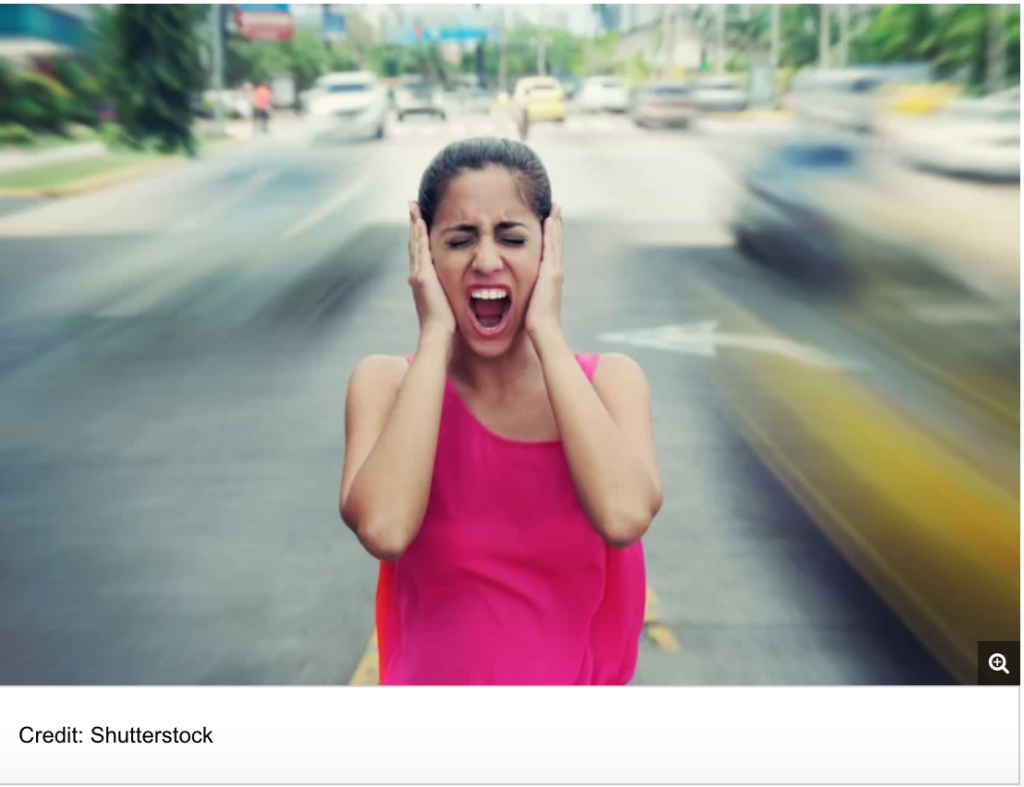 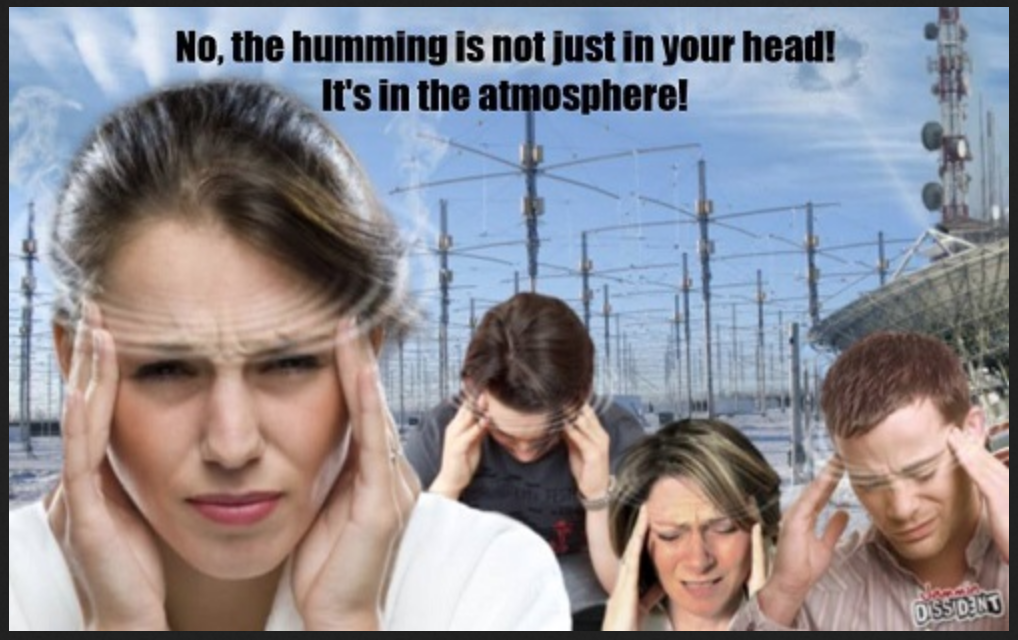 Yes, I can hear them. And I am one of a growing number of people that can also hear these noxious frequencies which sound like they are emanating directly from the hell realms where tortured souls are screaming in agony and begging to be released.

We need to put the breaks on these technologies pronto or I fear we will have a repeat of what is alleged to have happened in Atlantis — i.e., the misuse of this type of energy with crystals caused the entire continent to be blown up (implosion?) and submerged under water.

There are horrible sounds all around us only a small group of people can hear. They almost always come from machines — sometimes intentionally, and sometimes by accident. They’re loud enough to be annoying and cause headaches in people sensitive to them, though it seems they aren’t usually loud enough to cause permanent health issues. And scientists have no firm idea of how common these sounds are or how much damage, if any, they’re doing to society.

That’s the upshot of more than a decade of research by Timothy Leighton, a professor of acoustics at the University of Southampton in England, into a class of sounds called “ultrasonics” or “ultrasound.” He spoke about his work at the 175th meeting of the Acoustical Society of America (ASA) yesterday (May 9).

Ultrasonics are not well-defined, Leighton said in an interview with Live Science before his talk. In theory, he said, they’re sounds that are too high-pitched for people to hear. But in practice, they’re sounds that are right on the edge of hearing for infants, young people, some adult women and other groups with particularly acute hearing. And for those people, ultrasonics represent a growing problem that is not well studied or well understood, Leighton said. [Infographic: The Loudest Animals]

“A number of people were coming to me, and they were saying, ‘I feel ill in certain buildings,'” Leighton told Live Science. “No one else can hear it, and I’ve been to my doctor, and I’ve been to have my hearing checked. And everybody says it’s in my mind; I’m making it up.”

Part of the problem, according to Leighton, is that very few researchers are studying this issue.

“I think you’d be lucky to find even six people around the world working on this,” Leighton said. “And that’s, I think, why many sufferers ended up at my door.”

That isn’t to say that Leighton’s work is outside the scientific mainstream; he was one of two co-chairs of an invited session on high-frequency sound at the ASA meeting and has received The Royal Society’s Clifford Paterson Medal for separate research into underwater acoustics. But most acoustical researchers just aren’t studying high-frequency sound in human spaces; when Live Science reached out to a number of acoustics experts outside Leighton’s immediate circle of colleagues for comment on this article, the vast majority said they didn’t have the knowledge to comment.

Leighton started his early work on ultrasonic waves by going to buildings where people reported having symptoms. While he couldn’t hear the sounds, he recorded them using his microphones and consistently found ultrasonic frequencies.

“These are places where you might have a footfall of 3 [million] or 4 million people a year,” he said. “So it dawned on me that we were putting ultrasound into public places where a minority but a large number of people are going to be affected.”

And the effects aren’t trivial.

“If you’re in the zone [of an ultrasonic sound] and you’re one of the sensitive people, you’ll get headaches, nausea, tinnitus [ringing in the ears] and [various other symptoms],” Leighton said. “And once exposure stops, you recover. After about an hour, you get better.”

The illness in response to ultrasonic exposure might sound spooky to the point of superstition or quack theory, and researchers don’t understand quite why it happens. But it’s backed up by decades’ worth of consistent experiments by a number of different researchers.

Still, Leighton is one of a handful of experts on the subject, and he has no idea how many people are impacted by ultrasonics or how severe the effects are on a population scale.

The most famous supposedly ultrasonic event occurred when American diplomats in Cuba suffered a strange constellation of symptoms that officials initially attributed to some sort of ultrasonic weapon. And although the claim hasn’t held up under scrutiny, that was perhaps not entirely nutty; the most severe symptoms of ultrasonic-wave exposure do include headaches, tinnitus and hearing loss similar to what the U.S. diplomats encountered in Cuba. (Leighton, like most scientists, is skeptical that ultrasonic weapons were actually involved in that event.)

In reality, Leighton said, the reason ultrasonics are a problem is not that in bizarre, extreme cases they might expose a tiny fraction of the population to brain or permanent hearing damage. Rather, ultrasonics are likely exposing a large, young, vulnerable fraction of the population to discomfort, annoyance and the stigma of hearing things others can’t. And all that could easily be avoided.

But why can’t everyone hear these sounds?

Back in the late 1960s and early ’70s, researchers for the first time systematically examined what sort of sounds could cause problems in the workplace but were high-pitched enough that they didn’t become problematic in limited, low-volume doses. Based on those studies, governments around the world arrived at a common guideline for ultrasonics in the workplace: 20 kilohertz at medium volumes, or 20,000 vibrations per second.

That’s a very high-pitched sound — much higher than most adults can hear. In the video below, a tone slowly rises from a superlow 20-hertz tone to a 1,000-times-higher 20 kilohertz. I’m a 26-year-old man, and I can’t hear anything once the tone rises past about 16 kilohertz. (But I can’t say for certain that this isn’t the result of my headphones maxing out, rather than my hearing.)

But it’s not too high for all humans to hear. Just about everyone loses some hearing at the high end of the spectrum as they age. (Anyone who was in high school in the late 2000s will likely remember the annoying “mosquito” ringtone that teenagers could hear but teachers generally could not.) And men tend to lose their hearing in those ranges before women do, according to most research into hearing loss.

The problem with those 1970s studies, Leighton said, is that they were conducted mostly on adult men, many of whom worked in loud jobs and likely had fairly weak hearing. But governments all over the world based ultrasonics-related regulations on those studies, Leighton said. And those regulations, intended for loud workplaces, have come to dominate public spaces in developed countrieswhere people susceptible to ultrasonic waves might find themselves unwittingly exposed.

“If you’ve got such sounds being generated in the classroom, the teacher might not hear anything and think the children are being misbehaved,” Leighton said. “But the children might hear a high-pitched whine and so be disturbed by that.”

“Or,” he added, “a grandmother with a baby in her arms can walk into​ a public place where there’s a lot of ultrasonic exposure, and the baby will be perturbed, and the grandmother will have absolutely no idea anything’s going on.”

There just aren’t that many researchers looking into ambient ultrasonics, Leighton said, so data on just where ultrasonics turn up is limited. So far, he said, his crowdsourced experiments have just managed to map ultrasonics in central London, but they’ve already provided some clues as to where ultrasonics might be found.

There’s no single culprit for ultrasonic waves, Leighton said. A number of machines make them totally unintentionally. Some loudspeakers play them during test cycles. And Leighton said he’s found manufacturers of those sorts of devices that are interested in his research and fixing their ultrasonic problems. Other industries, though, like the makers of devices designed to keep away pests from yards and basements, are more resistant.

The next step for people who are worried about ultrasonics, Leighton said, is to collect a lot more data.

“We really can’t [test common ultrasonic machines] on young people and hurt them. I mean, it’s just not ethical,” he said. “And it’s alarming because you could go out to a hardware shop, and for $50, you could buy a pest scarer that will expose your neighbor’s child to far higher levels. And I’m never allowed to expose somebody to that in a lab and test them. That’s an irony.”

But, Leighton said, interest is growing.

Leighton recently put out a call for papers on ultrasonics and received about 30 manuscripts, about 20 of which were worth publishing. It seems likely, he suggested, that researchers will understand the waves and their effects on populations far better in the coming years than they do right now.