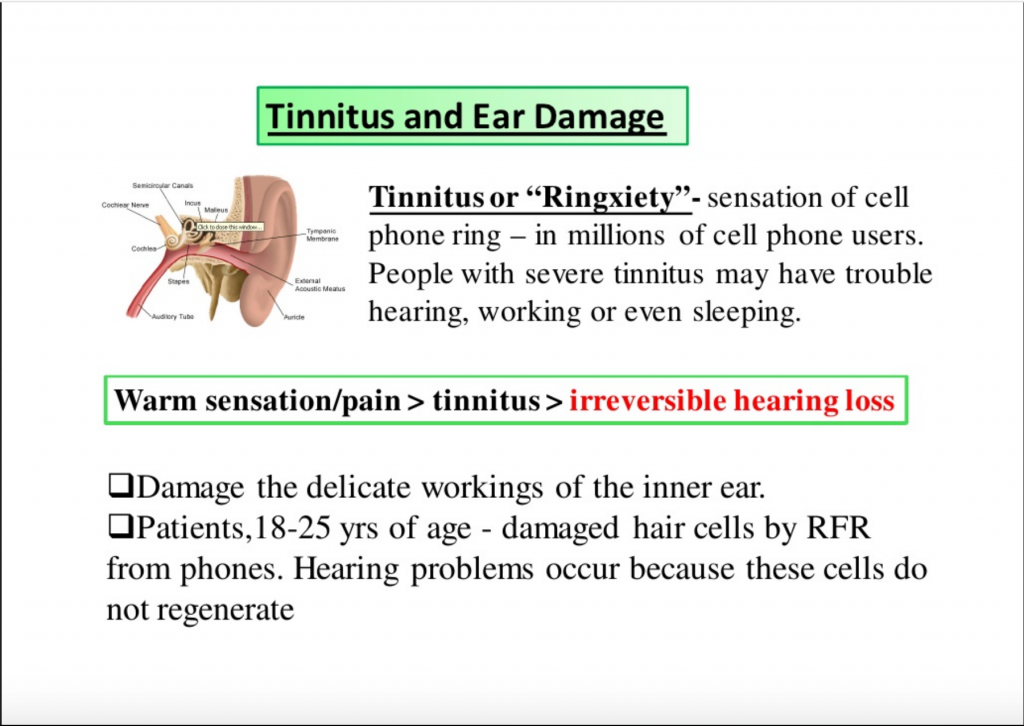 This article discusses the surreal reality of RF/microwave radiation frequencies and the attack on our hearing.

This is a major public health disaster and has been sent to the following with a request for remedial action.

I developed Tinnitus or the ringing of the ears within six weeks of the Cell Phone Tower being installed in front of my home in early 2009. Once measuring equipment arrived we determined that our lounge was in direct line of sight of the Tower and was receiving the highest readings of Microwave Radiation.

I visited an Audiologist at the Auckland University Audiology Clinic. They confirmed that I had recently developed Tinnitus, however my age (30s), excellent health, excellent hearing meant that they were unable to determine the cause. However most people do develop Tinnitus but generally in the 60s and unfortunately it is permanent.

The cause is a well documented Microwave Hearing Effect as detailed in the below studies. I took this all the way up to the Director General of Health. I ended up in contact with the lead scientist on Microwave Hearing who also worked for Motorola. Although the measured power levels were very low for an immediate effect he had not exposed humans to months of Microwave Radiation and therefore could not rule this out as the cause.

To date 40% of visitors to this site are now reading this page on Tinnitus. You are not alone in your ill health so please add your story to the Health Register as together we will make a difference.

Overall, no statistically significant increased risk for mobile phone use and tinnitus was observed in subgroups, except for the subgroup of ipsilateral use for 4 years and longer (OR 1.95; CI 1.00-3.80). The authors concluded that high intensity and long duration of mobile phone use might be associated with tinnitus.

The human auditory response to pulses of radiofrequency (RF) energy, commonly called RF hearing, is a well established phenomenon. RF induced sounds can be characterized as low intensity sounds because, in general, a quiet environment is required for the auditory response. The sound is similar to other common sounds such as a click, buzz, hiss, knock, or chirp. Effective radiofrequencies range from 2.4 to 10000 MHz, but an individual’s ability to hear RF induced sounds is dependent upon high frequency acoustic hearing in the kHz range above about 5 kHz. The site of conversion of RF energy to acoustic energy is within or peripheral to the cochlea, and once the cochlea is stimulated, the detection of RF induced sounds in humans and RF induced auditory responses in animals is similar to acoustic sound detection. The fundamental frequency of RF induced sounds is independent of the frequency of the radiowaves but dependent upon head dimensions. The auditory response has been shown to be dependent upon the energy in a single pulse and not on average power density. The weight of evidence of the results of human, animal, and modeling studies supports the thermoelastic expansion theory as the explanation for the RF hearing phenomenon. RF induced sounds involve the perception via bone conduction of thermally generated sound transients, that is, audible sounds are produced by rapid thermal expansion resulting from a calculated temperature rise of only 5 x 10(-6) degrees C in tissue at the threshold level due to absorption of the energy in the RF pulse. The hearing of RF induced sounds at exposure levels many orders of magnitude greater than the hearing threshold is considered to be a biological effect without an accompanying health effect. This conclusion is supported by a comparison of pressure induced in the body by RF pulses to pressure associated with hazardous acoustic energy and clinical ultrasound procedures. Copyright 2003 Wiley-Liss, Inc.

The hearing of microwave pulses is a unique exception to the airborne or bone-conducted sound energy normally encountered in human auditory perception. The hearing apparatus commonly responds to airborne or bone-conducted acoustic or sound pressure waves in the audible frequency range. But the hearing of microwave pulses involves electromagnetic waves whose frequency ranges from hundreds of MHz to tens of GHz. Since electromagnetic waves (e.g., light) are seen but not heard, the report of auditory perception of microwave pulses was at once astonishing and intriguing. Moreover, it stood in sharp contrast to the responses associated with continuous-wave microwave radiation. Experimental and theoretical studies have shown that the microwave auditory phenomenon does not arise from an interaction of microwave pulses directly with the auditory nerves or neurons along the auditory neurophysiological pathways of the central nervous system. Instead, the microwave pulse, upon absorption by soft tissues in the head, launches a thermoelastic wave of acoustic pressure that travels by bone conduction to the inner ear. There, it activates the cochlear receptors via the same process involved for normal hearing. Aside from tissue heating, microwave auditory effect is the most widely accepted biological effect of microwave radiation with a known mechanism of interaction: the thermoelastic theory. The phenomenon, mechanism, power requirement, pressure amplitude, and auditory thresholds of microwave hearing are discussed in this paper. A specific emphasis is placed on human exposures to wireless communication fields and magnetic resonance imaging (MRI) coils.

Two profoundly hard-of-hearing and deaf patients were examined by non-invasive extracranial magnetic stimulation (EMS) in an effort to determine whether EMS could evoke auditory sensations. The patients were fitted with standard earplugs and were stimulated at the auricle, the mastoid and the temporal lobe area. The threshold of auditory sensation (TAS) was determined at each stimulus position and found to be approximately 20-40% of the maximum EMS level (2.0 Tesla). The TAS was generally lowest in mastoid stimulation, but was variable, and dependent on the angle and position of the stimulating coil relative to the skull. Middle-ear muscle reflex (MEMR) tests performed by EMS of the auricle, mastoid and temporal lobe area contralateral to the probe ear were negative. It was concluded that EMS of the auditory system, particularly the mastoid area, can evoke auditory sensations in cochlea-deaf ears, and that this technique deserves further study as a non-invasive procedure for evaluating potential cochlear implant patients in conjunction with electrostimulation.

Electromagnetic stimulation of the auditory system: effects and side-effects. – 1993
http://www.ncbi.nlm.nih.gov/pubmed/8210963?ordinalpos=1&itool=EntrezSystem2.PEntrez.Pubmed.Pubmed_ResultsPanel.Pubmed_DiscoveryPanel.Pubmed_Discovery_RA&linkpos=4&log$=relatedarticles&logdbfrom=pubmed

Extracranial electromagnetic stimulation (EMS) is a recently developed clinical technique which may be used in place of conventional transcutaneous electrical stimulation to activate the central and peripheral nervous systems. This technique is widely used in neurology and otolaryngology for non-invasive stimulation of the brain and facial nerve. EMS uses electromagnetic field pulses which pass unimpeded through the cranium and soft tissues to activate excitable membranes of volume conductors. In this series of studies, the effects and side-effects of electromagnetic stimulation on the auditory system of humans and experimental animals were investigated. In the first study, 18 profoundly hard-of-hearing and deaf patients who were candidates for cochlear implants were examined by non-invasive EMS in an effort to determine whether EMS could stimulate residual neurons in the cochlea, 8th nerve proper, or higher auditory brain centers, and evoke auditory sensations. The patients were stimulated with a magnetic coil positioned at the (1) auricle, (2) mastoid process, and (3) the temporal lobe area. EMS elicited auditory sensations in 26 ears (of 14 patients/subjects). The lowest threshold of auditory sensation (TAS) at each stimulus position was found to be at the 20% EMS level, with a range of 20-50% of the maximum level (2.0 Tesla), and with equal sensitivity in each coil position.

Results of BERA indicated no statistically significant differences between exposure and control subjects. In audiometric evaluation, hearing threshold of people occupationally exposed to RF were found higher than the control group subjects for frequencies of 4000 Hz and 8000 Hz in terms of bone and air conduction of right and left ear (p < 0.01). CONCLUSIONS: The results of traditional audiometer indicated that RF promotes sensorineural hearing loss and affects cochlea parts related to 4000 Hz and 8000 Hz. These findings may have immediate implications and considerations for workplace safety in order to provide an occupationally safe environment to employees working in such settings.

When human subjects are irradiated with pulse modulated microwave energy they report the perception of a sound that appears to originate from within or slightly behind the head. Three of the possible mechanisms are examined using first order mathematical approximations and several simplifying assumptions. The results show that while all three (radiation pressure, strictive force and thermal expansion) are capable of producing the phenomenon, the stress resulting from thermal expansion may be so great that it masks the effect of the others completely.

“The human auditory response to pulses of radiofrequency (RF) energy, commonly called RF hearing, is a well established phenomenon. RF induced sounds can be characterized as low intensity sounds because, in general, a quiet environment is required for the auditory response. The sound is similar to other common sounds such as a click, buzz, hiss, knock, or chirp. Effective radiofrequencies range from 2.4 to 10 000 MHz, but an individual’s ability to hear RF induced sounds is dependent upon high frequency acoustic hearing in the kHz range above about 5 kHz. The site of conversion of RF energy to acoustic energy is within or peripheral to the cochlea, and once the cochlea is stimulated, the detection of RF induced sounds in humans and RF induced auditory responses in animals is similar to acoustic sound detection.”