Reports are flooding in from around the world about the lethal threat of mobile communications to birds.

Carrier Pigeons No Longer Able To Find Their Way Home 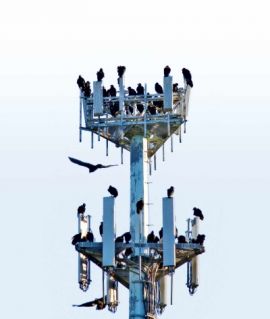 Once a mobile phone tower is finally shut down, it becomes very popular with birds!

“Birds are masters of orientation; they can pilot themselves home from hundreds of kilo­metres away. But this season up to 50 per cent of birds have lost their way on homing flight competitions. A rapidly changing en­­vironment is to blame, according to experts. Reiner Schrörs be­­lieves that increasing radiation from mobile phone towers hinders the birds’ capacity to orient. When one such mast was put into operation about 300 m away from his dovecote four or five years ago, Schrörs immediately detected a considerable change in the birds’ behaviour—as did a breeder nearby. “They went completely mad,” reports the 59-year-old. Belgian veterinary Fernand Marien also believes that massive change in the environment caused by radiation from modern communication methods may be making it ever more difficult for carrier pigeons to find their way home.”1

From a lecture by Wolfgang Maes, expert in ecological building biology and journalist: “Birds and bats left their nests after new towers were installed nearby. (…) Prof. Dr. Andras Varga, head of the Hygiene Institute at the University of Heidelberg, published his research results in 1991: “The German limit values are too high! We radiated hen eggs in an incubator with microwaves measuring below our limit values, and every embryo was killed! Not a single chick hatched; not one survived the radiation. Healthy chicks hatched from the non-radiated control group, without exception.”

“I work in bird migration research. There was an ‘insider’ report that went around a few years ago stating that bird migration in Israel has been strongly disrupted. The reason was/is this: bird migration is particularly concentrated over Israel i.e. the large birds coming from the north (storks, raptors, pelicans) are filtered through a kind of ‘funnel’, so to speak. This means that the birds fly south through the Jordan Valley within a narrow corridor. But because at that time the densest mobile communications network in the world was present in Israel (and perhaps still is?), these large birds experienced disruption to their sense of orientation—so much so that many of them were found on the Arabian peninsula. Their usual path should follow the Nile up over Sinai. Yet mobile communication interfered with the birds’ programmed migration direction so severely that they took a completely different route.”2

“We have a dove breeder in our association who detected an electrosmog pollution of 1.4 volts per metre (V/m) in his dovecote. The breeding period there has dropped by half. The young birds are no longer fed by the parents, and starve to death; there is also a greater incidence of deformity. Similar reports are coming in about kestrels and swallows. For swallows, the problem is the lack of midges and insects in the air. Since swallows can only catch their food during flight, there’s just not much out there to catch because midges drop dead to the ground at 0.2 V/m. I haven’t yet found out how much other insects can tolerate.”3

“Electromagnetic radiation emitted by towers disturbs house sparrows and other small birds,” according to Dr. Sainudeen Pattazhy, president of the Kerala Environmental Researchers’ Association in India. “The radiation—900 to 1,800 MHz—can damage the thin skull of chicks and the shells of eggs. Microwaves can interfere with the birds’ sensory abilities and misguide them while they are navigating and preying.”4

An investigation by biologist and member of the Spanish Association for Ornithology, Alfonso Balmori, reveals that certain species of bird leave areas that are exposed to strong radiation from mobile communications and only return home after the radiation ex­­­posure disappears or is strongly re­­du­ced. Balmori also observed changes in feathering, among other things, which is considered by ornithologists to be the first sign of chronic stress, as well as changes in breeding and flight behaviour. With his research in Valladolid, Balmori refers to similar observations in London, where there has been a significant drop in the sparrow population and where increasing pollution from electromagnetic fields (as emitted by mobile communications networks, for example) is currently viewed by ornithologists as the most likely cause for the bird’s disappearance from the city. This drop is thought to be so severe that sparrows formerly present in great numbers in London are now at risk of extinction and ought to be put on the red list of endangered species.

These effects appear to be highly dependent on dosage. Balmori, for example, did not detect any noticeable change in areas of low exposure, while the effects in highly exposed areas were obvious. In Germany, too, the sparrow was re­­cently placed on the ‘vulnerable’ list of endangered species. In the Hanseatic city of Hamburg alone, the sparrow population is thought to have fallen by 80 per cent!