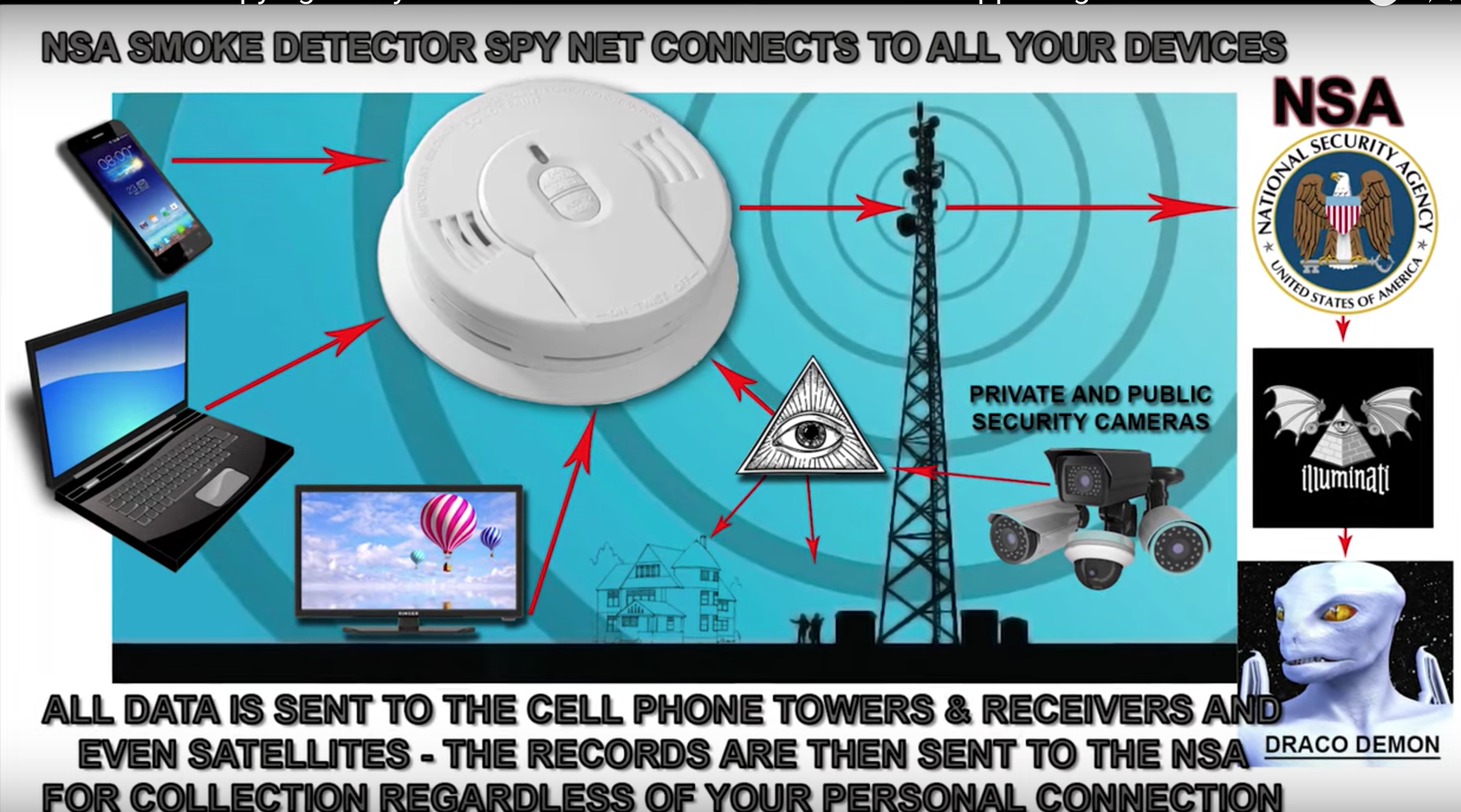 The video below contains important information (in the first 10 minutes) that confirms that smoke detectors are incredibly dangerous.  My own personal experience with these devices involves becoming extremely ill when new smoke detectors were recently installed in my home.   I experienced three consecutive days of a wildly beating heart that was skipping beats, flip-flopping several times an hour, and racing.  This was combined with screaming “tinnitus,” sleeplessness, headaches, night sweats, and more. I finally discovered (thanks to my Acousticom 2 meter) that the smoke detectors were the culprit and were sending out pulses of radiation non-stop. I presumed this meant they were ultrasonic since they had no battery and I know that ultrasonic frequencies are also extremely dangerous.  Naturally, they were all immediately removed from my home.

“Since 2001, after 9-11, the U.S. government implemented programs to be able to spy on everybody, everywhere.  Through their tech partners, they have systematically put a system into place that literally gives them the all-seeing eye.  They can see into your home.  They can see all of your internet activity.  They know everything you do on the internet.  They can hear what you’re doing through your microphone and see you through your camera.  But it goes beyond that.  We’re talking about technology that allows them to see into your home, even if you don’t even have a computer or a cell phone or a tablet or a smart TV.  Even if you don’t have any of that technology in your home, they can still see and hear in your home.  It sounds insane, but it’s true.  They have the technology to build the all-seeing eye, and they do that through the smoke detectors.”  They do that through every single smoke detector that is installed.

After 9-11, there was a mandate to replace all smoke detectors throughout the U.S. and this program has been implemented throughout the rest of the world. The smoke detectors broadcast and receive unique microwave frequencies.  So what that means is that the smoke detectors are actually sending out a constant signal, similar to your WiFi router, but it’s on a much different frequency range that is much better at penetrating through walls.  This is a government-only frequency range, which means the government and its tech partners are the only people who have access to not only creating these signals, but also receiving and reading the signals.  All of your electronics, including your computer, your tablet, your cell phone, your smart TVs and any other modern technology… these “appliances” and “devices” — they all connect seamlessly through embedded chips that are in the modern technology and connect to the smoke detectors.  The smoke detectors then send all activity that is occurring on your appliances and devices to the cell phone towers and satellite receivers.  And the NSA has the capability, even if you’re not connected to the internet through your own personal network…  to see what you are doing on your computer, and on your TV, and on your tablet…”