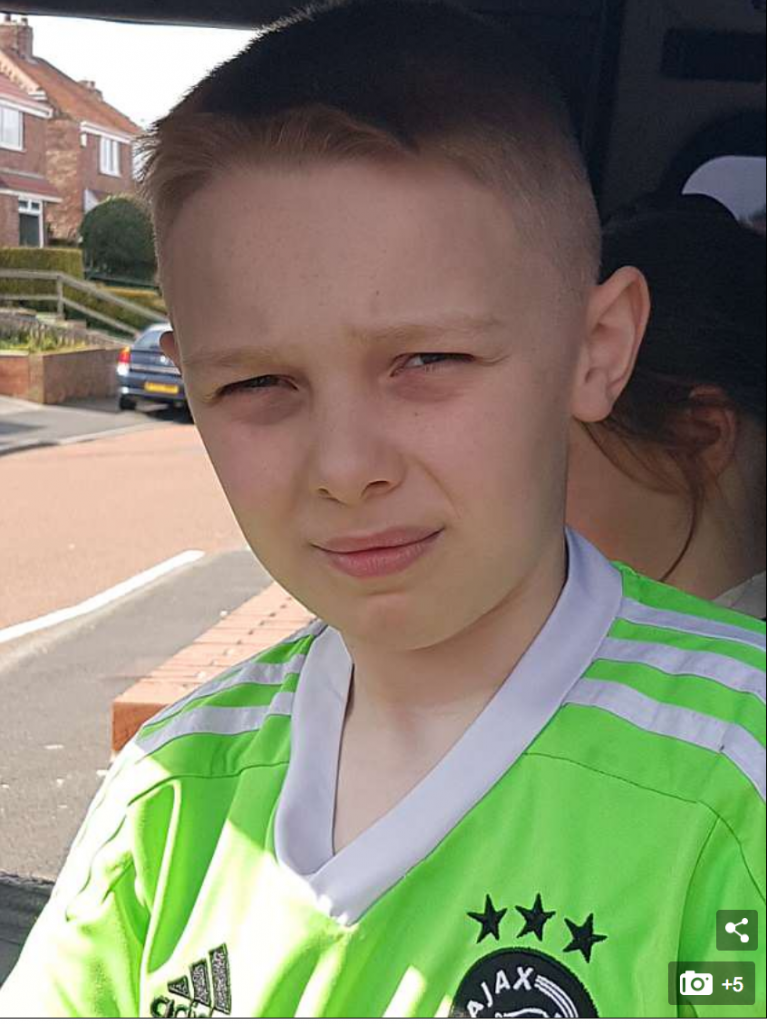 Shaun Drummond, 11, only started experiencing nose bleeds after the lights were installed

– Mark Steele is aware of three women who lost babies since lights were installed
– One local resident gave birth to a deformed child that survived just three hours
– Research suggests light transmitters prevent healthy cell and gene expression
– Such radiation has been linked to cancer, insomnia and mental-health disorders
– Past research found Wi-Fi radiation increases the risk of miscarriages by 50%
– Gateshead council firmly denies ever having used 5G technology in lighting

Radiation given off by state-of-the-art street lamps is wreaking havoc on the residents of Gateshead, according to local Mark Steele.

He said people living in the area are experiencing symptoms of insomnia, nose bleeds and several women have even endured the horror of stillbirths since the introduction of LED lamps that he believes emit 5G radiation.

In his circle alone, Mr Steele, 58, is aware of three women have lost their children since the lights were installed in September 2016, with one giving birth to a deformed child that survived just three hours.

Mr Steele, who was part of the IEEE, which claims to be ‘the world’s largest technical professional organisation dedicated to advancing technology for the benefit of humanity’, said: ‘We are seeing babies dying in the womb as these transmitters are situated outside people’s bedroom windows. It’s a humanitarian crisis.’

Earlier this week Gateshead council put out a Facebook post encouraging people to ignore ‘conspiracy theories’ about the dangers of 5G radiation, adding ‘there is no scientific basis or credible evidence for any of these scare stories’. 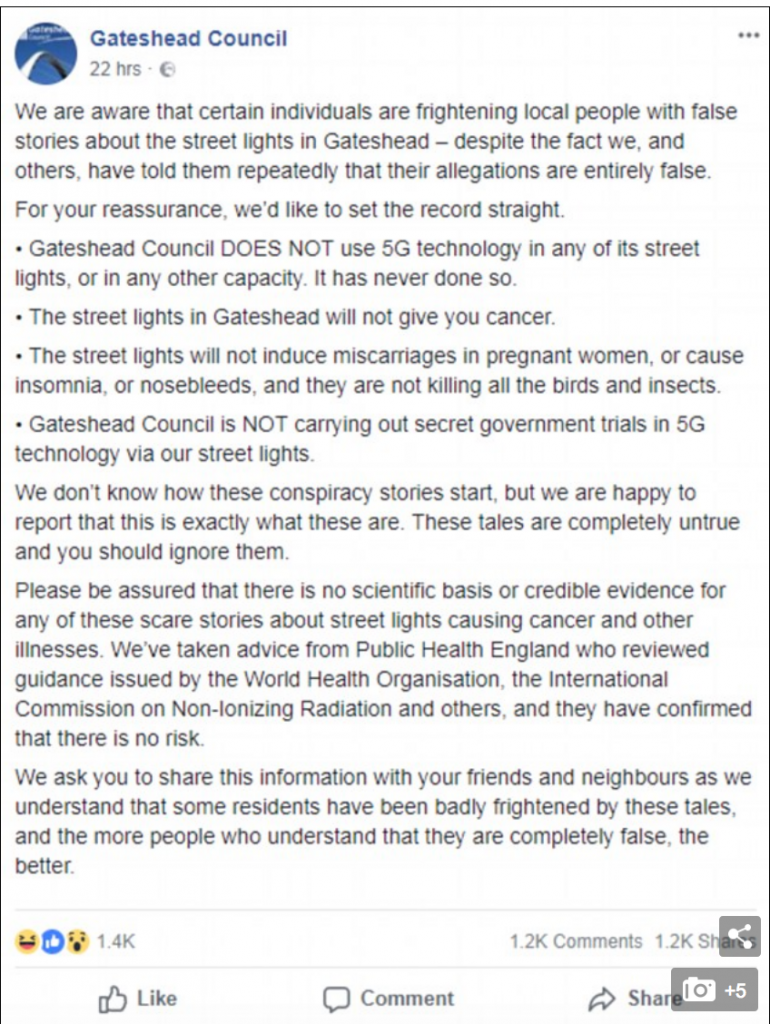 In a Facebook post yesterday, Gateshead Council dismissed concerns over the borough’s street lights as ‘entirely false conspiracy theories’ with ‘no scientific basis or credible evidence’

According to Professor Ulrich Warnke, from the University of Saarland, EMF radiation, which is given out by light transmitters, causes disruption to the body’s nitrogen monoxide system, which keeps cells healthy and controls gene expression.

The European Academy for Environmental Medicine (EUROPAEM) – EMF working group notes such radiation has been linked to cancer, insomnia and mental-health disorders.

UK telecoms regulator Ofcom reportedly plans to launch 5G services, such as lamps and cell towers, throughout Britain by 2020. There are rumours Gateshead is taking part in a ‘secret Government trial’ by rolling out the technology in the borough before then. 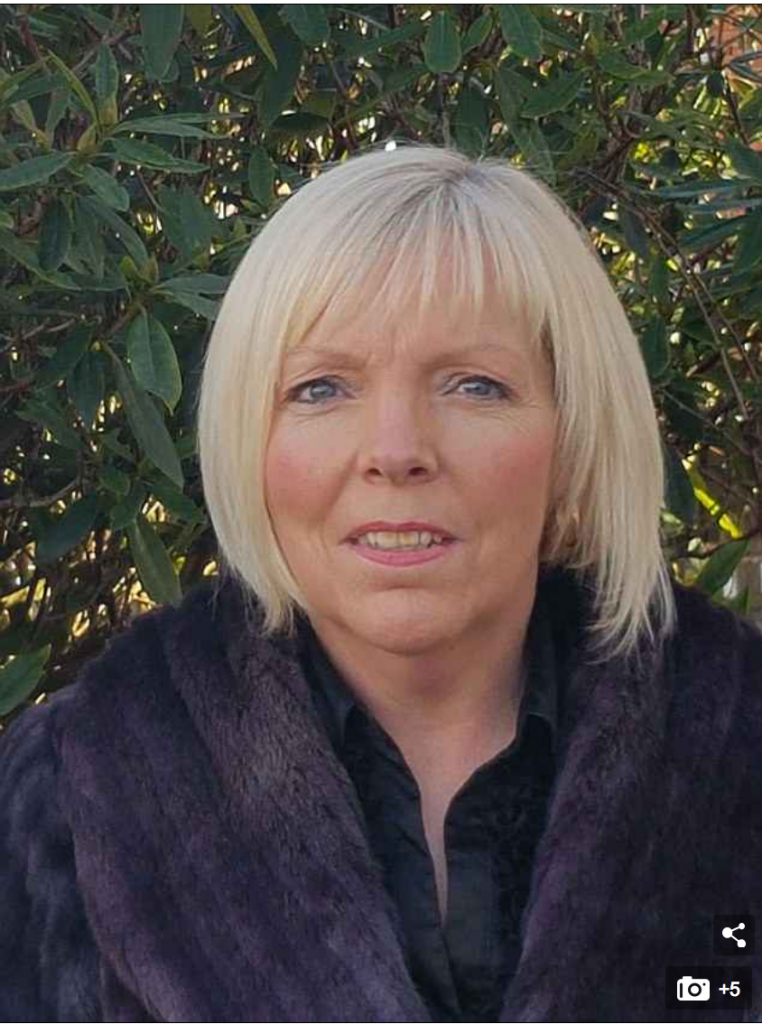 Local resident Shirley Forster, 55, has endured nose bleeds since the lights were fitted in 2016 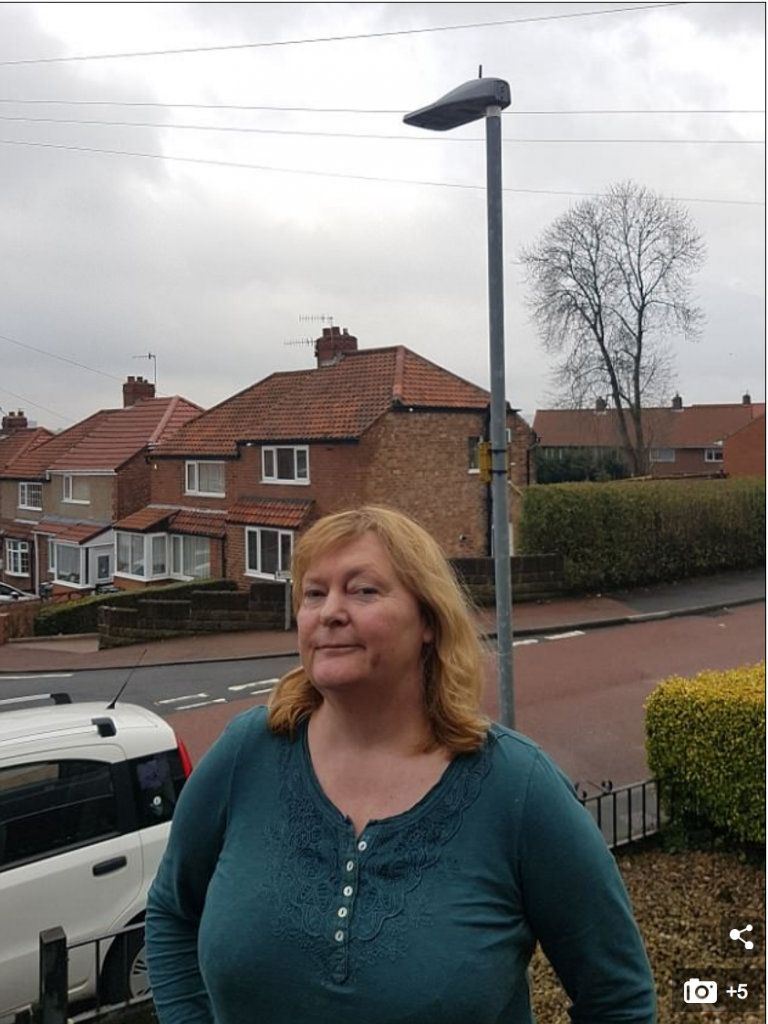 ‘Such miscarriages didn’t occur before the lamps appeared’

Mr Steele said: ‘We’ve got people bleeding from the nose in my locality.

‘We’ve got people who can’t sleep from neurological disorders.

‘What about the poor women across Gatehead who are losing babies at nearly full term?

‘What about the children who will develop cancer from this 5G roll out?’

Mr Steele claims EMF’s damaging effects are evident in the loss of wildlife from his local area.

While driving around Gateshead, which Mr Steele claims has more than 37,000 EMF-emitting lamps, he said: ‘[There are] no small birds in [the] surrounding trees.

‘The sparrows have been annihilated; they’ve wiped out the flying insects.’

In a Facebook post, which has been shared more than 1,200 times, Gateshead Council announced yesterday: ‘Street lights will not induce miscarriages in pregnant women, or cause insomnia, or nosebleeds, and they are not killing all the birds and insects.’

The post adds the borough is not taking part in ‘secret Government trials’ before 5G is rolled out nationwide.

It adds the council has been advised by Public Health England, which reviewed guidance issued by bodies including the World Health Organization, and confirmed the technology carries no health risks.

The post urges people share the statement with those ‘badly frightened’ by the claims and ends with ‘the more people who understand that they are completely false, the better’.

Despite Gateshead council’s claim that they are not using 5G, Mr Steele said: ‘The transmitter operates at 868 – 870 MHz. That is a specific 5G spectrum.

‘The increase in transmitters even if they did operate at 2G – 3G, as the council have stated, would make them 5G’.

Previous studies have linked such radiation to ‘internal stress’, which may lead to genetic damage that can cause expectant mothers to miscarry.

Those exposed to the highest levels of EMF radiation are 48 per cent more likely to lose their baby than women exposed to the lowest amounts, according to a 2017 study by the Kaiser Permanente Division of Research in Oakland.

The World Health Organization (WHO) recommends MF radiation, to which everyone is exposed to to some extent, be studied for its effect on pregnancies.

The WHO classifies EMF as a ‘possible human carcinogen’ but does not consider electromagnetic hypersensitivity (EHS) a condition. EHS is a claimed sensitivity to EMF, leading to headache, fatigue and stress.

Commenting on the matter, The Parliamentary Assembly from the Council of Europe, said: ‘Waiting for high levels of scientific and clinical proof before taking action to prevent well-known risks can lead to very high health and economic costs, as was the case with asbestos, leaded petrol and tobacco.’ 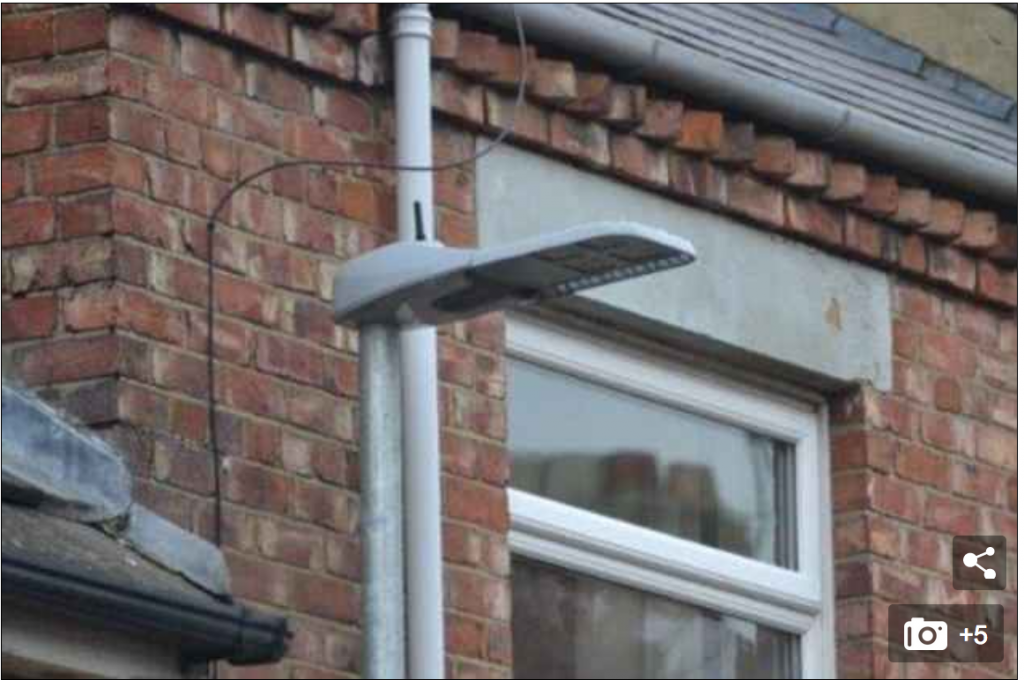 EMF radiation, which is given out by light transmitters (pictured), causes disruption to the body’s nitrogen monoxide system, which keeps cells healthy and controls gene expression

What is being done about it?

Researchers from a network known as EMF Scientists, which includes doctors from the University of Columbia, are appealing to the UN to encourage the WHO to develop stricter EMF guidelines, while also educating the public on the risks.

In January 2015, the French parliament adopted a comprehensive law that protects the general public from excessive exposure to electromagnetic waves.

Among other things, the legislation has banned Wi-Fi in nurseries for children under three years old. It also requires primary schools teaching children under 11 to only turn Wi-Fi on when it is being used for specific lessons.

As of February 2016, 220 scientists from 42 countries have signed an international Appeal, directed to the UN and WHO, calling for protection from EMF exposure.

According to EUROPAEM, the only treatment for EMF-related illnesses is to eliminate or reduce the radiation source.

HOW CAN PREGNANT WOMEN REDUCE THEIR RADIATION EXPOSURE?

A study released in December 2017 suggested radiation-emitting devices, such as Wi-Fi and mobile phones, increase pregnant women’s risk of suffering a miscarriage by nearly 50 per cent.

The researchers, from the Kaiser Permanente Division of Research in Oakland, recommend expectant mothers reduce their exposure by:

– Keeping mobile phones away from their abdomens and not storing them in their pockets
– Turning Wi-Fi off when it is not in use, particularly while sleeping
– Keeping mobile phones on airplane mood when they are not in use
– Talking on speakerphone when making calls and keeping them as brief as possible
– Not using appliances that give off such radiation when in the car seeing as levels are already increased