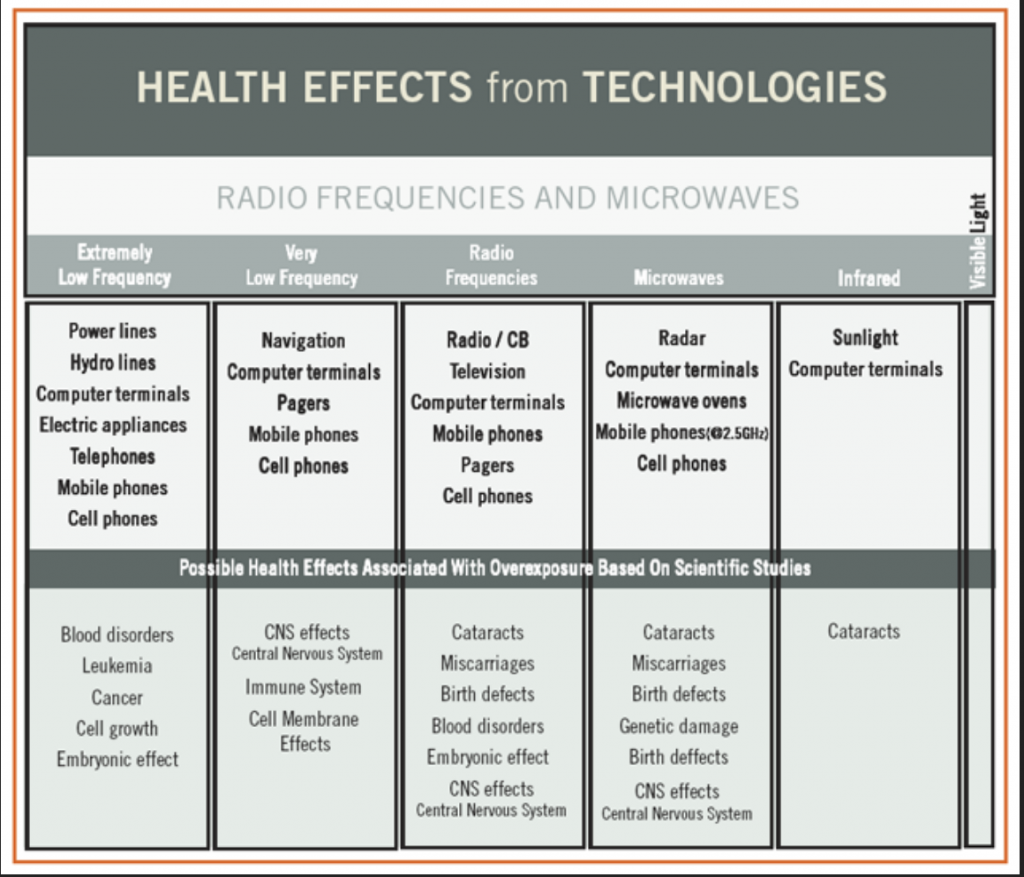 • MWV EMFs cause at least 13 neuropsychiatric effects including depression in humans.

Non-thermal microwave/lower frequency electromagnetic fields (EMFs) act via voltage-gated calcium channel (VGCC) activation. Calcium channel blockers block EMF effects and several types of additional evidence confirm this mechanism. Low intensity microwave EMFs have been proposed to produce neuropsychiatric effects, sometimes called microwave syndrome, and the focus of this review is whether these are indeed well documented and consistent with the known mechanism(s) of action of such EMFs. VGCCs occur in very high densities throughout the nervous system and have near universal roles in release of neurotransmitters and neuroendocrine hormones. Soviet and Western literature shows that much of the impact of non-thermal microwave exposures in experimental animals occurs in the brain and peripheral nervous system, such that nervous system histology and function show diverse and substantial changes. These may be generated through roles of VGCC activation, producing excessive neurotransmitter/ neuroendocrine release as well as oxidative/nitrosative stress and other responses. Excessive VGCC activity has been shown from genetic polymorphism studies to have roles in producing neuropsychiatric changes in humans. Two U.S. government reports from the 1970s to 1980s provide evidence for many neuropsychiatric effects of non-thermal microwave EMFs, based on occupational exposure studies. 18 more recent epidemiological studies, provide substantial evidence that microwave EMFs from cell/mobile phone base stations, excessive cell/mobile phone usage and from wireless smart meters can each produce similar patterns of neuropsychiatric effects, with several of these studies showing clear dose–response relationships. Lesser evidence from 6 additional studies suggests that short wave, radio station, occupational and digital TV antenna exposures may produce similar neuropsychiatric effects. Among the more commonly reported changes are sleep disturbance/insomnia, headache, depression/depressive symptoms, fatigue/tiredness, dysesthesia, concentration/attention dysfunction, memory changes, dizziness, irritability, loss of appetite/body weight, restlessness/anxiety, nausea, skin burning/tingling/dermographism and EEG changes. In summary, then, the mechanism of action of microwave EMFs, the role of the VGCCs in the brain, the impact of non-thermal EMFs on the brain, extensive epidemiological studies performed over the past 50 years, and five criteria testing for causality, all collectively show that various non-thermal microwave EMF exposures produce diverse neuropsychiatric effects… 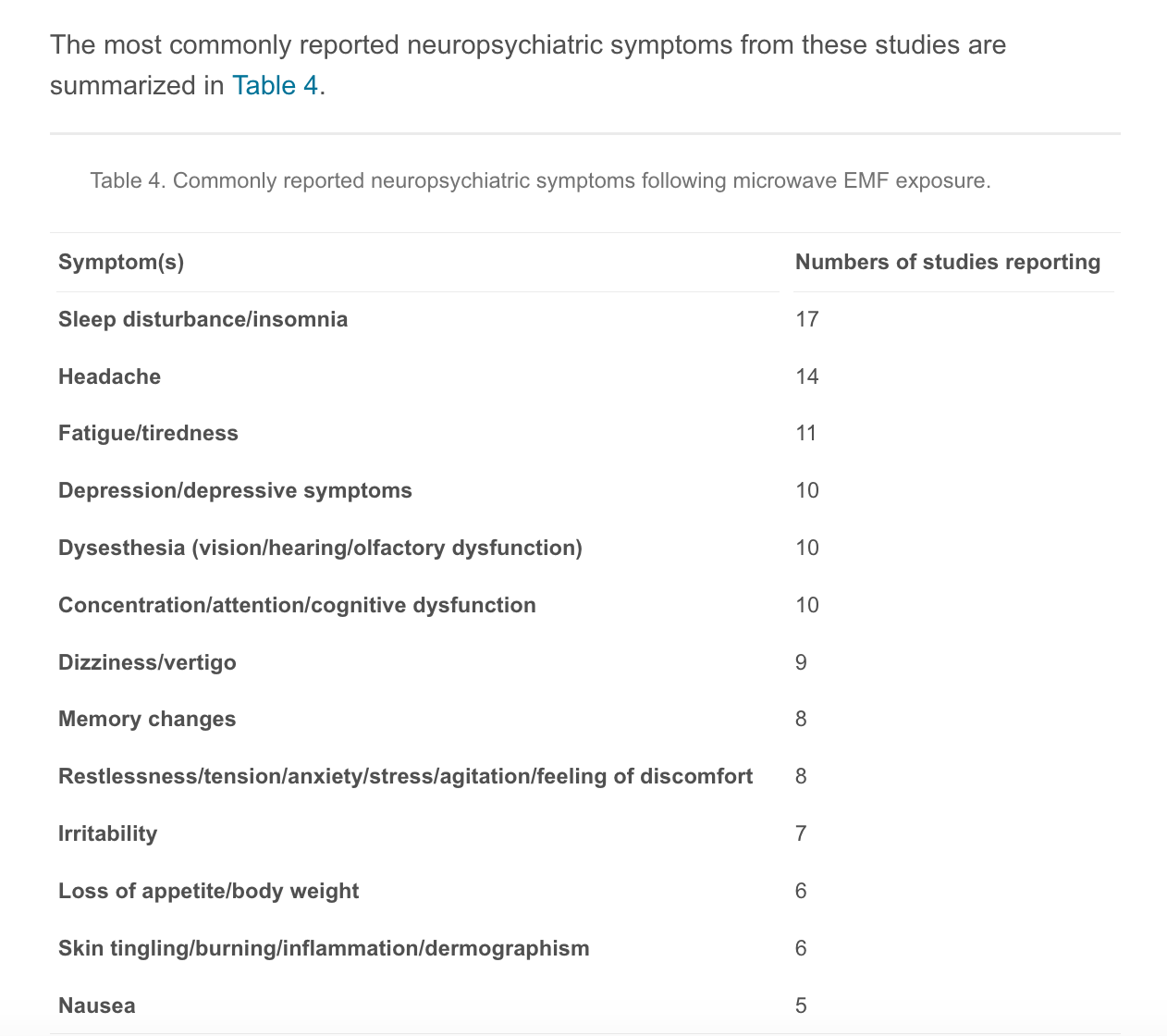 All the symptoms listed in Table 4 should be considered established parts of microwave syndrome (Hocking, 2001; Johnson Liakouris, 1998). Even if the statistical significance in each study was of the lowest statistical significance (p < .05) one would expect only 1 positive study to occur at random out of the 22 studies included here. Because many individual symptoms were not surveyed in many individual studies, the expectation is substantially lower than that. Each of these, having shown positive results in 5 or more studies are highly unlikely, therefore, to have occurred by chance. Stong statistical significance is also seen for individual neuropsychiatric effects reported to have p < 0.001 in the Eger and Jahn (2010) and Oto et al. (1994) studies (see Table 3).

EEG changes may well be part of microwave syndrome, as well. While none of the studies described in Table 3 measured EEGs, six studies of human occupational exposure cited in the Raines (1981) showed EEG changes (Baranski and Edelwejn, 1975; Bise, 1978; Dumanskij and Shandala, 1974; Lerner, 1980; Sheppard and Eisenbud, 1977). Murbach et al. (2014) cited 10 human studies in support of their statement that “the most consistently reported effects (of mobile phone use) in various studies conducted by different laboratories are changes in the electroencephalogram (EEG) power spectrum.” Three recent studies (Lustenberger et al., 2013; Schmid et al., 2012a,b) and several earlier studies cited in Wagner et al. (1998) have each shown EEG changes in sleeping humans exposed to non-thermal pulsed microwave fields. Two recent studies showed EEG changes in persons exposed to Wi-Fi fields (Maganioti et al., 2010; Papageorgiou et al., 2011). Lai (1997) described 8 animal studies showing changes in EEG patterns in animals exposed to non-thermal EMFs and three additional animal studies were described in Tolgskaya and Gordon (1973). With the exception of the 6 studies cited in the second sentence in this paragraph, all of these are direct experimental studies which are not, therefore, susceptible to the questions of causality that can be raised about epidemiological studies…”

One of the citations from the previous paragraph, Bise (1978) reviewed earlier studies of low level microwave frequency exposures in humans and concluded that such EMFs produced the following neuropsychiatric effects: headache, fatigue, irritability, dizziness, loss of appetite, sleepiness, sweating, difficulty of concentration, memory loss, depression, emotional instability, dermographism, tremor, hallucinations and insomnia. The strong similarity of this list from 37 years ago and the list in Table 4 should be noted. The Bise (1978) list is based on occupational exposure studies whereas the current list in Table 4 is based primarily on EMF exposures from cell/mobile phone base stations, from heavy cell phone usage and from smart meters, three types of exposures that did not exist in 1978. The strong similarity between the Bise (1978) list and the current one 37 years later alone produces a compelling argument that the 11 neuropsychiatric effects found on both lists are caused by exposure to multiple types of low-intensity microwave EMFs.”…