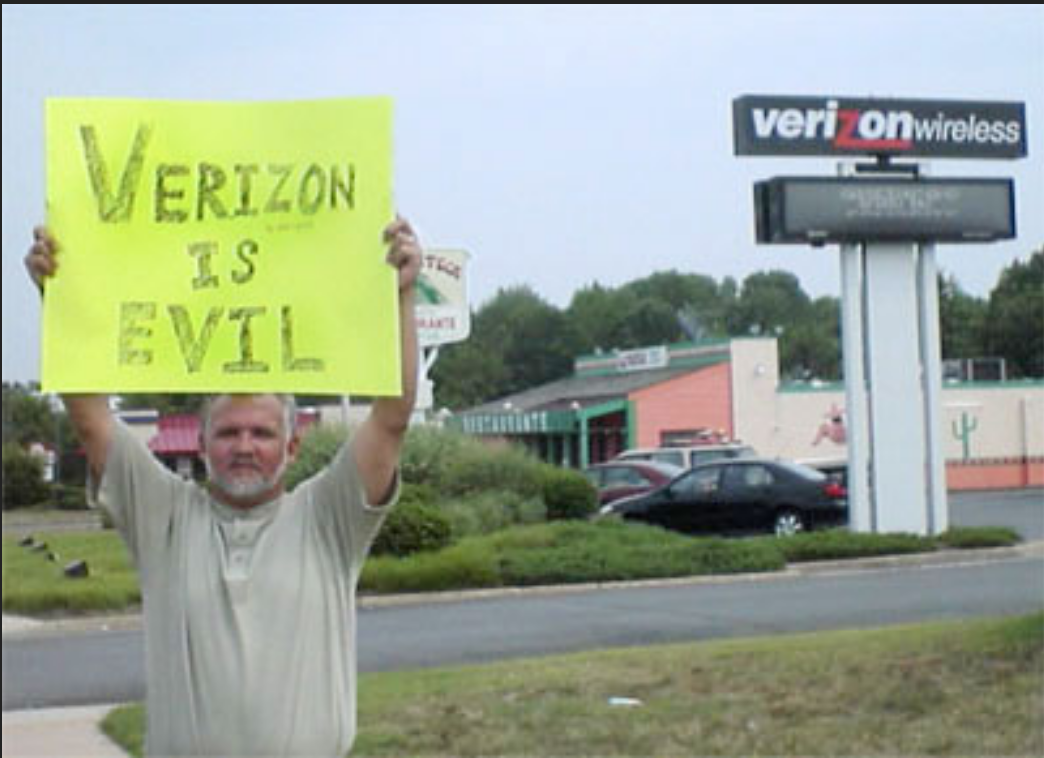 These filthy, conniving, double-dealing corporations and politicians need to be returned to hell.  This is quite a story.  Thanks to Kate Kheel for sharing this info.

Summary (Is on Medium)  https://bit.ly/2GhgpJF

On March 2nd, 2018, a proposed settlement was announced between Verizon NY and the NY Public Service Commission (NYPSC) and parties.

This has been based on a multi-year two track investigation: Track 1 detailed the deterioration of the state utility infrastructure and a lack of maintenance and upgrades. Track 2 found massive financial cross-subsidies from Verizon NY to Verizon Wireless and other subsidiaries, and this caused losses of over $1 billion a year annually. It also helped to inflate rates and diverted billions from upgrading or finishing the cities.

However, this proposed settlement has abandoned the multi-billion dollar financial cross subsidy investigation and Governor Cuomo appears to be responsible. While the Governor has been banging his chest about the Charter-Spectrum obligations, (which is important) he has not only helped to erase this investigation, but at the same time gifted Verizon $85 million in government grants, and attempted to slip a plagiarized piece of telco-created legislation into the state budget to help Verizon Wireless. And all of this is to cover over the holes in the failed 100Mbps broadband plan for NY.

This Memorandum lays out why this investigation of Verizon New York is important and should be continued and expanded, as well as highlights the issues and questions about Cuomo’s broadband plan and interference with the settlement.

Our Request: On April 16th, 2018, New Networks Institute & the IRREGULATORS filed a request with the NYPSC. Our research helped to trigger the original investigation as we uncovered the massive, multi-billion dollar shell game, based on Verizon NY’s financial annual reports and other data.

§ We are calling to halt this proposed settlement and continue the investigation with new questions and discovery.

2) Local Phone customers paid billions of dollars to do upgrades for “massive deployment of fiber optics” and “losses”. Starting in 2005, there were a series of rate increases on basic phone service to pay for FTTP, “fiber to the home” services. By 2010, this money was used for wireless. Customers paid $1000.00 or more per line extra in rate increases, about $4.5 billion in extra fees, 2005–2015.

3) These increases have been built into rates and have been charged to all customers, including low income families and rural areas.

4) Verizon NY has lost over $1 billion annually — and has not paid most taxes; the “losses” were not created by Local Service. In fact, Verizon NY lost $15.7 billion from 2010–2016, with $7.2 billion in tax benefits (excluding extraordinary items).

5) The opening chart of the Memorandum shows the financial shell game. Verizon NY paid billions of dollars in unwarranted expenses, making Local Service look unprofitable. In just 2016, Verizon NY Local Service had $1.2 billion in revenue but was charged $723 million in “Corporate Operations” expenses (for lawyers, lobbyists and the corporate jets) and $1.4 billion in construction. Where did all this money go?

The Plan: Verizon has announced it is a wireless-only entertainment company and the plan, working with the FCC, is to dismantle the state utilities, shut off the copper wires and force customers onto wireless — and make the fiber optic wires private property — for the wireless company, or FiOS — which will be a wireless service in the future.

§ Did Governor Cuomo kill off the investigation of the financial cross-subsidies between Verizon NY and Verizon’s subsidiaries, especially Verizon Wireless?

§ Why did Cuomo attempt to place a piece of plagiarized, industry-created wireless legislation into the state budget?

§ Why did Cuomo give Verizon New York $85 million in broadband when Verizon was paid via multiple rate increases to deploy fiber optic broadband?

§ What role did Leecia Roberta Eve play with these deals, if any? She is Verizon’s VP in charge of New York, New Jersey and Connecticut, and “she previously served as the chief economic development adviser to Governor Cuomo”, and is a potential for being the next NY Attorney General.

§ The Spectrum-Charter commitments are important, but not compared to the billions in Verizon cross-subsidies, the expense dumping, or the lack of tax payments.

§ Verizon should have upgraded some areas that Spectrum is now asked to complete.

We suggest reading the report and stories about the proposed settlement and project:

§ Part 1: Cuomo’s ties to this investigation and Verizon

§ Summary of the 8 year project tied to the investigation

About Us: New Networks Institute, and our new addition, the IRREGULATORS, are an independent consortium of senior telecom experts, analysts, forensic auditors, and lawyers who are former senior staffers from the FCC, state advocate and Attorneys General Office experts and lawyers, and telecom consultants. Members of the group have been working together, in different configurations, since 1999.