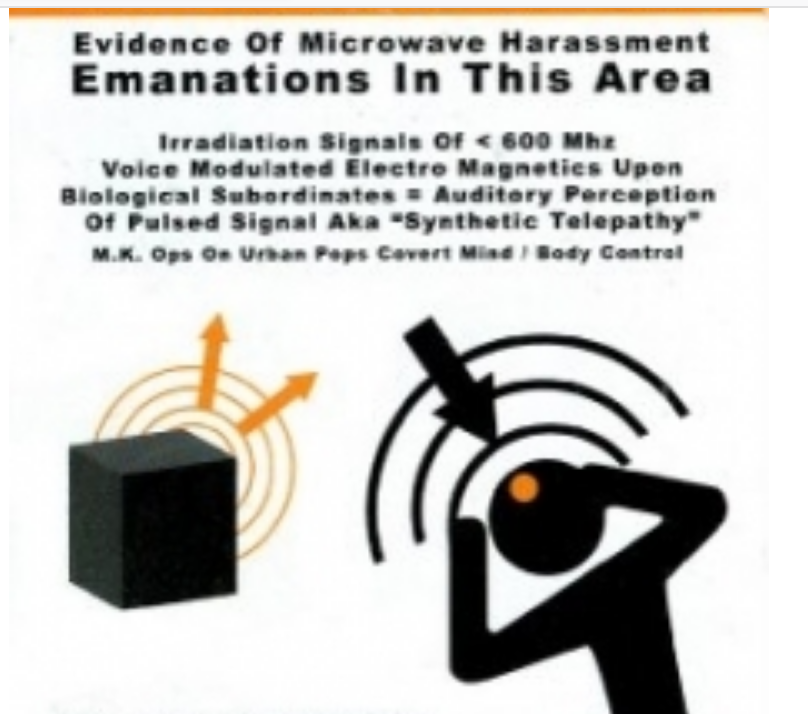 As one of the 50 million Americans now suffering from “tinnitus,” I can attest to the fact that many human adults can hear ultrasonic and RF/Microwave frequencies.  This phenomenon is known as “microwave hearing,” or “microwave auditory effect,” and has been discussed in scientific literature for at least 70 years.

Ultrasonic, radiowave, and microwave frequencies travel in waves that are millions and billions of times more intense than anything the human ear was designed to experience.  When these waves hit our ears, the eardrum, cilia, and calcite crystals within the ears begin to uncontrollably shake and vibrate, expanding and contracting, morphing and deforming at the rate of millions of times per second.  All this is happening while our hearing apparatus attempts to respond to the unexpected and unprecedented frequencies coming in.

To me, these frequencies sometimes feel and sound like a hurricane howling through my ears, blowing, shaking, vibrating and relentlessly pummeling the inner workings of my hearing system.  24/7, I hear an incessant, mosquito-like, metallic hum and I am certain that what I am hearing are the alien and destructive artificial frequencies now running through the entire power grid and through every inch of air space on Long Island due to cell towers, microwave antennas and transmitters, satellites, wifi routers, smart meters, etc.

The normal frequency range that a human eardrum is designed to respond to is approximately 20 – 20,000 hertz.

Ultrasonic, RF, and microwave frequencies, on the other hand, are in the megahertz (millions of hertz) and gigahertz (billions of hertz) range. That is, they are millions and billions of times more intense than anything we were designed to experience.

Whoever thought it was a good idea to expose humans and other vulnerable animals, birds and insects to these lethal frequencies ought to be executed on site because they are dangerously and diabolically insane.

These frequencies are generated through the destruction of atoms and are based on attacking the basic building blocks of manifest reality. When atoms are blown through atom smashing machines and their electrons are knocked out of their orbits or out of the atoms entirely, they struggle frantically to put themselves back together, emitting manmade radiation in the effort.  This is what mad scientists are capitalizing on. This is what the entire communications industry (as well and the military and medical establishment) have harnessed.  And these frequencies are nothing less than biological weapons designed to destroy all life.

Please keep in mind that our skull bones absorb enormous amounts of radiation and radiation force.  And this is partially why our skull bones will begin to shake and vibrate uncontrollably when they are hit with these frequencies. The ears pick up the vibration from the skull bones and translate this as sound, which makes the experience of “tinnitus” even worse.  Earplugs will not drown out the noise because the skull bones are still vibrating from all the radiation and lethal frequencies they are being hit with.  Hence the “noise” is coming from inside the head — a true form of attempted torture.

Children, in particular, are at great risk, because their brain tissue is more absorbent and their skulls are thinner than adults, so they will absorb more radiation and suffer in greater ways.  If you see your young child repeatedly rocking and back and forth with his/her hands over his ears, know that they are hearing and feeling these deadly frequencies and it is time to either make changes in the home in order to lower the radiation/EMF levels, relocate, or watch your child’s health and sanity deteriorate from exposure to noxious and deadly frequencies.

Here are a few important quotes about this topic that people ought to understand.  Many more will be contained in my forthcoming book, “The Dark Side of Prenatal Ultrasound – And the Manmade Radiation that is Destroying Our World.”  Please subscribe to this website if you would like to be kept informed about the release of this material.

“Experimental and theoretical studies have shown that the microwave auditory phenomenon does not arise from an interaction of microwave pulses directly with the auditory nerves or neurons along the auditory neurophysiological pathways of the central nervous system. Instead, the microwave pulse, upon absorption by soft tissues in the head, launches a thermoelastic wave of acoustic pressure that travels by bone conduction to the inner ear. There, it activates the cochlear receptors via the same process involved for normal hearing. Aside from tissue heating, microwave auditory effect is the most widely accepted biological effect of microwave radiation with a known mechanism of interaction: the thermoelastic theory.” — J.C. Lin, Hearing of microwave pulses by humans and animals: effects, mechanism, and thresholds

“The amplitude of the vibration of the air molecules is creating pressure changes extreme enough that your eardrum is stretching out of control and inner hair cells, particularly the high-frequency ones nearest the eardrum, are in danger of being ripped free of their moorings.”
— Seth Horowitz, The Universal Sense: How Hearing Shapes the Mind

“Analysis of data to date suggests that progressive loss of hearing in the very high frequencies (12 kHz) and tinnitus are somehow related to an increased, intense airborne ultrasonic exposure. ‘Subjective nonauditory effects’ or ‘ultrasonic sickness’ characterized by nausea, vomiting, headaches, dizziness, and fullness in the ears are also reported to exist after components of intense airborne ultrasonic exposure.”
— M.L. Lenhardt, Eyes as Fenestrations to the Ears, A Novel Mechanism for High-Frequency and Ultrasonic Hearing

Related article:
Ultrasonic Waves are Everywhere – Can you Hear Them?
/microwave-hearing-and-tinnitus/ultrasonic-waves-are-everywhere-can-you-hear-them/

2 thoughts on “Is It “Tinnitus” or is it Microwave and/or Ultrasonic Hearing?”