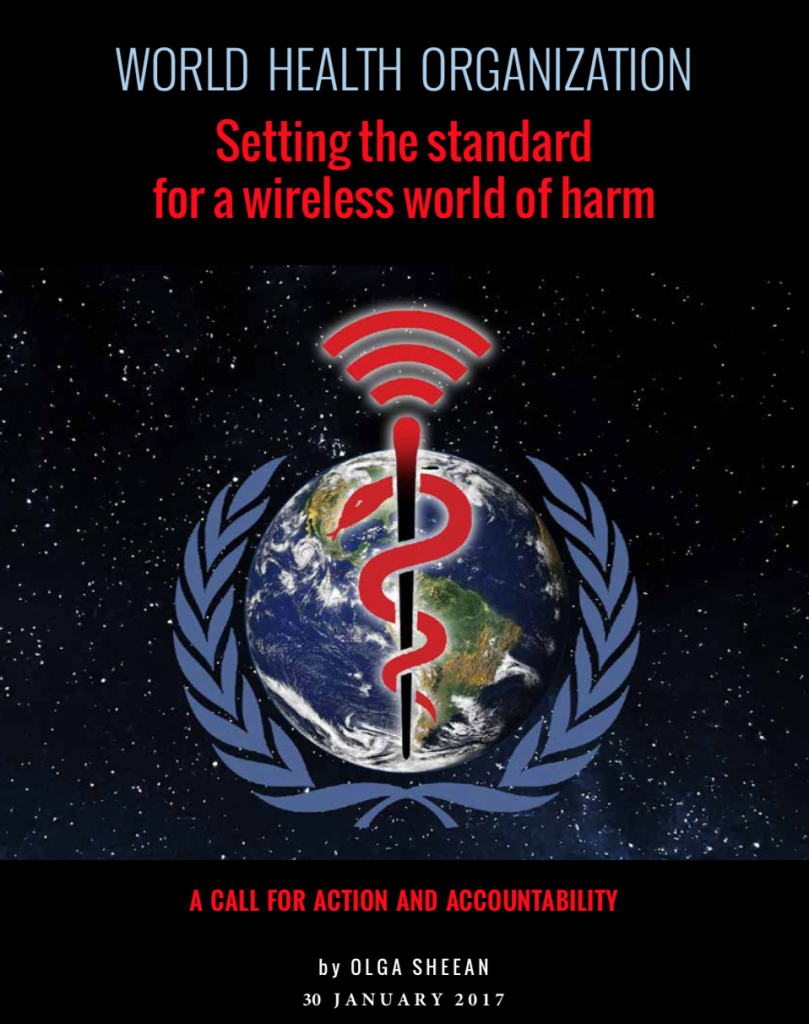 Dear friends – Below is a powerful opening letter written by Olga Sheean and directed to various criminal “leaders” within the World Health Organization and the United Nations.  Olga is the author of EMF Off – A Call to Consciousness in our Misguidedly Microwaved World.  She once worked for the United Nations and is now calling them to task.  This is a powerful, powerful letter and the rest of this document is totally worth reading.  The entire document, entitled WORLD HEALTH ORGANIZATION:  SETTING THE STANDARD FOR A WIRELESS WORLD OF HARM can be viewed here.  Please take the time to look it over, to pass this information on, and to know that these organizations are completely working for the dark side and they must be dismantled.  They have no legitimacy whatsoever except to those who wish to exist within a luciferian-controlled world.

The World Health Organization is failing the Earth’s citizens in the most blatant, destructive manner. In December 2016, a VOTE of NO CONFIDENCE in WHO and its EMF Project was initiated in response to the growing concerns among the millions of global citizens being harmed by radiofrequency/ microwave radiation. The petition has been signed by thousands of individuals worldwide, with more adding their vote every day as they become aware of how WHO’s denial of the proven dangers has stripped them of their health, rights, livelihood, productivity and protection from their own governments. As of today, 30 January 2017, there are 2,003 names on the list (attached), with more being added daily. Details of the voting initiative are shown in appendix 3. Recognizing the significance of this growing discontent with your wilful neglect, and heeding the urgent call to protective action, are important first steps towards addressing an epidemic that threatens all forms of life on our planet. Nothing short of full implementation of the recommendations presented herein will resolve this crisis.

Radiofrequency/microwave radiation is everywhere—constantly and increasingly emanating from cell phones, WiFi routers, cell towers and telecommunications satellites. It is proliferating unchecked and people are suffering and dying because of it. Via its International EMF Project, WHO is supposed to be protecting us from the harm- ful effects of this radiation—radiation that we cannot see, smell or taste, even though it penetrates and affects every cell of our electromagnetic bodies.

WHO is failing to protect its global citizens from this pervasive pollutant in four key ways:

This document provides details of these inexcusable failures and what urgently needs to be done to address them. It also outlines what WHO must do to reverse this destructive course—for itself and for the global citizens it is supposed to protect. One of the most crucial and urgent steps to be taken is the replacement of the head of the EMF Project, Emilie van Deventer (an electrical engineer with zero health credentials) with an independent, unbiased, medically qualified professional who has firsthand experience and knowledge of microwave sickness/ electro-sensitivity and the many other devastating consequences, such as brain cancer, neurological disorders, DNA damage and infertility.

You can no longer claim ignorance or justify any further delay. Only one question remains, and what you do next will clearly demonstrate where you stand on this issue:

The world is watching and we are waiting for your response.

The full document can also be freely downloaded at http://olgasheean.com/who-harm