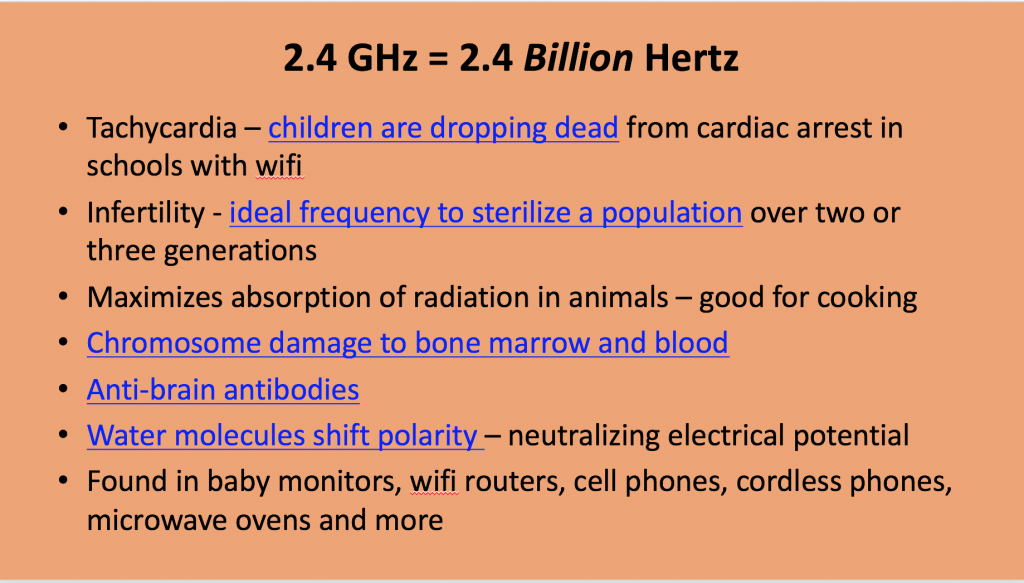 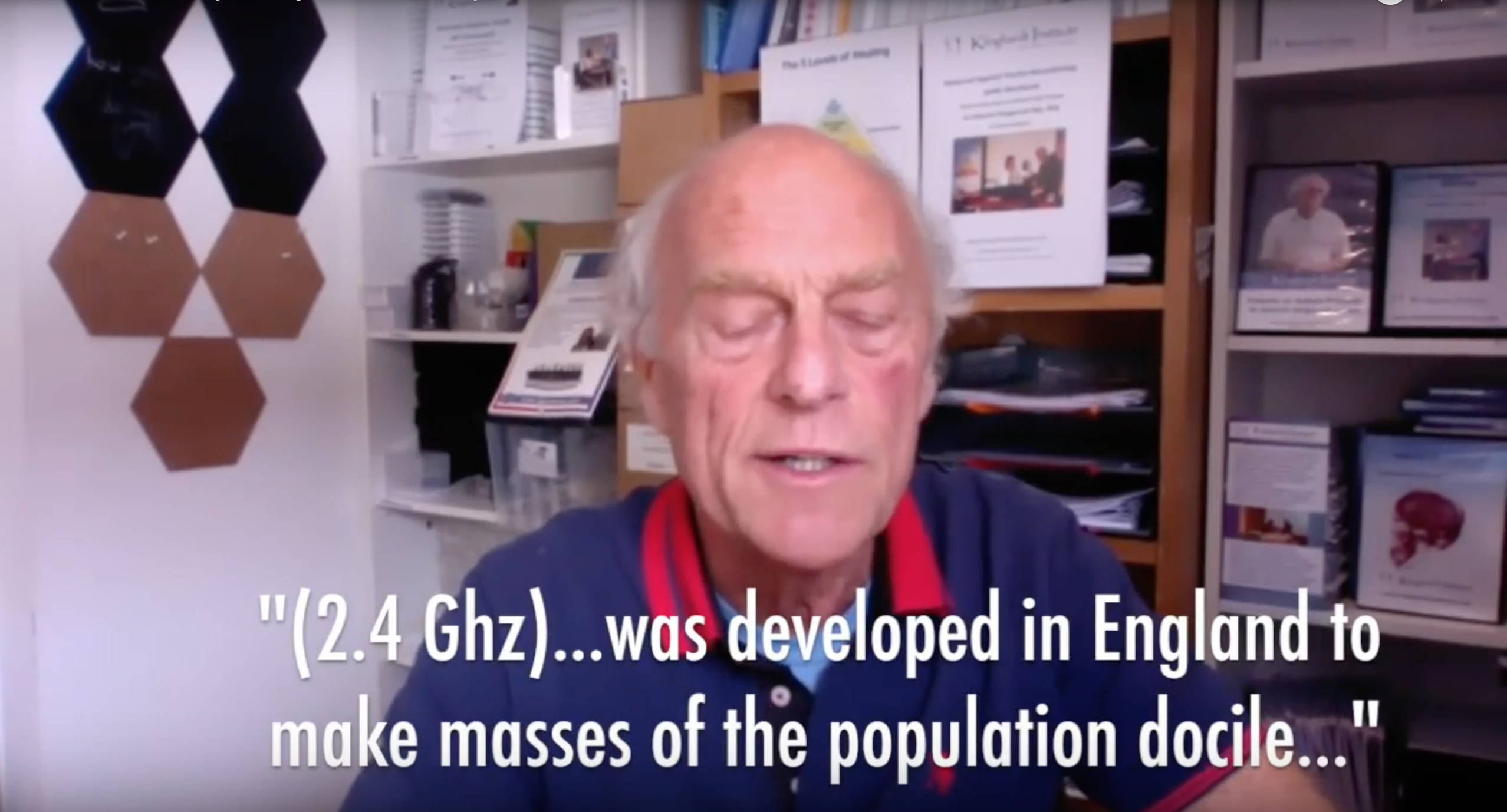 Dear friends – below are a few excerpts from my book, “The Dark Side of Prenatal Ultrasound and the Dangers of Non-Ionizing Radiation – Part 1.” I am releasing this information now because I feel it is urgent for people to know. Please pass this information on to others so that they may know and protect themselves and their children.

Children are literally dropping dead from heart failure inside schools with wifi using the 2.4 GHz frequency.

We found out the school board had installed a wireless internet system powerful enough to run 300 computers at once and they thought it was awesome. There’s only 7 computers in the school using this system…

It’s curious that this would happen twice to children just over 10 years old. There’s only 50,000 students in the entire school district. I did my research to find out if this was normal or abnormal. Turns out the estimate is 1: 1.3 million per childhood cardiac arrests. This was 20 times higher than expected. Far exceeds the level expected environmental influence. It should have been examined. It should have triggered a public health investigation. But it was only 2 kids, not a high number.

Then it happened again. Another Simcoe County school, to a 13-year old who dropped from cardiac arrest in the schoolyard, lucky for him he was revived by a defibrillator after someone called 911. He evacuated to Sick Childrens Hospital in Toronto and had a pacemaker installed on his heart. Then within the year it happened again in another Simcoe County school, to a 16- year old boy. Who was brought back to life by his gym teacher using CPR. Evacuated to Sick Kids and had a defibrillator installed in his heart.

This was 4 kids with cardiac arrest. It brought the observed rate of juvenile cardiac arrest within Simcoe County schools to 40 times the expected. The only response by the Simcoe County School Board has been to install defibrillators in 100% of the students.”

Did you know that 2.4 GHz – the same frequency that we are exposed to with wifi – causes tachycardia?”

Even worse is the fact that malevolence appears to be involved since the wifi radiation that now permeates schools and libraries across the U.S. (and is also being used in wireless baby monitors as well), is being transmitted through the very same 2.4 GHz frequency used in microwave ovens known to cause seizures, chromosomal aberrations, tumors, infertility and much more. Western governments were warned in the 1990s by top Russian scientists about the 2.4 GHz frequency and the damage that might ensue if this frequency was used around pregnant women and children.

“The USSR were the first, as far as I am aware, to warn us about using this frequency for common use. Later, again, top scientists from the USSR and Canada warned us not to introduce the 2450 MHz into schools – fearing harm.”

“A wireless baby monitor at less than 1 meter away from the baby’s crib was roughly equivalent to the microwave radiation experienced from a cell phone tower only 150 meters away.”

“Babies are being put at risk of cancer by hi‑tech cot monitors which emit deadly radiation… Slow-pulsing microwaves blasted out by modern digital equipment may cause leukaemia, say scientists. Lab tests have also linked the radiation to potentially fatal brain tumours, breast cancer, headaches and disturbed behaviour patterns in kids.

Consumer group Powerwatch has urged parents to ditch digital (DECT) monitors… ‘We don’t recommend they are used. Do not put a wireless transmitter in your child’s bedroom and irradiate them unnecessarily.’”

“What they’ve done [the FCC] is… [taken] the most harmful frequencies available – you know, 2.4 GHz – which happens to be the frequency that the water molecules start to rotate on their axis…

Why are they messing with the water molecules? Well, we’re 70% water. And they know what this stuff does. So, what the FCC did is they opened up that frequency band – that part of the spectrum – to everybody… That virtually ensures complete proliferation and saturation of radiofrequency emissions in that part of the spectrum. In other words, they want to bathe you in the frequency that messes with the water molecules… Of the trillions of frequencies, [2.4 GHz] is the spot on the spectrum where the maximum dialelectric loss of water begins.”

“The frequency band that is used for cell phone radiation is the most destructive frequency in the entire spectrum… Baby monitors [that also use the 2.4 GHz frequency] will destroy the baby’s brain early on.”

For those who doubt that western governments would deliberately try to cause harm to children, please consider the following:

“It only became known in the last 10 years that microwaves were used in British orphanages to basically sterilize the orphans… They found out that 2.4 GHz frequency was the ideal frequency to sterilize a population over two or three generations. It induces epigenetic damage to the system that makes them less likely to be fertile. And that is passed on to the offspring who then, again, is blasted with 2.4 GHz and then, over two or three generations, everybody will be sterile…

[2.4 GHz] is the carrier frequency for all cell phone communications and for Bluetooth… It’s a mass attempt to basically sterilize the western world population. Russia and Iran are using different frequencies that are not doing that damage.”

As if all of the above were not enough, the 2.4 GHz frequency is also the frequency that maximizes the absorption of radiation in animal tissues.

“Wifi in schools operates on the same frequency… as that of a microwave oven… about 2.45 gigahertz… and this wavelength is intended to maximize… the absorption of radiation in a hunk of animal and plant tissues that we call food inside a microwave oven…”

“The frequency band that is used for cell phone radiation is the most destructive frequency in the entire spectrum… Baby monitors [that also use the 2.4 GHz frequency] will destroy the baby’s brain early on.”

Hence, our children are knowingly and intentionally being cooked with this radiation and yet, mum’s the word from the medical and telecom industries who are hell bent (literally) on continuing their radiation assault.
…..

To get a sense of what is happening inside the bodies of our children when they are exposed to these microwave frequencies, let’s examine what occurs inside a microwave oven when food is being cooked.

“Nukers’ emit at 2,450 megaHertz (MHz), equivalent to 2.4 gigaHertz (GHz), causing dielectric heating, meaning the water molecules in the food vibrate violently at extremely high frequencies (millions of times per second), creating molecular friction, destroying nutrients and affecting the heart rate and variability of any person that stands near the oven. This is why it’s extremely dangerous to cook meat, because the blood is affected also, like the molecules in the water in food. Structures of those molecules are ripped apart and forcefully deformed. Some people call it ‘electric whiplash.’

In fact, microwaves are used in the field of gene altering to weaken cell membranes and to break cells apart…. Human tissues can experience the same violent deformations as your food that’s nuked.”

“Grigoriev et. Al. (2010) showed that 30 days exposure to unmodulated 2450 MHz microwave radiation triggered a small but significant increase in anti-brain antibodies in the blood of rats… which could then result in an auto immune attack on the brain and/or nervous system. An example of an auto immune disease of the brain is Graves disease in which the pituitary gland (at the base of the brain) is affected.”

Research on radiation in the microwave range (2.4 GHz) found “a highly significant 12.5% increase in chromosome damage to bone marrow and blood.”

The bone marrow of a child’s head absorbs 10 times more radiation  than an adult, while those of infants and toddlers will absorb even more…