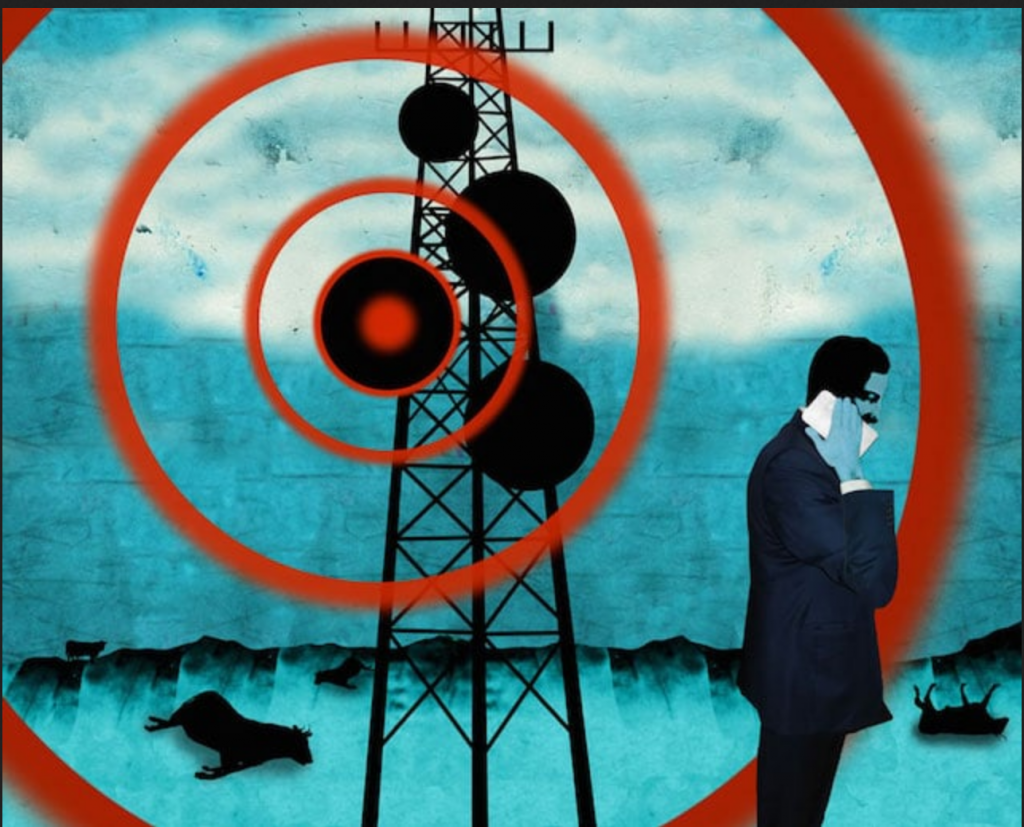 You are all missing a clear and present danger that dwarfs climate change, nuclear war, and all the chemical pollution put together. Seriously.

This is the blanket microwave irradiation of the entire planet.

Dr Robert Becker would undoubtedly have won the Nobel prize for medicine for his discoveries in the use of electromagnetic fields in healing, if he hadn’t drawn attention to the dangers of EM radiation to human health. He very quickly lost all his government contracts and his lab after that, and went and studied law, because he saw it was going to be a vast legal battle to get the authorities to admit the dangers of this radiation.

Not only did he discover that wounds and bone fractures healed more quickly when their natural healing EM signature was amplified. He actually demonstrated that the red blood cells were de-differentiating back to the stem cell state and then re-differentiating as bone cells in order to heal breaks. This has been described by some as the only true healing mechanism ever discovered by medical science. And it has been buried without trace: now we use genetic modification technology to try achieve the same results.

In his last interview in 2000, Dr Robert Becker stated the following, with some interjections from the interviewer:

I have no doubt in my mind that at the present time that the greatest polluting element in the earth’s environment is the proliferation of electromagnetic fields. I consider that to be far greater on a global scale than warming…

…yeah, and the increase in chemical elements in the environment. All of these things are reduced when compared to the proliferating effect of the electromagnetic fields. The only difference is that we don’t know they are there.

Yes, it’s invisible to us. We don’t know that it’s there. So, it has never been a particularly prominent question even among the environmental people. And part of the problem is that our total economy is based on unlimited use of electromagnetic energy.

Next witness: Mr Barrie Trower was the UK government’s top scientist and intelligence agent working in the field of microwave warfare during the 1960s, when — as a radiation scientist and secret operative — he went through several full nuclear war alerts.

In an interview with a medical doctor, Mr Trower described in detail the genetic and molecular damage done to all living beings exposed to pulsed microwave radiation; unlike a nuclear blast, or radiation from the sun, this is modulated with biologically active frequencies across the entire spectrum of physiological processes, very particularly including brainwaves.

The interviewer, Dr Zac Cox: “You are saying it’s not just brain tumours, it’s not just leukaemias, we’re talking about total collapse of our environment, all the ecological system is collapsing…”

I have met and travelled with Mr Barrie Trower for a week in South Africa and Botswana in 2010. He did not say one single thing he could not back up with copious scientific evidence from literally piles of scientific papers, just about the only luggage he brought with him. It was just a tiny fraction of his library and it took us nine hours to photocopy.

If you watch the actual video of this interview, it’s on Youtube somewhere, you will see just how emphatic and immediate Mr Trower’s response is. Again: very few scientists who have ever faced nuclear war will have had more knowledge of its possible radiation effects than Mr Trower, who was the top expert in the whole Western world on the effects of such radiation. When I met him I was surprised to find that his real expertise is in human physiology, rather than wireless technology, as I was expecting.

So here’s my prediction, and let’s see how quickly I’m proved correct: according to then-FCC chairman Tom Wheeler, 5G is to be rolled out across the entire landscape, particularly including rural areas, with commercial applications in action by 2020: “The 5G revolution will touch all corners of our country.”

He says, in the most threatening tone:

“…And stay out of the way of technological development.”

You will see later in the video how a Bloomberg reporter lost his press accreditation for simply being seen talking to an anti-mast activist and had to fight to get it back.

Most significantly, Wheeler says: “We won’t wait for the standards.” These are tiny little details like … health standards. This is your top American regulator speaking, an industry lobbyist turned chief government agent, the fox officially in charge of the hen house. The next FCC chairman, the truly despicable Ajit Pai, is another industry stooge. So much for Trump draining the swamp.

Now: 5G radiation is almost entirely absorbed by the skin. It resonates most strongly with sweat glands. Scanners at these frequencies can tell from a distance exactly when you start perspiring, as you will hear from the scientists at this conference. The skin, the largest organ in the body, has been designated overall as a “limb” for the purposes of 5G, so it can be radiated at higher levels. Your face is now a limb, according to microwave engineers, and your ears have long been designated as an “extremity” by the same experts. May I remind you that your ears are structured holes in your head.

I lobbied the World Health Organization back in 2009, showing them photographic evidence that radiation from broadband masts causes hideous and incapacitating rashes in humans, including infants. We collected affidavits and doctors’ letters from over 50 people in one suburb alone. As with all people who petition the WHO EMF Project, even heads of national radiation protection agencies, I was completely ignored. The level of denial is absolute, literally absolute. The lies told by the WHO are also absolute. They say there is no evidence that masts cause harm, and told researchers in 2006 not to research health around masts. (There has not been one single study on masts and health in the USA: they are very obedient scientists.) I have shown the WHO that every single one of 24 studies done in the world found a consistent pattern of health problems around mobile phone masts, including drastically raised cancer rates. Of course, I am ignored and journalists repeat the WHO lies. If you ever want to read straight fake news, look at WHO and its statements on non-ionising radiation.

My prediction therefore is that starting right now, as 5G is trialled and rolled out without any health testing, you are going to see vast epidemics of skin disorders and rashes, millions of people will start feeling burning sensations on their skin and displaying symptoms that no doctor can diagnose. I’ve seen this all before. If you want to invest in a sure-fire stock, find a company making truly industrial-strength antiperspirants, because these are going to become very “hot” sellers.

You people are talking about global warming: wi-fi universally uses the exact same frequency as microwave ovens, 2.4 GHz. The Motorola lab chief C-K Chou showed years ago that rats exposed to this frequency presented a 300% increase in cancer, which he called a “provocative finding” and then buried, building a lucrative career by lying outright that there is no evidence of harm from this radiation.

Now you are going to bathe the entire environment in radiation that is specifically absorbed by the skin. What is going to make you hotter, in the next two years: global warming or 5G? Do any of you want to argue with me? You can’t even begin. So stay silent, like everyone else in the game. The radiation is invisible, so who cares: you can proliferate the frequencies without limit. The entire “non-ionising” spectrum is now jammed with pulsed radiation.

Now hear one of the world’s greatest experts in this field, Dr Martin Pall, say at 40:30 into this video, after providing copious evidence:

In fact, what seems clear from this, is that there is a strong argument that these microwave frequency EMFs in fact are more dangerous than ionizing radiation to the body. This of course is exactly opposite to what industry has been claiming for many years.

But it doesn’t matter what any experts say. “We won’t wait for the standards.” Of course we won’t, because there is no safe level for this radiation.

Governments are really quite funny in this respect. They deploy whole teams of academics to do fake research showing that mobile phones are safe — King’s College, London, and Imperial College, London, have overt government contracts to do just that. (My teacher training was at King’s, back in 1978, and it crawls with military and intelligence types, it’s well known for this. I have never met human beings I would trust less than those scientists at King’s.) But these same governments will then jump up and down and tell you to panic, panic, panic about global warming.

I’ll grant you: the Yellowstone caldera erupting would be a truly catastrophic event that might wipe out the entire USA, from what I understand. But if it wipes out the massive 5G infrastructure build that Tom Wheeler is adamant must be rolled out without any standards: I still think it would be doing America and the entire world a huge favour in the long run.

I challenge any of you to argue with me. I am not holding my breath.

[Note: this post was originally a comment to this article by Elizabeth King, and is only visible to Medium members, so I am putting it out separately.]