Long-time United Nations staff member Claire Edwards summarizes worldwide developments in the 5G situation. While still far from a victory claim, there is much to be hopeful about as millions around the world deepen involvement and take a stand for our shared future.

How do you stop the rollout of a 12 trillion dollar technology promoted by one of the most profitable industries on the planet and bulldozed through by the EU, FCC and the whole UN, most notably its WiFi enablers, WHO and ITU?

Many people have said it’s impossible. But even as the Trump administration attempts to ram through 5G in the United States, the dominoes are indeed falling around the world, as cities and entire nations are coming to their senses and putting the brakes on 5G. 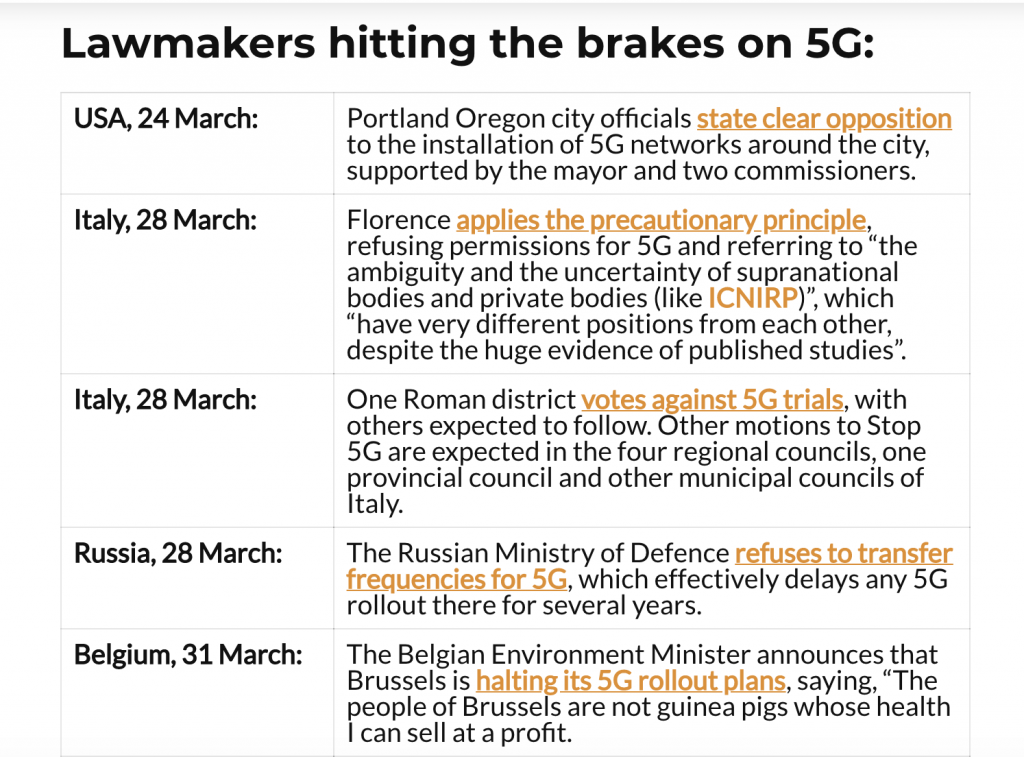 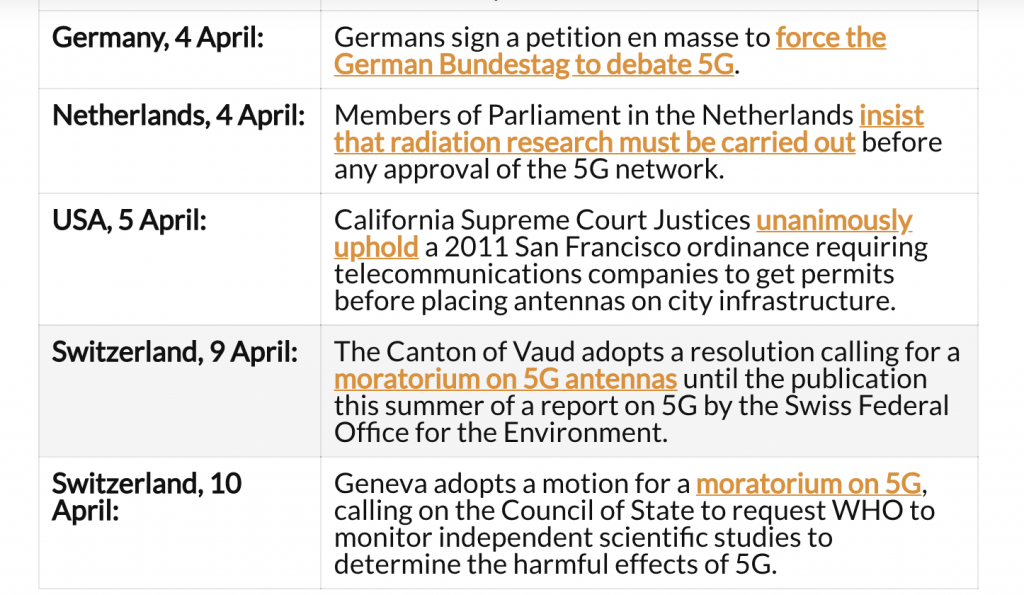 For me, it has always seemed an information problem. If the public simply understood the existential threat posed by adopting a military weapon as a communications technology, they would not accept it.

The challenge of informing people is twofold. The name “5G” is deceptive, implying a simple upgrade from the current 4G or fourth generation wireless. [And many WiFi routers now display “5G” as a mode option, but it means “5GHz” in that context, not actual “5G” — an industry ploy to normalize the term’s acceptance through intentional obfuscation. -Ed.]

This ruse cleverly disguises the reality that 5G means densification, with each individual, visible antenna being replaced by thousands of tiny antennas menacing people, animals and nature from every nook and cranny on Earth and from 20,000 or more satellites with lethal, laser-like beams hitting their unwitting targets millions of times a day like silent bullets.

The second difficulty is the tight control of the media. Hardly a whisper of negativity about 5G penetrates the public sphere, while its claimed benefits are constantly touted in puff pieces in newspapers and in numerous promotional videos.

Yet in the space of only a year since we first heard about the impending catastrophe that is 5G, the message has spread virally through the alternative and social media.

Since US Senator Blumenthal dealt a major blow to the telecommunications industry by definitively establishing that no safety studies have been done, the bad news on 5G just keeps on coming. At least 21 US cities have passed ordinances restricting “small cell” installation, and many are charging “recertification fees” to make it unprofitable for the wireless industry.

And the UK-based microwave weapons expert Barrie Trower reports that 17 mystery countries are taking steps to avoid getting 5G.

While the EU eagerly promotes the rollout of 5G, a new EU report admitsthat 5G is a massive experiment, lamenting that:

“[T]he problem is that currently it is not possible to accurately simulate or measure 5G emissions in the real world … concern is emerging over the possible impact on health and safety arising from potentially much higher exposure to radiofrequency electromagnetic radiation arising from 5G.”

The EU report goes on to set out the dangers:

“Increased exposure may result not only from the use of much higher frequencies in 5G but also from the potential for the aggregation of different signals, their dynamic nature, and the complex interference effects that may result, especially in dense urban areas.”

Meanwhile, a court in France has recognized electrohypersensitivity (EHS) as an occupational disease that can be developed also from exposure to levels of radiation that are considered to be safe by the government.

No one wants 5G but the telcos

5G is beginning to look like an unwanted orphan. Everyone who hears the truth about it shuns it like the plague. Even most of its proponents clearly have no love for it.

In his Palm Beach neighborhood, President Trump and his fellow billionaires are not having any of it. None of the EU institutions in Brussels are having it (European Commission, Council of the European Union, European Council and the European Parliament). And its very enablers, the UN and its WHO and ITU are not going to be having it in Geneva, either.

Watch for moratoria being declared in Washington, D.C., home to the FCC; and Munich, nearby home to ICNIRP. Either would be an obvious indicator that the game is rigged.

Unless this insane 5G satellite plan is stopped, they, too, might wake up to find themselves as much guinea pigs as everyone else in this massive biological experiment.

But one wonders how the 5G movers and shakers will avoid the satellites, which the 5G literature boasts as being intended to “blanket” the Earth. Perhaps the satellite beams will avoid the areas where they live. Or perhaps not. Unless this insane 5G satellite plan is stopped, they, too, might wake up to find themselves as much guinea pigs as the rest of us in this massive biological experiment.

While well over ten thousand peer-reviewed scientific studies on the biological effects of electromagnetic radiation provide a clear perspective on the unprecedented risk of 5G, the rhetoric from the corporate media would have you believe that it’s the greatest thing since sliced bread. One thing we can agree on: if we were to allow 5G to go ahead, it would make history. What a pity, then, that it would leave no one standing to celebrate it.

The tide is turning in our favour because people like you, dear reader, are becoming educated and involved. You are sharing information and speaking with leaders. Thanks to your willingness to stand up for life and love, we will succeed in this great battle of our time.

What’s happening with 5G where you live? Comment below!

There are hundreds of organizations popping up everywhere. Here are several:

2 thoughts on “5G: The Dominoes Are Starting To Fall”