Below are excerpts from several communications about this L.A. victory.

“The dockworkers (in the Teamsters union) are really upset about 5G being set up at the Port of Los Angeles, they don’t want the RF (radiofrequency radiation) exposures nor automation which will do away with jobs. Los Angeles is busily setting up antennas all over the dock areas, and allegedly this is not in their Master Plan. About 500 of them expected to show up at City Hall in Los Angeles.” — Susan Brinchman 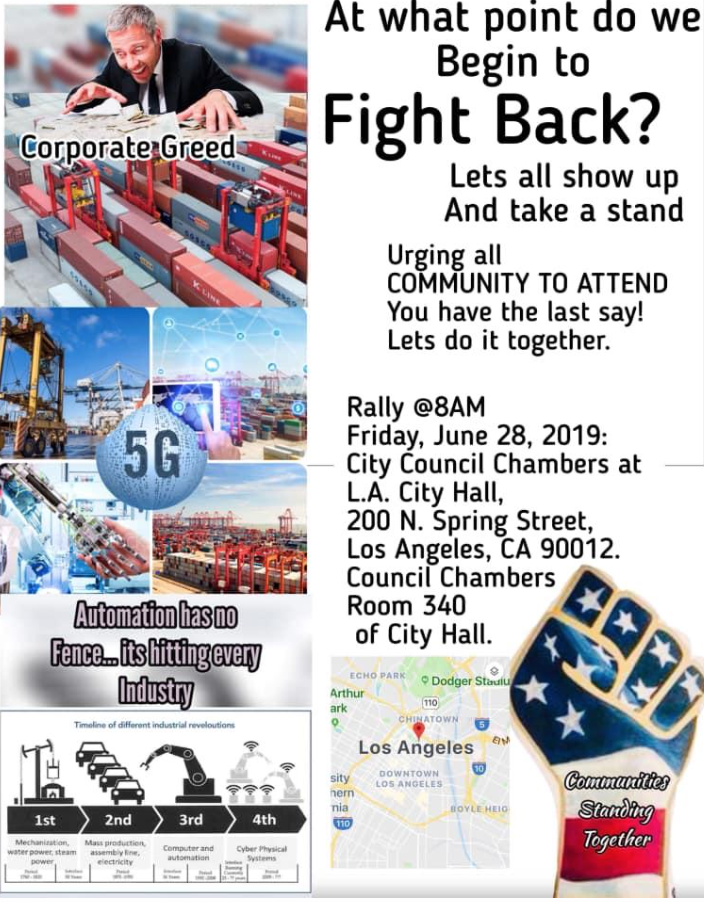 In February, Ericsson and China Unicom announced they are developing a 5G smart port system at the Port of Qingdao in China after completing a technical field trial.

The companies anticipate a reduction of up to 70 percent in labor costs with the 5G automation upgrade. In collaboration with port machinery manufacturer ZPMC, they achieved an automated ship-to-shore crane lift of a container over a 5G connection operated from a control center.

A victory today! 🙂 Looks like the dockworkers got what they wanted today – no automation, a unanimous vote by Los Angeles City Council https://ktla.com/2019/06/28/l-a-city-council-votes-down-automation-at-some-port-of-los-angeles-terminals/. Will learn more what it means re: the 400 antennas they were getting ready to install for 5G at the docks to facilitate automation.– Susan Brinchman

LA City Council sides with longshore union, unanimously sends decision on automation at the Port of Los Angeles back to Harbor Commissioners

LA City Council sides with longshore union, unanimously sends decision on automation at the Port of Los Angeles back to Harbor Commissioners

Longshore workers and their supporters rally at Los Angeles City Hall to save their jobs from automation at the Port of Los Angeles on Friday, June 28, 2019. The city council voted to reject and return the Harbor Commission’s approval of robots at the port saving the union jobs. (Photo by Sarah Reingewirtz, Pasadena Star-News/SCNG)

The Los Angeles City Council has formally taken the longshore union’s side in the ongoing battle over automation at the Port of Los Angeles.

Hundreds of longshore workers jumped to their feet and cheered as the 12 present members of the 15-person panel voted unanimously Friday, June 28, to reject last week’s decision by the Harbor Commission to move ahead with an automation permit at the massive APM Terminal on Pier 400.

In doing so, the City Council sent the permit back to the commission for an analysis of what automation could mean for the economy and local jobs.

“We will not be the next Detroit,” Councilman Joe Buscaino, who led the charge in asking his colleagues to reject the Harbor Commission’s decision, said before the vote, as the audience gave him a standing ovation. “Automation is an important issue that impacts my family, my friends, the people I grew up with in town. And it impacts my constituents.”

But Tom Boyd, an APM Terminals spokesman, rebuked the council’s decision in a written statement.

“We are disappointed by the L.A. City Council, (which) disregarded the actions of the Port of Los Angeles Board of Harbor Commissioners vote,” Boyd said, “and like Councilman Buscaino mentioned, we hope the situation will be resolved in the near future.” 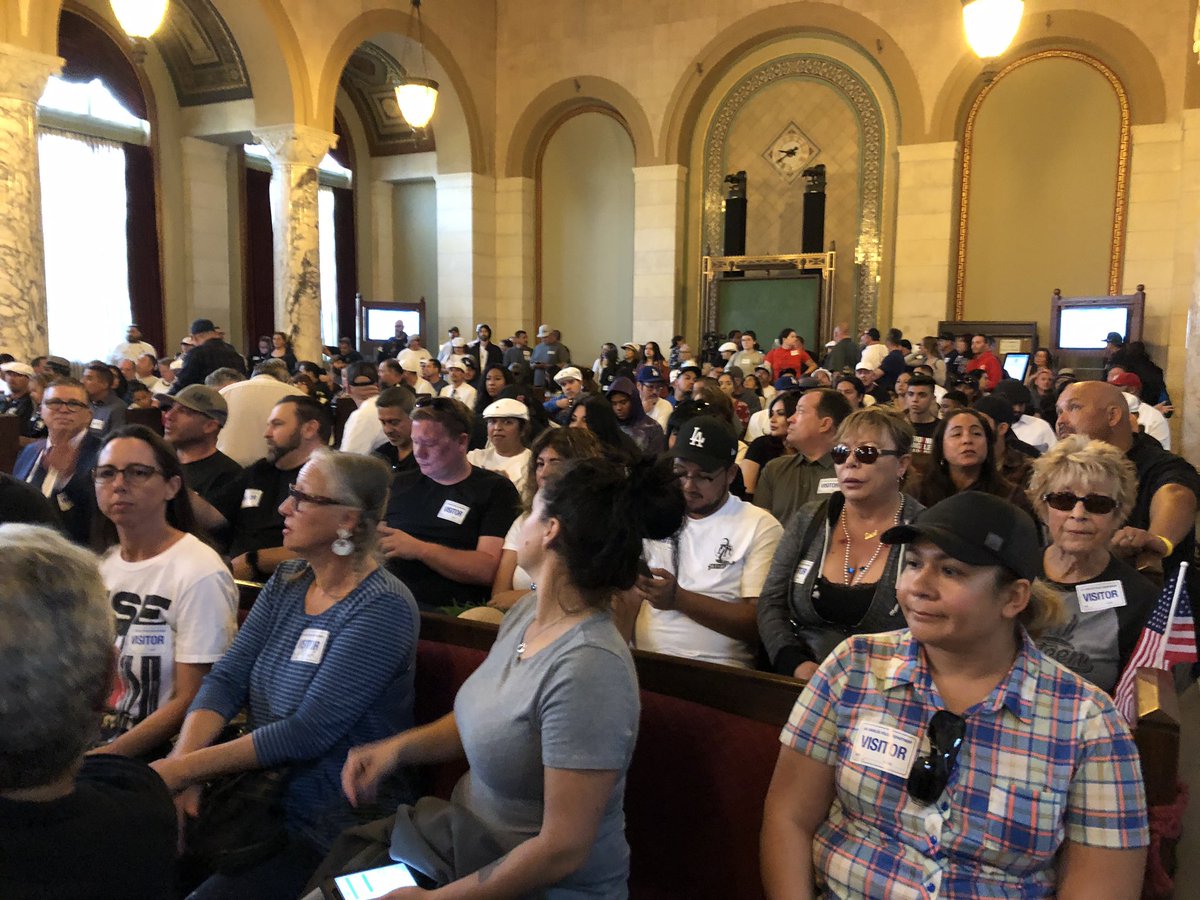 APM Terminals, owned by shipping-container giant Maersk, has sought a permit, considered routine, to make landslide infrastructure changes necessary for operating battery- and electric-powered equipment with zero and near-zero emissions. Doing so would pave the way for automation at L.A.’s largest terminal.

The permit received administrative approval from port staff in January.

But on Feb. 21, the longshore union appealed the decision to the L.A. Board of Harbor Commissioners — triggering a public hearing process that saw thousands of longshore workers and their supporters marching in the streets and filling meeting halls.

While terminal operators have the right to upgrade and automate their businesses — and the labor contract with the International Longshore and Warehouse Union acknowledges and accepts that fact — the efforts to pave the way at APM triggered massive protests.

Thousands of longshore workers and their supporters marched in the streets and filled meeting halls in recent months, arguing that automation would kill jobs.

The harbor commissioners delayed voting on the permit in April at the request of Los Angeles Mayor Eric Garcetti, who asked for time to allow his office to mediate between both sides.

Then, last week, the commissioners finally voted — 3 to 2 — to deny the longshore appeal and grant the permit.

Buscaino immediately vowed to take it before his council colleagues.

APM Terminals, for its part, hit back, penning a letter that said if it can’t get the permit, it would move ahead with diesel-fueled — rather than zero- or near-zero emission — automation.

Still, the talks between the two sides continued, as they tried to strike a deal on mitigation or concessions that would ensure more job stability should automation move forward.

The closed-door meetings ran until 10:30 p.m. Thursday, June 27, with no resolution announced.

That set the stage for Friday morning.

A large portion of the standing-room-only crowd — about 350 people — arrived in six buses carrying members of the longshore union.

About 25 people spoke during public comment, all siding with the union.

Outside City Hall, about 200 protesters, some of whom also arrived on the buses, called on the council to oppose the move toward automation.

The panel obliged. Council President Herb Wesson said he supported the union because he was elected to serve people, not business.

“It is important that we do the job that people hired us to do,” he said. “People at times may not believe this, but we are in the people business. That is our job. So I think that I can say without any hesitation or pause that — ILWU and Mr. Buscaino — we got you.”

The enthused crowd frequently broke into cheers and applause as council members spoke in favor of putting people above “robots.”

“The choice for us is simple,” said Councilman Gil Cedillo. “It’s a question of jobs or automation, workers or robots.

“Our duty,” he added, “is to look at the bigger picture.”

Councilman Paul Koretz, another union backer, framed the issue as a battle over the future.

“We have to take a stand and this fight begins today,” he said. “I’m 100% behind you, all the way. This is a fight for our future and we’re not going to take this lying down.”

Los Angeles Harbor Commissioner Diane Middleton, who along with Commissioner Anthony Pirozzi voted to uphold the union’s appeal, also drew shouts of support as she told councilmembers that the APM Terminal plan did not comply with the port’s master plan.

“This land is public land,” she said.

After the unanimous vote in favor of the union, the audience jumped to their feet — with many shouting “Thank you!”

But that won’t end the fierce battle on the issue: Terminal operators say automation will lead to increased efficiency in an increasingly competitive trade market; the ILWU, meanwhile, has fought to preserve the well-paying jobs it says union members stand to lose through automation.

Some of the harbor commissioners, for their part, say the law — should the battle end up in court — is on APM Terminals’ side.

Still, after the vote, union members and supporters gathered outside on City Hall’s south lawn.

Buscaino and Councilman Mike Bonin, the co-sponsor of the motion to take jurisdiction over the commission vote, spoke to the crowd — whose chants reverberated through the hallways of City Hall.

Buscaino said he remains hopeful the terminal operators and union leadership, in the talks that are expected to continue, can reach an agreement.

But he also said the issue doesn’t impact longshore workers alone. He called for a blue ribbon committee to study the issue of automation in general, noting that technology and the use of robots also impact airport and grocery store workers, and “any repetitive job” people hold today.

From the port’s perspective, however, automation is a key to remaining competitive, with Seroka telling commissioners in March that the project sought by APM would modernize the terminal.

But the process also has high start-up costs for terminal operators and there are studies that show the automated equipment is not necessarily more efficient at moving and handling cargo than dockworker-staffed terminals are.

The murkiness over the benefits of automation underscores one of the few points on which both sides seem to agree: Friday was just the latest battle in a saga that will likely drag on.