As technology rolls forth our society is gleaming with excitement each time every new gadget comes out faster and more vibrant than the model before. But is everything about faster and more powerful technology a good thing? Most people have no idea how dangerous things like having a 5 GHz WiFi router in your home can be.

5 GHz WiFi routers are more dangerous because they are twice the frequency with more intensity than the standard 2.45 GHz models. In the Radio Frequency (RF) Radiation world, the higher the frequency the more dangerous it is to us. 2.45 GHz is the same frequency your microwave oven uses to cook food. The amps used are different but it is the same frequency. The World Health Organization has classified this RF Radiation as a possible “carcinogen“, meaning “cancer causing”. It can split DNA strands within cells. And cancer rates are around 3 times higher in people with high exposure to this RF Radiation. As the new fifth generation (5G) rolls out, it will only get worse. They will operate at between 24 GHz to 90 GHz frequency.

When I did this test I placed my meter about 4 feet away, just so I wasn’t right next to the router. The radiation coming out of my Netgear 5 GHz WiFi router pegged the meter, meaning there was more radiation coming out of the WiFi router than my meter would measure. So in other words it was at least twice the US safety limit. I video taped this test and so here is the video showing me doing this test. The video is short, but telling. Seeing is believing. I highly recommend you take a minute and watch the test I do in the below video.

More Dangerous Than A Cell Phone?

A WiFi router on the other hand is always sending out the radiation 24 hours a day 7 days a week full blast. (A cordless phone sends out radiation 24/7 also just like a WiFi router by the way) It is not intermittent. And it is sending it all throughout the home. There is no safe place to be where the WiFi is not there. A cell phone causes people to get brain tumors when they are on it a lot. There have been scientific studies showing that. (See The 7 Worst Radiations In The Home).

Best Way To Beat The Radiation And Still Have Internet

By far the very best way to beat the radiation problem and still have internet is to hard wire your home and office with internet so you can plug your computers into the wall to get your internet. There is no danger that way. People building a new home can do this for very little extra cost, and it is very convenient.

If you have an existing home it can still be more affordable than you think because most homes don’t need internet in every single room. I have seen people who have done all of this wiring on the outside of their houses. They just run the internet cables right along the edges of their siding to the outside of each room that needed the internet, and then into that room through a tiny hole in the wall. It was hardly noticeable on the outside of the house. In fact it was such a nice job most people would not even notice it at all unless you pointed it out to them. It definitely did not detract from the beauty of the home.

I have seen other homes where they did the wiring inside that looked really nice as well. In the one I am thinking of there were a few rooms where it was not that difficult to run the wiring actually in the wall without doing a lot of damage. But to a few of the rooms they had to run it along the floor under the trim and through tiny holes in the walls in a few places. It can be done so that it looks very professional in most situations.

The most expensive way is tearing out drywall and running it in the walls throughout the rooms in the house where you need it. This way insures the most professional and aesthetically pleasing finish, but is the most expensive.

If You Have To Have WiFi

In some situations you just have to have WiFi and it is not practical to hard wire everything. For example in my home my son is a college student and he really wants to have WiFi to do his homework on his laptop. I suppose I could be more stubborn about it but I found an alternative that I think is almost as good as hard-wiring the internet everywhere. It is called the WiFi Router Guard. In the above short video I test the radiation on my Netgear WiFi router both with and without being in the router guard so that you can see the difference.

If you wish to purchase a WiFi Router Guard here if you go to the “Recommended Protections” page on this website, I have a link to the very best place to get one. They are not very expensive at all and very much worth it. I highly recommend getting a WiFi Router Guard.

Will My WiFi Still Work Using A WiFi Router Guard? 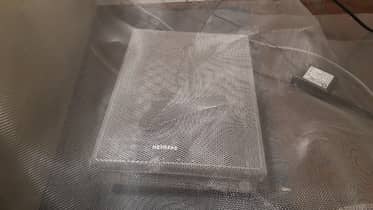 Yes it will. Since I study this a lot I am a bit more paranoid than most. Not only do I have my 5 GHz Netgear router in a WiFi Router Guard, I have it wrapped in aluminum window screen as well. (See picture to the left) I picked the screen up at the hardware store. As you can see in the picture I put my router in the router guard, and then wrapped the router guard with the aluminum screen.

I only did this because my desk is in the same room as the WiFi router and I don’t want to be radiated all day. If I worked in a different room I would not bother doing this.

It is amazing with the WiFi Router Guard and the aluminum screen from 3 feet away my meter only reads at between 60 to 100 micro watts per meter squared. This is something like a 97% to 98% reduction in the radiation. As you can see I have it sitting on the floor and I have a metal file cabinet between myself and the router guard.

If you look close you can see the file cabinet to the left of the router guard in the picture. My desk is on the other side of the file cabinet. From where I sit in my desk my meter reads less than 10 micro watts per meter squared! Perfect is about 3 micro watts per meter squared (3 to 6 should be everyone’s goal to get their house down to) so my office is almost perfect.

So How Does The WiFi Work With This Setup?

There is one other exception to this. Some times when I am using my laptop clear at the opposite end of the house (the farthest point away from the router) my internet will slow down (usually I am watching news with my wife in the evening on my laptop because my son and his friends are using all of the televisions) and so I will actually remove the aluminum screen and open the WiFi Router Guard because the reception will be a bit weak. We plan on building a new home in a little over a year, so I haven’t wanted to spend the money to hard wire internet to that part of the house. If I was going to stay here I would.

But my point is this. The WiFi Router Guard gives you the ability to have WiFi and still stay with in much safer radiation ranges, and it gives you the ability to control when you are exposed to more radiation, and when you are not. I think it is wonderful. In our new home we plan on hard wiring the whole house. We won’t have any kinds at home any longer so I will just keep the WiFi turned off on the router unless I have my kids over visiting and they request it for their laptops.

The Aesthetics of the Aluminum Screen

Now I must say having the Aluminum Screen is not aesthetically pleasing. My wife thinks it looks tacky, and it does. Again I would not do it if it were not that I sit so close to the router. The WiFi Router Guard looks very professional and fits into the office very well. The aluminum screen only cut out an additional 3% to 6 % of the radiation down. So I really would be fine with just the router guard.

The reason I bring this up is because I know some people have told me that with it only trimming off 3% to 6% its not worth the Aesthetics loss. If my desk was in a different room and so farther away from the router, or if I had people visiting my office a lot, I may opt to not go with the Aluminum screen, because the WiFi Router Guard cuts down at least 90% to 95% (closer to 95%) of the radiation anyway.

See the below video to learn more about how and why the new 5G technology coming out is going to be so much more dangerous. One thing that makes 5G more dangerous is because of the shorter length of millimeter waves (MMV). They are dramatically shorter in length than 2G, 3G or 4G wave length. And they are much more dense. How this affects people exposed to this radiation coming from something in the home such as a 5G WiFi router, is it is a much more intense radiation. This means that the carcinogenic effects of 2G, 3G and 4G radiation will be magnified under 5G and deterioration and degradation into disease will happen faster.In the 5G radiation that is blasted out from cell towers, this shorter wave length means that the radiation will not travel as far as the longer waves of the 3G and 4G radiation. This means that for everyone to have good signals everywhere they have good signals now, we will need many more smaller 5G cell towers. Experts say that they need to install a mini 5G cell tower every 2 to 8 houses.

What this means is that we will still have the large towers, plus we will have hundreds of smaller mini 5G towers all around us and we will be surrounded by and drenched in this 5G radiation once it is fully implemented. Plus most people will have 5G cell phones, blue tooth devices in their cars and earbuds, and in their home WiFi and other home electronics. Our cells will literally be bombarded with this radiation from multiple sources no matter where we are 24 hours a day 7 days a week.

Hopefully we will be able to alert enough people to the dangers of this much ultra high frequency and ultra intense radiation waves before it gets to that point. I am not trying to sound like an alarmist, but the peer reviewed studies proving the dangers of electromagnetic radiation are out their by the thousands and we have had this information as a society for over 50 years.

Please also see our articles entitled “What Is A Safe Distance From A Wifi Router?” and “Wifi Router Guard Product Review“.