The United States has virtually no safety standards with respect to human exposure to radiofrequency and/or microwave radiation. Just look at the graphs below to see how ABSURD these “safety” standards are and then watch the short video by Josh del Sol to get a strong visual on how clearly we in the U.S., U.K., Canada and Australia are being deliberately harmed. 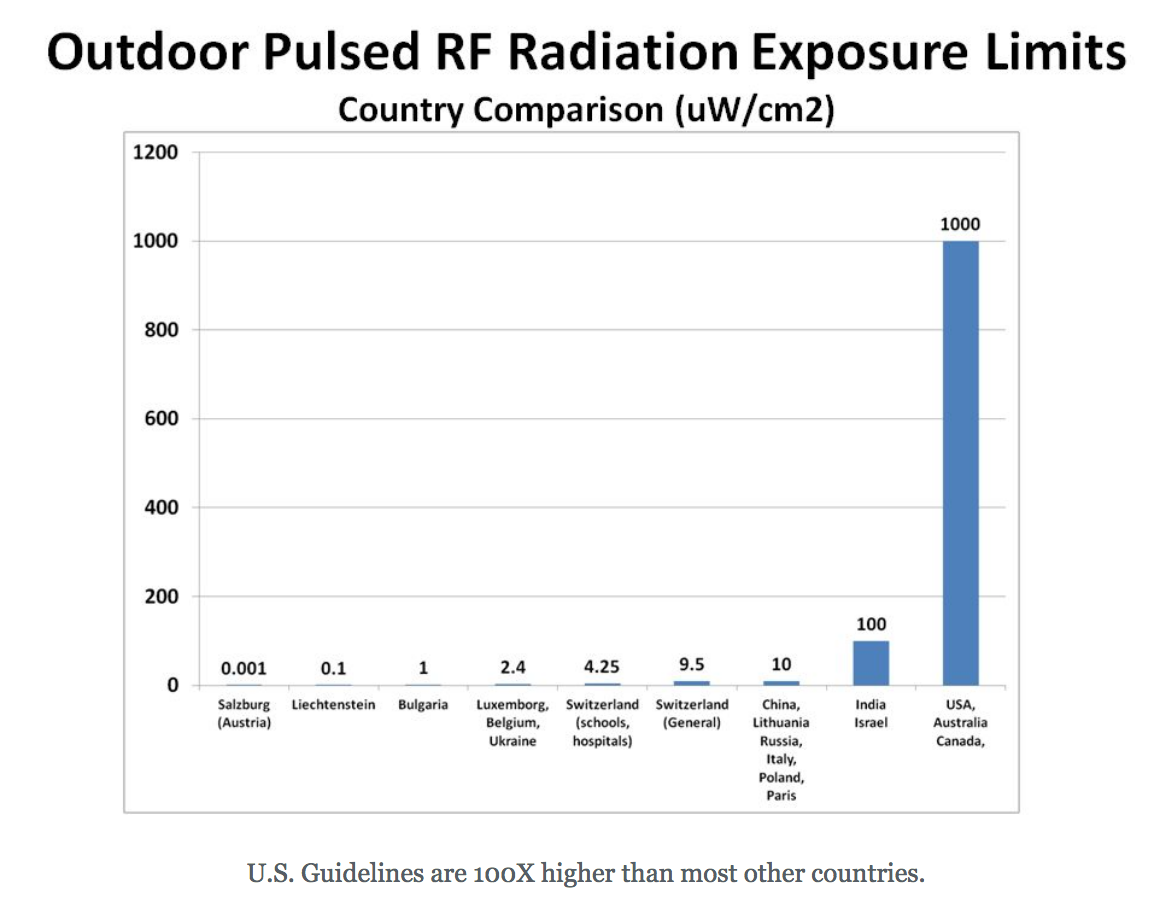 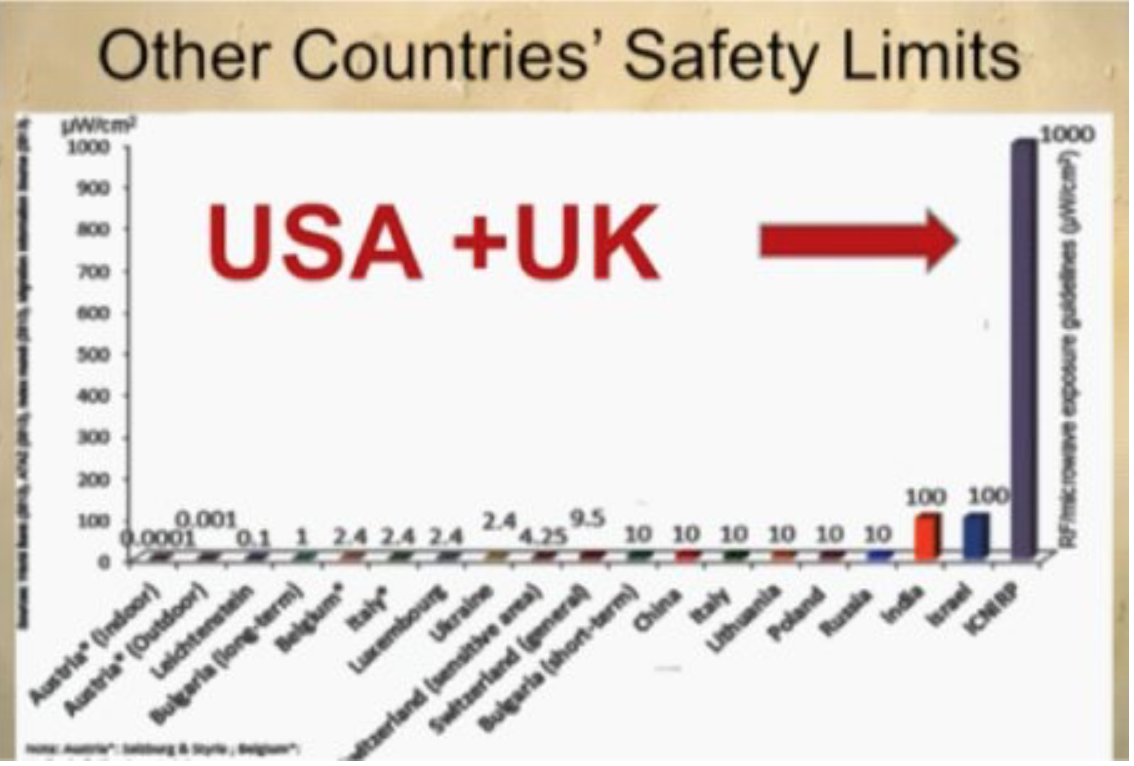 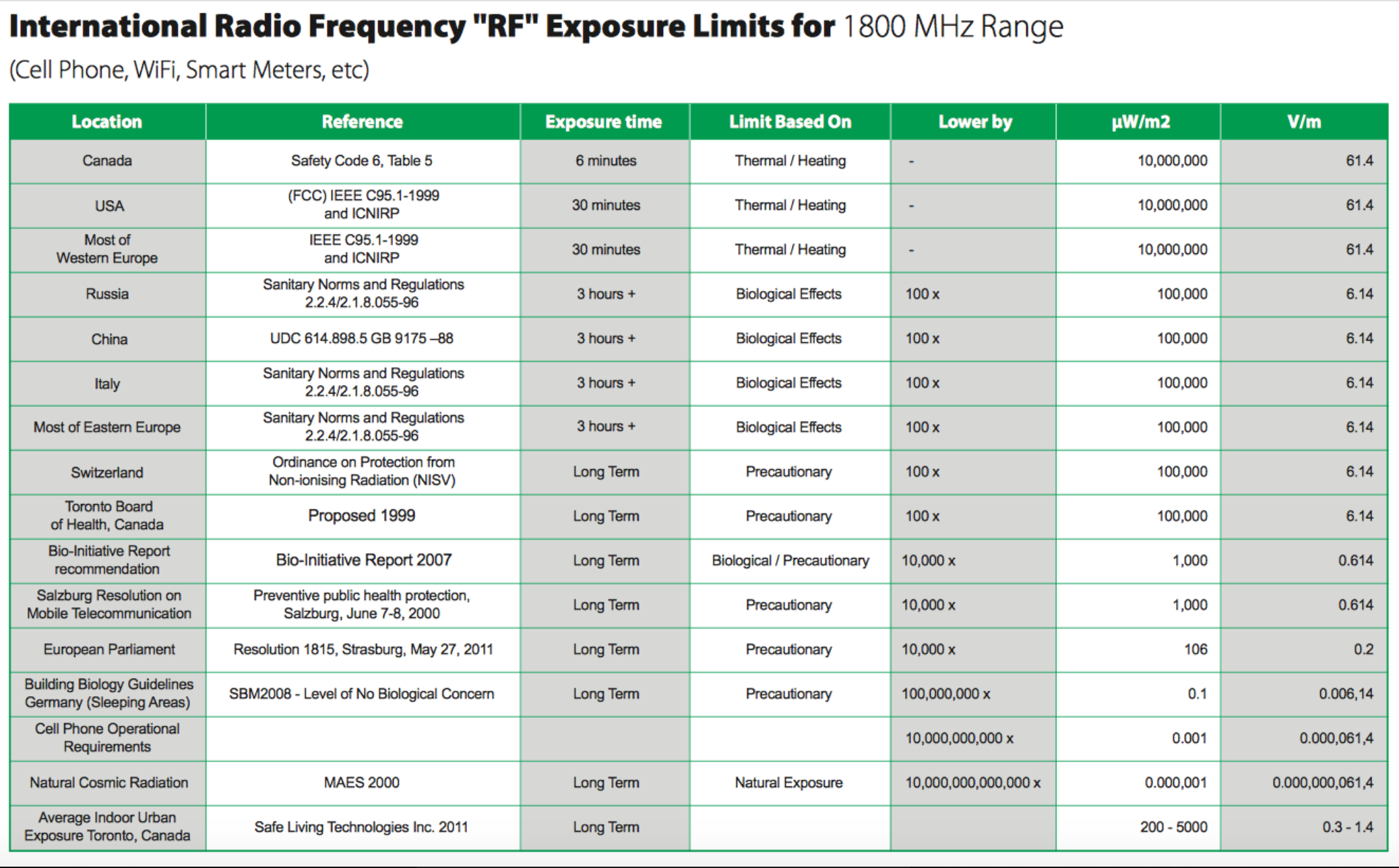 Please watch this short video to get a clear idea of how serious this is.

Another article asserts that Iphone radiation has been documented to exceed U.S. “safety” standards by as much as 500%.

Recent testing of the defendants’ products shows that the potential exposure for an owner carrying the phone in a pants or shirt pocket was over the exposure limit, sometimes far exceeding it—in some instances by 500%.
Source

And yet another article shares some of the biological damage that occurs from exposure to microwave radiation EVEN WHEN IT IS WELL WITHIN THE FCC’s BOGUS ‘SAFETY STANDARDS.”

Already a class action lawsuit has been filed against Apple and Samsung and things are just getting started.

Based on the following graph, let us consider that, if cell phones are emitting such high levels of noxious radiation, then what do we suppose is being emitted by baby monitors? 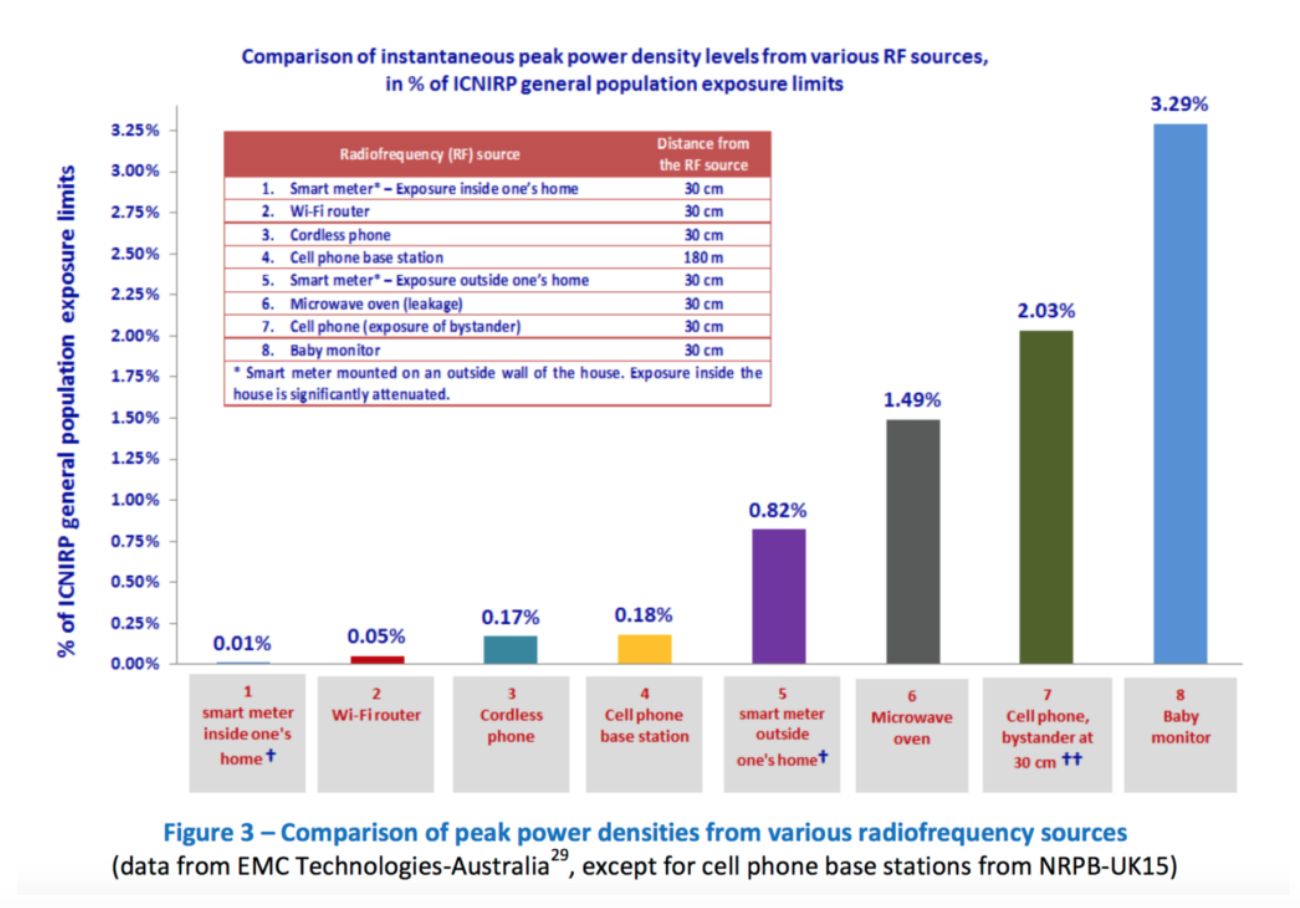 Dr. Dietrich Klinghardt has stated that “baby monitors will destroy the baby’s brain early on.”  Source

A quick 15-minute presentation I recently gave for Wired Schools explains more about what this radiation is doing to children’s brains.

Below are excerpts from my book that reveal more.

From “The Dark Side of Prenatal Ultrasound and the Dangers of Non-Ionizing Radiation.”

“[Moscow researchers] exposed developing frog embryos and tadpoles to an ordinary personal computer. The resulting frogs had severe malformations that included anencephaly (absence of a brain), absence of a heart, absence of limbs, tail necrosis, and other deformities that were ‘incompatible with survival’.” [1]

“Exposing adult flies to the antenna of a working cell phone for just six minutes a day for five consecutive days reduced the number of eggs they laid by 50 to 60%. When the insects were exposed for only two days, i.e., a total of twelve minutes of radiation, the number of eggs was reduced by an average of 42%. Even flies that were exposed for only one minutes a day for five days produced 36% fewer offspring than their unexposed cousins. Regardless of whether just male flies, just female flies, or both were exposed, the number of offspring was greatly reduced. Such rapid sterilization was an effect scientists were used to seeing from X-rays, not from an ordinary cell phone.”[3] [emphasis added]

“Male rats exposed to cell-phone radiation developed cancer at a substantially higher rate, though the same effect was not seen in female rats. Rats exposed to radiation also had lower birth rates, higher infant mortality, and more heart problems than those in the control group. The cancer effect occurred in only a small percentage of the rats, but that small percentage could translate into a massive amount of human cancers.[4] [emphasis added}

“We radiated hen eggs in an incubator with microwaves measuring below [German] limit values, and every embryo was killed! Not a single chick hatched; not one survived the radiation. Healthy chicks hatched from the non-radiated control group, without exception… We have a dove breeder in our association who detected an electrosmog pollution of 1.4 volts per metre (V/m) in his dovecote. The breeding period there has dropped by half. The young birds are no longer fed by the parents, and starve to death; there is also a greater incidence of deformity. Similar reports are coming in about kestrels and swallows. For swallows, the problem is the lack of midges and insects in the air. Since swallows can only catch their food during flight, there’s just not much out there to catch because midges drop dead to the ground at 0.2 V/m.”[6]

“Ferdinand Ruzicka… ‘observed a pronounced restless-ness’ in his bee colonies… after telecommunications antennas appeared in a field near his hives… ‘I am a frame-hive beekeeper,’ he wrote. ‘The bees now build their honeycombs not in the manner prescribed by the frames, but in a helter skelter fashion. In the summer, the colonies collapsed without any obvious cause. In the winter, despite snow and below zero temperatures, the bees would fly out and freeze to death next to the hive’… On the small island lying off England’s southern coast where Marconi sent the world’s first long-distance radio transmission in 1901, the bees began to vanish. By 1906, the island, then host to the greatest density of radio transmissions in the world, was almost empty of bees. Thousands, unable to fly, were found crawling and dying on the ground outside their hives.” [7]

Clearly, we are contributing to our own demise by using wireless devices.   Isn’t it time we started to rethink what we are participating in?  If we don’t get on this issue now, our children do not stand a chance. According to the Tribune, which commissioned the testing at an accredited lab, the iPhone 7 measured double over the legal safety limit, with some data showing more than double what Apple reported to federal regulators.

Apple’s iPhone wasn’t the only device that exceeded safe radiofrequency radiation limits, according to the Tribune. Samsung’s Galaxy S8, when tested at 2 millimeters from the simulated body, also exceeded safe limits. Samsung responded to the Tribune’s report by saying its devices comply with Federal Communication Commission (FCC) regulations.

[6] Too Much Mobile Ringing Will Soon Mean Birds No Longer Singing, Facts are Facts, No. 11: 20, https://www.facts-are-facts.com/article/too-much-mobile-ringing-will-soon-mean-birds-no-longer-singing