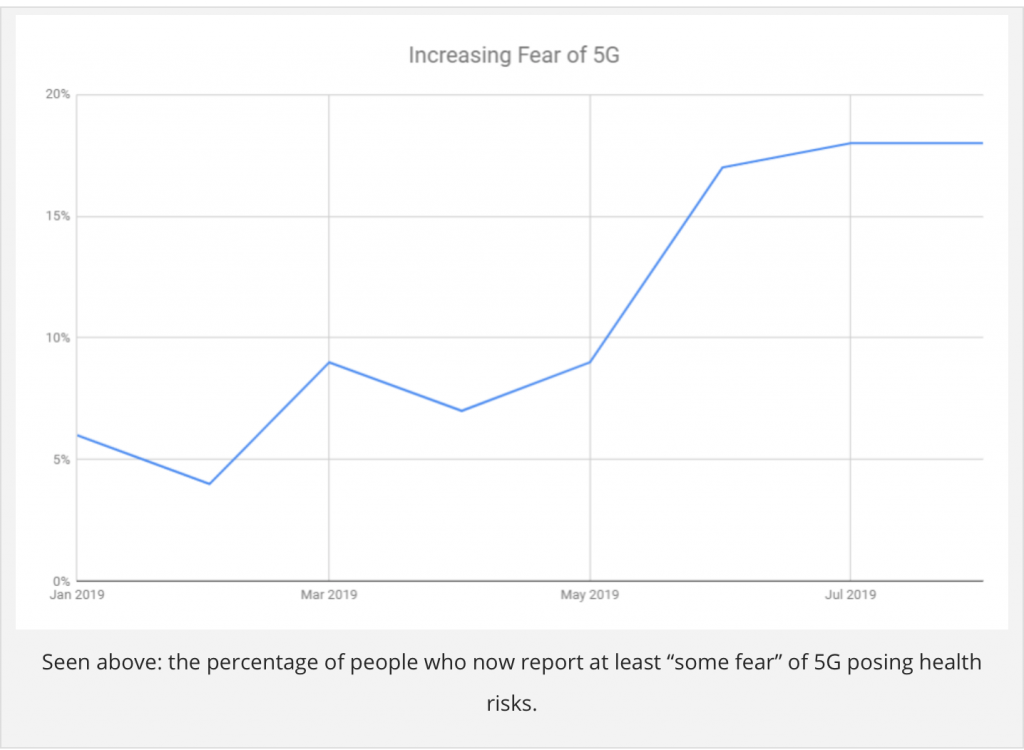 There is no safe level of exposure to radiofrequency radiation, whether it is in the radio, microwave, or millimeter range. ALL OF IT is extremely dangerous and EVERY EXPOSURE causes biological harm. The article below promotes lies and says that higher frequencies are safer. WHAT A LOAD OF HORSESHIT!!!!! Don’t believe that for a minute.

At least the public is beginning to catch on. Too bad the media (including the author of this article) continue to downplay the dangers. WIFI is extremely dangerous and harmful, despite what the media say. Children should never be around it. And frankly, neither should we. All living things are in danger from this wicked technology. It’s time to wake up!!!! IF YOU WANT TO PRESERVE YOUR BLOODLINE, GET OFF THE WIRELESS DEVICES NOW.

Tracking along with the development and deployment of 5G, we have noticed an interesting public opinion trend in our survey data over the past six months.

The sentiment toward nationwide 5G roll-out is turning negative, with more people than ever citing fear of health concerns as the main contributing factor. Initial excitement over the past year is now declining, and the fear of health risk is rapidly growing.

When tracking consumer sentiment of 5G over the past year, there was a spike in fear of 5G in the middle of 2019. We ran crawlers over trending news about 5G and can correlate this with an increase in mid-year media attention about the potential health risks. Despite the fact that the majority of the news coverage was neutral if not positive and reassuring, there was still a notable spike in people responding that they were now at least somewhat worried about the health risks of the new technology.

Shown in the below chart, the spike in fear of 5G health risks

Seen above: the percentage of people who now report at least “some fear” of 5G posing health risks.

This is not a new issue, though. Fear of any new technology, especially that which is misunderstood by the general population, is ripe for misinformation.

When WiFi was first marketed as a new technology, people were nervous about the potential health risks to increased exposure to radioactivity. A famous story of one scientist reporting that WiFi exposed people to risky electromagnetic waves has lingered for the past two decades.

While most people are now less concerned with WiFi, the concept of faster, more accessible internet access somehow posing more risks has reentered the conversation. While most studies have remained somewhat inconclusive about any potential health risks, most researchers do not seem terribly worried.

Quoted from the New York Times article above: “According to experts on the biological effects of electromagnetic radiation, radio waves become safer at higher frequencies, not more dangerous.”

But a quick Google search of “5G health risks” and searchers are presented with whatever information they want to believe. Sites claiming that 5G poses no risk at all, sites that claim 5G will cause DNA mutations, cancer, and worse are mixed together in search results.