The information below was prepared by
Captain Jerry Flynn, BC, Canada 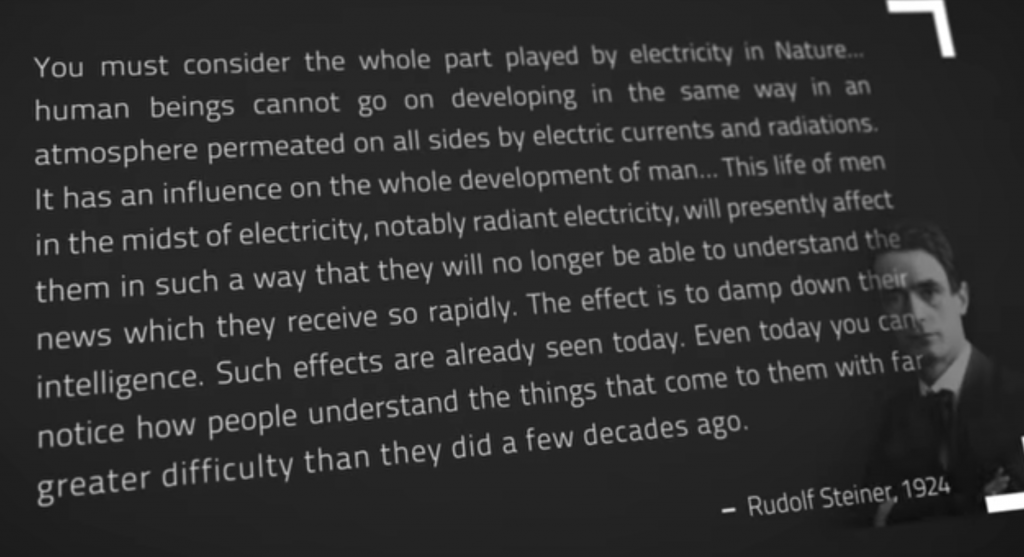 Although this paper is applicable to most countries of the world, its focus here is on Canada and this country’s standard utility, mains or power line alternating current (A/C) frequency of 60 Hz – on which all wireless radio products and other electronics are dependent. The purpose of this paper is to raise people’s awareness that there is irrefutable scientific evidence showing that 60 Hz causes illness and premature deaths in humans because it disrupts and damages Mother Nature’s own brainwave frequencies found in every person’s central nervous system (i.e., their brain and spinal cord) which allows people to function as healthy, living, thinking bio-electrical beings. https://en.wikipedia.org/wiki/Central_nervous_system

1n 1891, Westinghouse engineers, not Nicola Tesla, selected 60 Hz as the frequency for A/C power distribution. Tesla quit working for Westinghouse, in part, because of his disagreement with them over the company’s decision to use 60 Hz. https://www.quora.com/How-did-Nikola-Tesla-arrive-at-60Hz-for-AC-power

In the late 1890s, the Second Industrial Revolution, also known as the Technological Revolution, of which electric motors were the heart, was in full swing across Canada and demand for A/C electricity was high in all regions of the country. Consequently, from a purely business perspective, it became imperative for early investors in this nascent industry to transport A/C electricity as cost-effectively as possible across the nation, which proved to be at a frequency of 60 Hz at 110 Volts A/C. This was strictly an engineering and economics decision, one based on man’s engineering knowledge at that time, when Industry, governments and health officials all knew nothing of human brainwaves and could not know that this revolutionary new and universally welcome technology brought with it invisible, silent, odorless and tasteless health hazards, especially to those who were most exposed to it. https://www.allaboutcircuits.com/news/why-is-the-us-standard-60-hz/
Health and Welfare Canada was established in 1944, becoming Health Canada in 1993. They and all provincial and territorial governments have consistently failed to protect the safety and health of Canadians from the hazards of non-ionizing radiation, specifically, the harmful health effects of non-thermal electro-magnetic field (EMF) radiation that is emitted by anything in which alternating current is flowing. These hazards were discovered by the Soviet Union and its Eastern European allies, but were – and still are – ignored/denied by Western governments. Evidence of this can be seen in Health Canada’s globally-reviled Safety Code 6 (which shamefully has been adopted by all 13 jurisdictions in Canada), which does not even mention power line frequency (60 Hz) EMF radiation, even though Health Canada continues to endorse magnetic fields of up to 2,000 mG (milliGauss) for the Public and 10,000 mG for Workers! By comparison, non-industry scientists say that magnetic fields in homes, schools, etc. should not exceed even one (1) mG. Such is the influence of the electric power generation industry.

In democratic countries, one presumes that governments ensure that all technologies, especially those that emit radiation and are used continuously by, on and/or around, the public, are first independently tested and proven to be safe – by qualified experts having no ties to industry – before they are allowed to be used in society. In matters concerning non-thermal EMF radiation, Canadian federal and provincial governments have consistently failed to do this! The most glaring example of this was Canada’s electric power generation industry’s unilateral decision to adopt the North American standard frequency of 60 Hz electricity as the frequency to be used to provide A/C electricity to people across Canada. Epidemiological studies have shown that those who lived in New York or most other cities in the country at the turn of the century, had a life expectancy in the low-50s; whereas, If you were Amish and didn’t use electricity or if you lived in rural Mississippi or rural New York State, your longevity was in the 70s.” https://articles.mercola.com/sites/articles/archive/2017/05/28/dirty-electricity.aspx

Humans and All Living Things are Bioelectrical Beings
Nature has provided each person and all living things with an exquisitely delicate, extremely minute electrical system, as is evidenced below:

Since the mid-1920s scientists have known that the human brain comprises billions of cells called neurons which communicate with each other via the following electrical brainwaves:

Disease Epidemics (Partial List) Caused By or Linked to 60 Hz Electricity
Any responsible, competent government would be greatly concerned and take timely action to find out the cause of any disease epidemic, especially those that strain health care budgets in all jurisdictions in Canada. But not Health Canada! As an absolute minimum, a responsible government would have invoked the Precautionary Principle in 2002 on hearing that IARC (International Agency for Research on Cancer) had classified EMF radiation a Class 2B or “Possible” carcinogen. Again, Health Canada did nothing! Nor did any Canadian province. Instead of putting the onus on Industry to prove that 60 Hz is safe to people, Health Canada puts the onus on the public to prove conclusively that 60 Hz is NOT safe! Here are some frightening, incontrovertible facts, all of which point to the corruption in Canada’s federal and provincial governments and the electric power generation industry:

Since 1999, Lloyd’s of London has refused to insure anything that emits EMF radiation and has since been joined by Swiss Re. https://www.jrseco.com/insurer-swiss-re-electromagnetic-radiation-highest-risk-category/

It boggles the mind that today, even though we all know – or know of – someone who has died or currently suffers from some form of cancer, Alzheimer’s, autism, Parkinson’s, etc. mainstream news media, governments, industry and cancer agencies virtually never mention power line 50 Hz/60 Hz EMF radiation as being even a ‘possible’ cause of these terrible, heart-wrenching diseases and premature deaths. Even though scientists have known of the dangers of power line frequency EMFs for decades and have repeatedly warned all world governments, most have done nothing. Tragically for mankind, this highlights the power and influence of the self-regulated and profit-focused electric power generation industry compared to governments, which can change every few years and whose members generally are technologically-ignorant and whose ministers can also change frequently. The victims, sadly, are Canada’s entire unsuspecting and defenseless population.

In conclusion, informed people globally know that governments are rapidly running out of time. It is both imperative for and urgent that democratically-elected governments finally exercise dominion over electric power producers and subordinate the latter to government agencies that are adequately staffed with competent professionals, knowledgeable about the hazardous health effects of non-thermal EMFs, whose job it is to interject if/when necessary to protect the safety and health of the public. Provincial governments must finally put the onus on industries that produce EMFs to first prove (using independent, qualified EMF experts having no ties to industry) that their technologies are SAFE to be used by on and/or around people, of all ages, of all sizes, of all levels of wellness, on a 24/7/365 basis, in perpetuity;

It is equally imperative for the Government of Canada’s health agency and Canada’s entire healthcare industry to adopt the findings of non-industry scientists, such as: the European-based ICEMS (International Commission on Electromagnetic Safety), the BioInitiative 2017 Report, Physicians for Safe Technology, Scientists for Wired Technology, Canadians For Safe Technology (C4ST), Environmental Health Trust, etc. Also, the Government of Canada must immediately:

I am a retired Canadian Armed Forces captain (commissioned from the ranks in what was then the Royal Canadian Navy) who spent 22 of my 26+ years in the ‘Forces’ in Electronic Warfare (EW) and Signals Intelligence (SIGINT), the former of which included two years in National Defense Headquarters (NDHQ) Ottawa, in the Directorate of Electronic Warfare (DEW). In EW I worked closely with U.S. and NATO armies and, of my own initiative, attended a major NATO army EW officers’ course in Anzio, Italy, and participated in a major NATO army EW field exercise in Germany. I accepted invitations to visit both the U.S. Pentagon and, subsequently, Fort Bragg, North Carolina (the US Army’s principal EW base). Earlier still, I conducted Radio Warfare/EW at sea aboard two Canadian warships. In SIGINT, I was the Executive Officer and Operations Officer for two years at one of Canada’s largest and most sensitive radio intelligence-gathering stations, where I employed some 200+ specially-trained radio operators who conducted both COMINT and ELINT under my direction. Throughout this period, I worked closely with the USA’s NSA and Britain’s GCHQ.

Although I finally retired in 2005, since 2008 I have spent most of my time researching, writing and speaking out publicly on all aspects of this unbelievably evil issue caused by the corrupt US military-industrial complex. History will record that this ongoing corruption now literally threatens all life on earth! Tragically, too few Americans heeded then U.S. President Dwight D. Eisenhower, in 1961, when he warned them to be on guard against the emergence of a corrupt US M-I-C!

On leaving the Forces, in my second career, which also lasted 26-years, I was extremely fortunate to have a client list that eventually included the Saudi Arabian government plus other large multinational corporations who collectively had major operations and/or projects in various countries on five continents. Consequently, I quickly embraced all things wireless: a Blackberry cell phone, Wi-Fi routers (in the office and at home); cordless phones (both locations), microwave ovens (both locations), laptop computer (wireless, of course), Bluetooth cell phone and heated seats in my vehicles, electric in-floor radiant heat in my homes, not to mention the silent and invisible EMF/EMR I was exposed to in my working and living environments.

In the fall of 2016, cancer very nearly took my life! Out-of-the-blue, I was suddenly stricken with a particularly virulent form of non-Hodgkin lymphoma – which, in hindsight, I attribute solely to my own indefensible stupidity and naiveté in presuming that Health Canada had tested and verified that all wireless electronic products on the market were ‘safe’ for the public to use! My weight quickly dropped from about 175 lbs to less than 130 lbs, and I required an oxygen machine to breathe day and night! In retrospect, were it not for an excellent medical team and for my beloved wife’s tireless attention and endless nursing, and for her stubborn determination not to let me go, I would not be here to fight this Mother of all Crimes!

2 thoughts on “The Dangers of Modern Electricity”