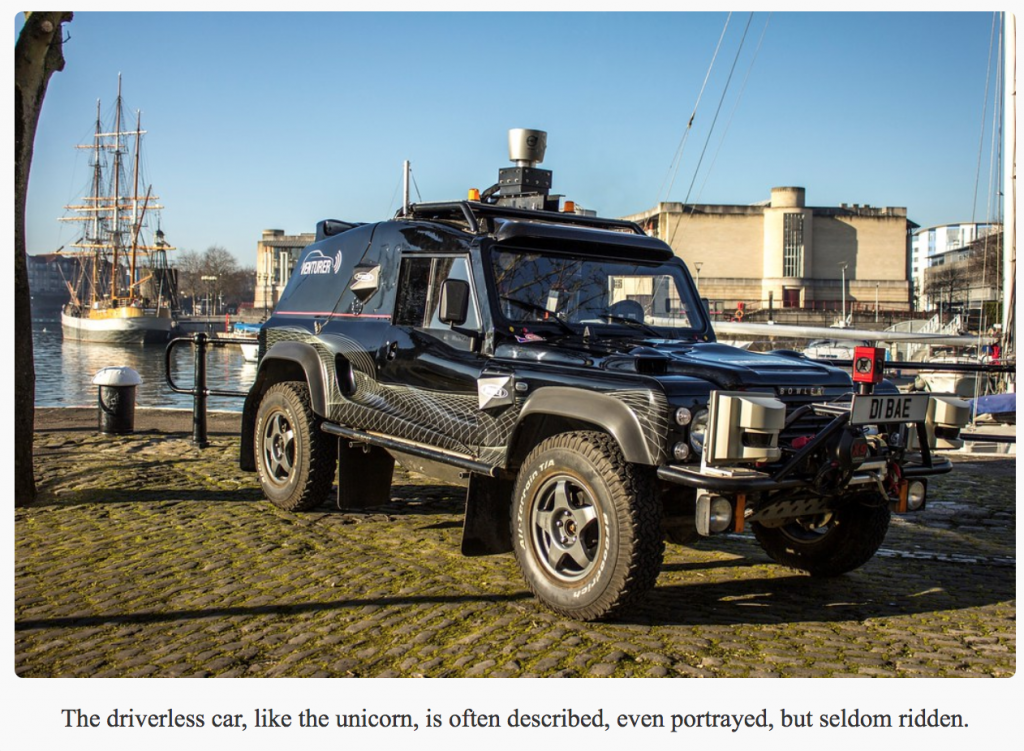 Eric Adams, writing about this subject on TheDrive.com, startled me the other day by pointing out that five years ago, nobody was talking about driverless cars. But then the huddled masses rose up as one and demanded universal driverless cars as a fundamental human right.

Um, no, that wasn’t what happened. What happened was that Big Tech and Big Auto, seeing massive global declines in sales of, and interest in, their products, decided that the way to convince future consumers to go into debt for something they don’t really need was — ta-da! — the driverless car. They also concluded — and in this they were absolutely right — that any company that could create a little buzz about their prospects for making driverless cars would have firehoses of cash turned their way by wealth managers, hedge funds and the like.

By four years ago, tsunamis of money were washing over Tesla, Uber, Waymo (formerly of Google), Apple, and any business that could work the word “driverless” into a news release. A study by Business Insider released in April of 2016 predicted that there would be 10 million driverless cars on the road by, um, 2020. That would be, like, now.

(Good Deception Number One: the word “driverless” as used by these folks does not mean “without a driver.” I amuse myself these days by asking people to guesstimate h0w many driverless cars are on the road in the U.S. Responses usually range from a few hundred to a few hundred thousand. The correct answer? Zero. Read far enough into any news story about a new deployment of “driverless” cars and you will find a driver, and often an engineer as well, sitting at the controls. Here’s a good example.)

So how’s the driverless horseless carriage revolution coming along? Let’s review the state of play since last we checked:

Somewhat like the legendary dead mackerel by moonlight, the shine of this whole idea of driverless cars is being overwhelmed by its stink. There are many more good deceptions out there — Elon Musk of Tesla has been predicting the arrival of truly autonomous driverless cars in just a few more months, for years now. But the CEO of Volkswagen’s autonomous driving divisions said this month, “This is one of the hardest problems we have. This is like we are going to Mars. Maybe it will never happen.”

I rented a Toyota in December to travel to Atlanta. I don’t like this brand; Toyotas tend to blow about in cross winds and are aesthetically lackluster. But it’s all the rental agent had on hand.

As I was driving, a strange thing happened – the cruise control exhibited an unexpected autonomy. It seemed to sense the distance and speed of the vehicle ahead and adjusted its own speed to maintain what it deemed a ‘safe’ distance…Like I’m too stupid to drive a car!

Later that day a car darted into my lane and I had to slam the breaks to avoid a collision. The engine
immediately cut off, leaving me dead in the water on a 70 mph highway. I immediately turned on the ignition and the car started up once more, avoiding a rear-end collision by inches. I continued my journey in a state of terror, never knowing what decisions the car would make – what surprised lay in store.

When I complained to the rental agent about the engine cut-off, he explained that this was a safety feature intended to insure that, in the event of a collision, the electrical system would be inactive, thereby reducing the chance of fire. He mused that the car’s computer had mistakenly assumed that the emergency breaking was a collision. He said he would report the matter…Great!

When did it all start – this trudge toward smatter cars and stupider, less active humans? Perhaps when the physicality of driving was mitigated by power steering, power breaks and mechanized windows; certainly when automatic transmissions and cruise controls became standard. I guess it will end when human engagement in the day-to-day affairs of living becomes entirely unnecessary.