Utility earth current is real, dangerous and ubiquitous, yet it is rarely mentioned by the mainstream. It is the return current, running from consumers back to the utility electric generators through the earth. This is a sub-topic of the industrial EMF disaster.

Few can afford to litigate against public funded utilities, but some have and won, as this table from Iowa State University shows: 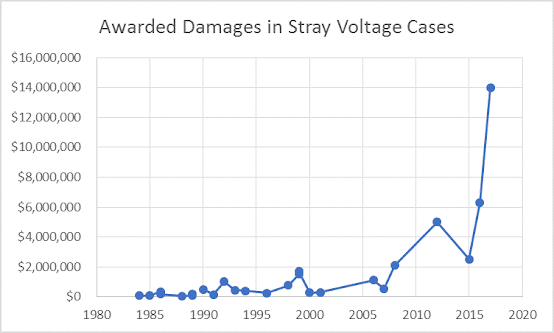 The reality is infinitely worse. This current kills and tortures humans, wild animals, bugs, farm animals and microorganisms, everywhere in the USA and most any industrial region. The global ecology is destroyed, yet I doubt many biologists are discussing this with any import. An example of human tragedy is the Desert Rose story.

All fluctuating electric currents produce electromagnetic radiation (EMR). I postulate that disease is also caused by industrial earth current EMR (as well as the ground current itself). This assertion is based on over two years experience studying utility earth current.

My experiences below have demonstrated that there is no escape from industrial environmental torture. Pollution from air, food, water and EMF can be escaped, however, not easily, earth EMR.

However, the latter experiments, below, indicate a grim optimism.

If there is a place where this current and its EMR does not exist, I would like to know, so I could move there. Maybe certain seashores or remote areas. Possibly, if one could map power plants, substations, and consumers, one could plot safe areas.

Pending that, I am trying to determine the safe distance above ground level, which could be comfortably tolerable.

Utility earth current is recognized as a hazard, however, the related EMR seems to be a new concept. No documentation has yet been found for this type of EMR.

The main symptom is RLS (Restless Leg Syndrome). The mainstream merely declares this to be caused by nutritional deficiency or describes it as a neurological condition. As usual, Medicine describes disease as the fault of the victim.

WHO forbids doctors from interpreting symptoms as EMR/EMF related.

Example: A friend, age 45, did not heed my EMR advice re RLS. He went to see a doctor. He was anesthetized and his brain analyzed with MRI to find his dysfunctional sleep center and to design his drug treatment, which he then began. He was then content, sleeping well, then two months later, he had a stroke. A month later, he fell onto the floor of a supermarket unconscious. He continued to ignore my warnings about EMR/RLS. His prognosis doesn’t look good for iatrogenic disease.

The best test for EMR symptoms is to fall asleep in the test environment. The transition into sleep is a subtle biological activity which will reveal and trigger nervous symptoms (RLS and muscle spasms). Sensitivity to symptoms should greatly improve with the subject free of drugs of all types (caffeine, chocolate, nicotine, marijuana, alcohol, Medical and street drugs). The second best test is to merely observe symptoms of nervousness.

EMR intensity appears to be related to the distance from the source, and the causative current is related to earth moisture content. The table below reflects these assumptions.

This table is chronological. The good news is that the latter experiments find it possible to avoid earth EMR!

Could sleep but RLS, no cramps.

Could sleep but mild nervous legs.

Could sleep, but mild RLS.

2020/05    Tucson apartment        Months of living with 20 Internet routers showing
on my WiFi Analyzer App. This is not a ground current issue. Just showing context.

RLS and leg cramps every night for five nights, getting worse each night.

I did not leave because I was desperate to deny this horror, and
I was struggling through my fear of pumas in the night.
EMR suspicions began but I stayed in hopeful denial.

On the fifth morning, I woke up with massive cramps, legs, stomach and jaw clenching.
Almost broke my teeth. I got the hint, and went home saddened.

For one month afterwards, I had swollen ankles,
which diminished away over the next two months.

Simultaneously, as the ankle swelling diminished, the right calf muscle
became swollen 30% in volume. This is not a problem, as this appears
to be an inflammatory processing center for EMR stress, and not disabling.

This episode was the worst of all my earth current EMF experiences.

This was a great relief from my apartment RLS. Feel asleep happy.

In 4 minutes, RLS. 20 minutes later, severe leg and stomach cramps as I attempted
to right myself to leave the area.

After 30 minutes rest, good but some mild RLS

Mild RLS, though less intensity than on the wood floor.
To date, this was the best of all prior earth current EMF experiences.
Discovered a smart-meter seven feet from my sleeping position, though
breakers were all off. It was shielded by its metal box. Don’t know if it was
transmitting. This added complexity to the test.

Rested flat on the carpet for 20 minutes, and felt calm, no RLS.

2020/11/11    Tucson    Attic of vacant house, 10 feet above ground level. Late morning. I tried to fall asleep for one hour, however, I was too well-slept to sleep. Nevertheless, no RLS occurred and that was without shielding fabric. This is an optimistic observation, as this experience was the best so far during the entire year of 2020.

Plan: Try other locations and distances. Try to fall asleep.

2020/11/13    Tucson    Attic of vacant house, less than 10 feet above ground level.  Spent 90 minutes trying to sleep. Felt comfortable and no RLS, but did not fall asleep (too well-slept, and rafters are uncomfortable). I plan to try again to transition into sleep. It is good to find that at 10 feet distance, or possibly less, maybe 5 feet or less. At least, presently, I’ve established that RLS is not perceived at 10 feet. Voila!

2020/11/14    Tucson     This experience was not intended to be a test. I was sitting on a big rock on a hill, playing guitar. The right foot was flat on the ground, the left was up on a small rock. After 20 minutes, the right foot felt nervous. I moved it up on a rock and the nervousness subsided. I kept on playing guitar. I’m getting good at this, becoming naturally aware of how to correctly interpret symptoms. In my pre-aware days, I would have thought nothing about a nervous foot. I would just move my foot and express frustration. Context: Andrew A. Marino, PhD states that eyesight was a set of EMR symptoms in a narrow high frequency band, called “light”. I’m cultivating EMR sight related to an electrosmog that does not show up on the usual EMF meters, however, the current flow that is its source, can be measured. I plan to measure the earth current with my multimeter soon.

Utility earth EMR is earth-bound electro-smog that diminishes to a tolerable level at 5-10 feet distance. Symptoms such as grinding teeth, jaw biting (tongue or mouth), and any nervous behavior, are likely the result of EMR or a synergy of EMR with other pollution sources (if the more commonly known EMR/EMF is not a factor). Any industrial radiation is synergistic with other pollution poisoning, even that which has happened long ago in the womb, e.g., with prenatal ultrasound or X-rays. This is determined from a decade of experience partially documented above, and noting the results of hundreds of EMF studies at bioinitiative.org

In summary, most humans are being poisoned to one degree or another, both chemically and electrically, on an unrelenting, ongoing basis. To paraphrase from memory the toxicology book, Casarett & Doull – The Basic Science of Poisons,  “Environmental poisoning often occurs and the public is not usually aware of this. When they become aware, corrections are sometimes made.”