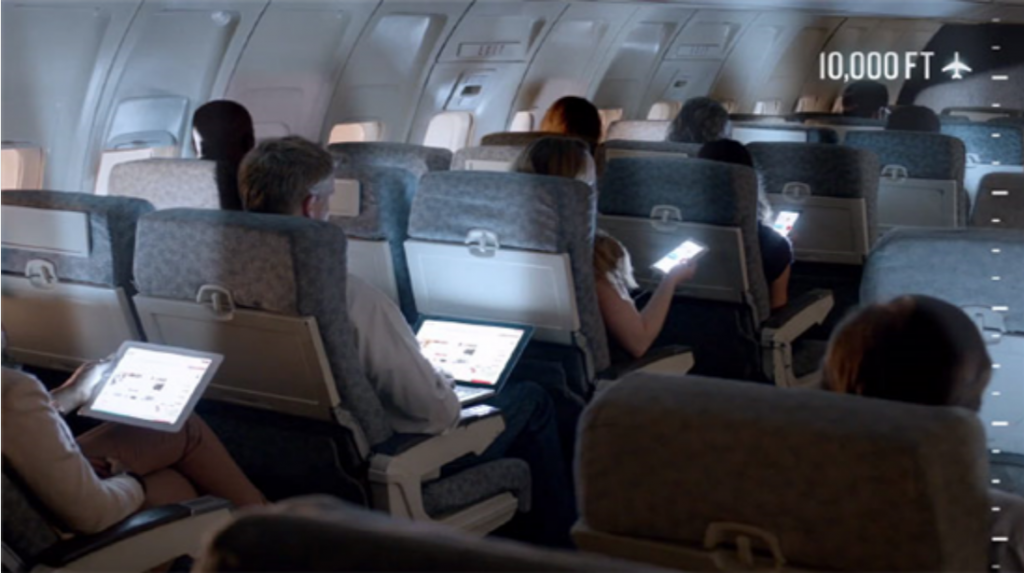 Public transportation is now excessively Wi-toxic for everyone. Airport terminals and ground transportation depots are microwave sewers. Within the resonant metallic cavities of cars, buses, trains and planes, numerous transceiving wireless devices propagate carcinogenic radiation far more pernicious and invasive than second-hand tobacco smoke. Passengers standing in line to have their private parts inspected by US airport security should be aware that techno-terrorists are in absolute control of the aircraft they are about to board. Captives stuck for hours in these venues are at risk for radiation damage to hearing, eyesight and brain function as numerous environmental frequencies couple with the flesh to create hotspots in various tissues and organs.
Most commercial plane in the US are encumbered with Wi-Fi antenna systems which irradiate passenger compartments continuously to provide Internet connectivity. In addition, multiple personal Wi-devices, emitting near-field microwave radiation within a metallic enclosure, expose all passengers to numerous frequencies of wave carcinogen. A good audio microwave detector literally SCREAMS in response to the dense fog of wave radiation reverberating inside an aircraft cabin. No warning signs on microwave radiation hazards are posted.
The following chart provides a good visual of the VOLTAGE OF CANCER that permeates the cabin of commercial airliners. It shows how cellular phone signals (red and green) and Wi-Fi signals (purple) combine to create a toxic environment from which there is no escape. The left hand metric shows the volts per meter (the signal strength) of each carcinogenic spike of energy impacting human bodies throughout flight.

CLICK HERE FOR THE DOSIMETER CHART
OF MICROWAVE RADIATION INSIDE AN AIRCRAFT CABIN
Wireless infrastructure on passenger planes has documented potential to disable or even kill during flight. At high altitudes, one man’s Wi-gratification can be another man’s cancer acceleration, heart malfunction or seizure. Inescapable microwave irradiation during air travel can trigger brain edemas, blood pressure abnormalities, heart attacks, strokes and embolism in susceptible persons, especially at high altitudes where oxygen is deficient.
German doctors have summarized the myriad organic disasters that occur within the irradiated bodies and brains of both passengers and flight personnel during a “Wi-hot” flight. These effects include: abnormal EEG changes in brain waves, opening of the blood-brain barrier to toxins (especially likely at high altitudes), clumping of red blood cells (deprives brain cells of oxygen), headaches, drowsiness, vertigo, nausea, a slowing of neuromuscular responses and a doubling of reaction time. Wi-irradiated people are notoriously sleep-deprived and hormone disrupted. [93] Here again, countless lives depend upon altered cognitive abilities of heavily-irradiated flight crews. THE GERMAN REPORT
These days, flyers are simultaneously irradiated by: airport radar installations, airport body scanners beaming experimental millimeter waves; in-plane microwave communications systems; cosmic ionizing radiation and high counts-per-minute of beta, alpha and gamma radiation, which reportedly pollutes the upper atmosphere. [94] A reliable source reported in December 2014 that his handheld Geiger counter (Inspector) registered 900+ counts per minute during his flight from Portland to Los Angeles, while his reading on the ground was only 60 counts per minute. He wrote: “It appears that the bulk of radiation from Fukushima still resides in the upper atmosphere.”