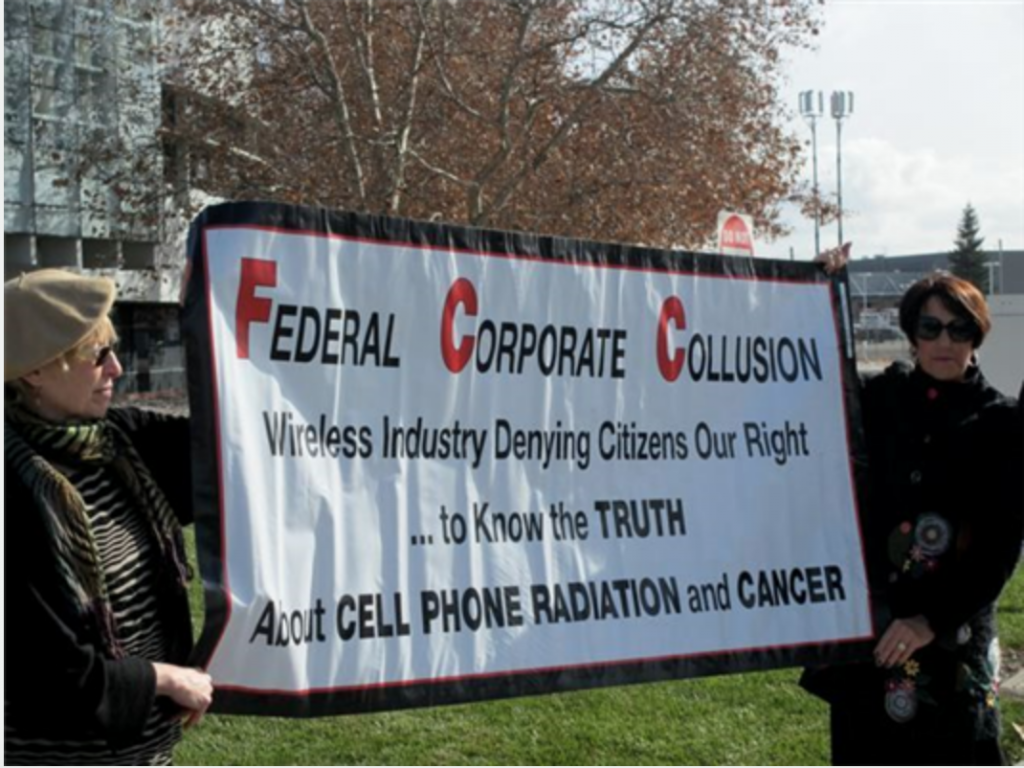 Congress has awarded the Federal Communications Commission (FCC), comprised of five political appointees, sole authority to regulate public exposure to dangerous communications and broadcast radiation. The FCC married Motorola in the 1970s when engineers and commercial interests, ignoring medical and scientific data on the risks, were fairly rabid to hatch wireless technologies.

Today the FCC rakes in $billions by selling RF/microwave spectrum to radiation profiteers, a gross conflict of interest. In addition, the Wireless Radiation Industry has long maintained iron-fisted control of the FCC and therefore always “regulates” itself.

Between November 2013 and January 2017, the FCC was chaired by Obama appointee Tom Wheeler, a former CEO of CTIA-the Wireless Association, and a long-time lobbyist for the wireless industry. It was Chairman Wheeler who announced that 5G millimeter wave technologies will be unleashed nationwide without mercy.

The current FCC chairman, Ajit Pai, is a former Verizon attorney who confirms that he will continue Wheeler’s destructive trajectory for the infinite expansion of all things wireless. This radiation czar, with Congress in tow, vows to expedite a maze of new Wi-Fi and broadband networks, to be partly subsidized by increased phone bill taxes. [78]

Whenever challenged, the Wireless Radiation Industry claims that its addictive Wi-products and services comply with FCC regulations. But FCC’s antiquated standards for public exposure to RF/microwave radiation were developed decades ago by military-industrial interests. Phone exposure standards are based on conjectured thermal (heating) effects on large, healthy adult males exposed to microwave radiation for only a few minutes.

These ancient safety guidelines are not germane to new, powerful Wi-devices, such as tablets embedded with multiple antennas and used by kids for hours each day. Likewise, unrealistic exposure standards do not protect public health from huge antenna farms in populated areas because they do not address the long-term biological effects of chronic exposure to fetuses, children and the immunologically frail who are forcibly irradiated 24/7 at close range with numerous microwave frequencies simultaneously. Most tragically, exposure standards, which recognize only thermal effects, do not address the horrific non-thermal effects of today’s Wi-radiation: severe DNA damage, oxidative stress to cell membranes, blood-brain barrier breakdown and myelin damage to the central nervous system.

Thousands of health studies and scientific reports have convinced many bio-scientists that current FCC exposure guidelines for RF/microwave radiation are dangerously obsolete. Scientists who authored the 2012 BioInitiative Report recommend that the FCC’s antiquated public exposure limits be updated to reduce public exposure by hundreds fold. In 2012, the General Accounting Office (GAO) instructed FCC to reassess its RF exposure limits and also its mobile phone testing requirements to reflect the latest research regarding cell phones held against the body. [79] In early 2014, hundreds of individuals, organizations, government agencies and medical experts submitted written requests to the FCC, demanding an update for federal regulations regarding public exposure to both cell tower and cell phone radiation. In 2016, experts wrote to the FCC with evidence that 75% of the mobile phones on the market exceed FCC’s obsolete and dangerous standards. [80]

But FCC is a bureaucratic dictatorship beyond accountability. It thumbed its nose at GAO’s safety recommendations and it routinely ignores all public comment. With Wi-industry reps always at the helm, the FCC’s obsolete RF/microwave exposure limits remain as deadly as ever.

In 2015, the Edmund J. Safra Center for Ethics at Harvard University produced a comprehensive expose on how the Wi-industry captured the FCC for its own corrupt and lucrative purposes.

80. “FCC: 98 Scientific Experts Demand Stronger Regulation of Cell Phone Radiation,” PRLog, August 4, 2014. Joel Moskowitz, Ph.D., School of Public Health, University of California, Berkeley. In the matter of 75% of mobile phones on the market exceeding FCC emissions standards, lawyers Swankin and Turner wrote to the FCC in September 2016, on behalf of the Environmental Health Trust and the National Institute for Science, Law and Public Policy, presenting this evidence.