I Am an EMF Refugee

I can feel Wi-Fi.

And power lines. And smart phones. And electric heat. And LED lights. But, before you get too excited about my real-life “Spidey sense,” let me warn you, it does not feel good. And I didn’t always possess this extrasensory perceptive power. 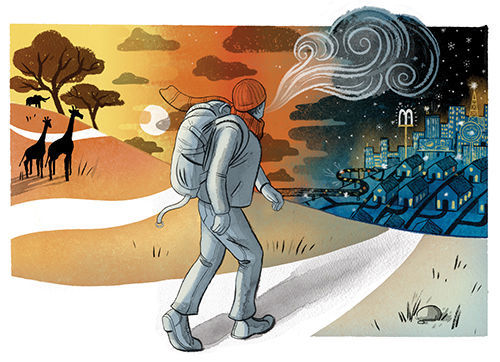 I was a New York City media maven for 15 years. I strode into dazzling skyscrapers with Don Draper and Peggy Olson wannabes. I clinked glasses of dirty vodka martinis with beat reporters and fedora-wearing publishers. I dwelled in an overpriced studio on Manhattan’s sublime West 57th Street. I stressed over deadlines, sipped wine on rooftops and hopped subways in heels — all with a sparkling, enchanting metropolis of international envy to call my home.

And of course, I had all the digital toys to accompany this persona: A creative director’s dream of a Mac computer system, the smartest smart phone of the moment, the fastest of the fast wireless networks, the streaming tunes, the apps for that, the iEverythings and the incessant surge of digital pings directing and announcing my every move.

That was my life until a few years ago. And now, I am an EMF Refugee.

I wander in exodus seeking asylum from a fierce and escalating worldwide storm of artificial and damaging electromagnetic fields (EMFs). I’m a fugitive on the run from wireless frequencies. I’m an émigré fleeing persecution from dirty electricity. I have relinquished any concept of possession, ownership or permanent residence, ready to pack up and escape for my safety on a moment’s notice. But in a world now filled with overlapping, omnipresent radiofrequency and pulsed microwave technologies, where exactly should I flee? Where is it safe? That is always the question. And there isn’t always an answer.

With my bank account drained from decades of undiagnosed illness and failed medical intervention, I must rely on the kindness of friends and strangers to grant me temporary safe haven — to disable their Wi-Fi, to unplug their cordless phones, even sometimes to shut down their energy-efficient electronics or entire circuit systems — just so I can sleep, so I can eat, so I can rest, so I can work, so I can think, so I might possibly heal. And then, inevitably, energy forces me to move again.

We are humans, and we have evolved with a broad spectrum of natural electromagnetic fields innate to our Earth and the universe. But we are also now being barraged by harmful, man-made, unnatural frequencies — all invisible to the human eye but irradiating us nonetheless. And it is this electrosmog that quite literally makes me sick.

I’ve always been a sensitive individual – emotionally, physically, creatively — so in theory, I was a prime candidate for this condition. But, there was a catalyst. In my mid-30s, I considered my college futon days finally behind me. My apartment needed a grown-up comfy cushy sofa to welcome my guests or my solitary midnight TV screenings. So, I ordered a plush microfiber loveseat from a prominent furniture retailer. No sooner was it delivered than I began to experience a frightening, systemic, neuro-immunological breakdown. In a scene right out of a Marvel comic book, this electrically-charged, chemically-infused synthetic couch created an unusually powerful static-electricity vortex, thereby electrifying and shocking everything inside my apartment — including me. From that moment on, I’ve been EHS.

I see the stares, the glances, the disbelief, the doubt. I see people humoring me. Terrified of me. Placating me. Dismissing me. I hear the hushed tones: “That’s the girl who thinks she can feel Wi-Fi .” Everyone wants proof. But you can’t see what I feel. And when I present the hard evidence — the myriad international, peer-reviewed studies on the harmful biological effects of EMFs, for instance — people turn a deaf ear. Because no one wants any of this to be true. No one wants to imagine for a second that their digital devices might be harming them; or that their smart gadgets might not be so smart after all; or that their hyper-connected homes, offices, cars and transport systems might lead to a public health crisis of epic proportions.

Well, why can’t this be true? Humans are bioelectrical beings. Our bodies, our hearts, our brains operate based on electrical impulses. Maybe the most sensitive of us humans can actually feel the difference between good energy and bad energy.

People always want to prove me wrong. Some have covertly turned on their Wi-Fi routers in my presence, just to see if I can feel it, when I don’t know it’s transmitting. Guess what? I can feel it. I always do. And they’re always astonished. But that’s not a fun parlor game for me.

People like to prove the science wrong, too. They call out “non-specific symptoms.” They cherry-pick the data. They call EHS a “nocebo” that is leading people to feel ill because they think they have been exposed to something that might sicken them. But I challenge those doubters to delve into the published research. And maybe to consider that in 2011 the World Health Organization reclassified radiofrequency electromagnetic fields as “possibly carcinogenic to humans” based on an increased risk for glioma, a malignant type of brain cancer.

“But what does it feel like?” This is the most popular question I’ve been asked in the last three years. In a nutshell — it feels like unremitting, wired, electrified torture. It feels like I am fused with a force field, that I’m no longer human but part of a circuit. It feels like my body is pulsating to an artificial frequency. If I were to check off some boxes in a physician’s waiting room, my symptom list would include numbness, tingling, muscle twitching, vertigo, loss of balance, pressurized headaches, spinal pain, rashes, insomnia, memory lapses, cognitive dysfunction, altered heart rate, tinnitus, fatigue, gastrointestinal distress and urological spasms — just for starters.

My symptoms worsen to torment based on dose and duration of EMFintensity, and diminish only with distance from the offending source. Which means, if there’s something energetically hurting me, there’s no waiting it out, there’s no “maybe I’ll get used to it,” there’s no “Alison, can’t you just deal with it?” And if I can’t shut it down, there is only one thing to do:

And then find another safe space . . . any safe space . . . even if that space is a neighbor’s backyard. Or a converted workman’s shed on an upstate New York farm. Or a remote cottage on a dirt road in Rhode Island. Or a friend’s car in her driveway. Or a pew in a local church. All of which I’ve called sanctuary when left with no other recourse.

You’d be surprised how many loved ones are unwilling to unplug their digital worlds, even for a few nights. You’d be astonished how many people choose their streaming movies over your very existence. Or maybe they simply don’t see it that way. Maybe it’s not a lack of caring. But it is a lack of awareness. A lack of understanding of what EHS means for the suffering individual. And how there is yet to be a network of safe houses for people with my condition. And how there’s no pill or drug infusion or hospitalization that will magically “cure” the individual or make the symptoms disappear. And how it’s not “just a headache” that’ll go away by morning. And how at its most severe, an EHS individual can suffer a heart attack, a seizure, or a stroke. Which is why — roof or no roof — like all war-torn refugees, I always leave when under siege.

In living my very own dystopian novel, I’ve discovered a hidden network of EHS comrades around the globe. Former designers, lawyers, bankers, pilots, teachers, students: brilliant, accomplished, hard-working, highly educated individuals of all ages who have been forced to leave their career, school, home, family, friends and community, their financial worth, their entire reality, to go off the grid in order to heal. To seek peace within their bodies, to make the pain stop, to be able to breathe again, think again, sleep again, exist again.

These people have become my lifeline. They answer my panicked messages at 1 a.m. when a sudden change in energy makes my sanctuary no longer safe, when I’m in pain and scared and need a friend who just gets it. They’ve given me tips and tricks on how to use a computer (here’s one: get an internal “solid state drive,” and use with a wired external keyboard and mouse), where to sit in a car (usually in the back, farthest from the driver’s seat), and what type of light bulbs are best (incandescent).They’ve urged me to keep going, to overcome all obstacles; told me that I’m strong enough, courageous enough, and resilient. They can tell me this because they’ve endured it all as well. Because to survive, they’ve slept in their own cars and in shacks and tents in the wilderness. They also feel the immense power of energy. Brave new world, indeed.

You don’t become electro-hypersensitive without spending some serious time contemplating energy in all its forms — scientific, metaphysical, spiritual. According to the laws of physics, energy can neither be created nor destroyed. But, leaving the intricate calculus formulas for the textbooks, what this theorem means to me is: Energy is everywhere. And energy is everything.

Thoughts are energy. Words are energy. Movement, breathing, sound and creativity, love and faith are all energy. Energy can be blocked, stuck, fragmented, balanced, depleted, stolen, open or closed. Energy can fuel you, or it can enervate you. It can attract or repel. It can be positive or negative. But no matter what, energy is constant.

And now, despite my profound physical and material losses, I have nonetheless found connection within disconnection. I’ve discovered stillness, hope, heart, infinite love and divine compassion. There’s transcendence in embracing such impermanence, in letting go of surface desires and goals. I’ve become grounded within my present. That is where I can dwell, regardless of what physical structure (or lack thereof) serves as my fleeting peripheral residence.

So I put my bare feet in the dirt. I stretch my hands around a tree. I look up beyond the power transformers and see magnificent cloud formations. I feel the pulse of earth and the ebbing frequency of the wind. I find the healing rhythms within nature, within love, within a gracious power guiding me through it all. And I can sense, within every fiber of my being, that we are all one, entwined in spirit, and connected by energy.

Alison Main is a freelance graphic designer and writer with a focus on environmental health, EMF safety and natural living. You can read her nonfiction essays at uncommonalchemy.me and her published work at alisonmain.me.

1 thought on “I Am An EMF Refugee – by Alison Main”