Did you know that your wireless devices are emitting both electromagnetic radiation and ultrasonic (acoustic) radiation?

Did you know your body is being slammed by both horizontal and vertical, radiation-emitting waves every time you pick up a wireless device?

Did you know that millions of people in the world can actually hear ultrasound?

Did you know that the medical establishment is deliberately misdiagnosing these people with “tinnitus” in order to cover up the fact that it is the noise from wireless devices that is driving people insane?

If you’re concerned about your privacy, it was reported last year that U.S. government tracking software had been installed in hundreds of mobile apps.

Of course, businesses have always been very interested in customers’ personal habits too.

A 2018 article provides more details about how software apps collect user data often without their knowledge or consent. 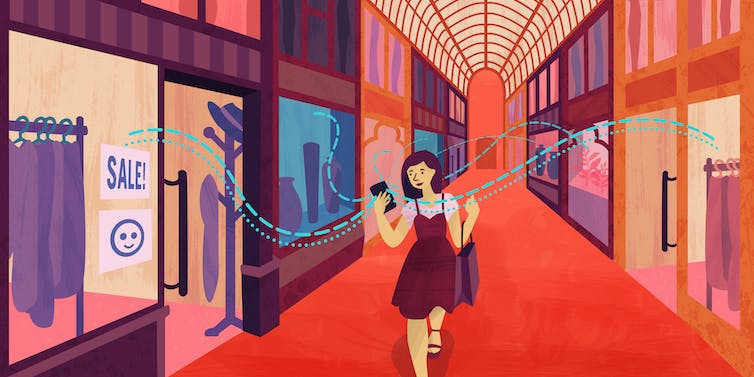 My lounge room is bugged. My phone is broadcasting an ultrasonic signal to my blu-ray player via an acoustic side channel beyond human hearing.

The channel networks the two devices, similar to how a dial-up connection used to get our computers online before the days of the NBN. The same technology is behind Google’s Nearby API through their Eddystone protocol, and is the basis of products sold by the startup Lisnr. It’s also the reason more and more apps are requesting access permissions to your microphone.

Aside from networking, companies use ultrasonic signals (or beacons) to gather information about users. That could include monitoring television viewing and web browsing habits, tracking users across multiple devices, or determining a shopper’s precise location within a store.

They use this information to send alerts that are relevant to your surroundings – such as a welcome message when you enter a museum or letting you know about a sale when you pass by a particular store.

But since this technology records sound – even if temporarily – it could constitute a breach of privacy. An analysis of various Australian regulations covering listening devices and surveillance reveals a legal grey area in relation to ultrasonic beacons.

How does ultrasonic data transfer work?

Google Nearby enables Android phone users who are in close proximity to each other to connect their devices and share data, such as documents or media. Google says:

To share and collaborate in apps, Nearby uses Bluetooth, Wi-Fi, and inaudible sound to detect devices around your device. (Some people can hear a short buzz.)

These inaudible sounds are ultrasonic beacons transmitting data that is then picked up by your phone.

To demonstrate this technology, I recorded such a beacon being broadcast in my lounge room while watching Netflix. In the below image you can see the audio ends around the 15kHz mark with the ultrasonic beacon beginning at 20kHz, the point at which average human hearing ends.

This means, in theory, that while the device could be recording sound, it isn’t keeping the parts of the recording that might include conversation.

Different filters process signals in different ways. While filters constructed from basic electrical components do not require any storage of the signal, digital software filters require the signal to be stored temporarily.

Is this kind of recording legal?

In South Australia, where I am based, a listening device is precisely defined as:

There is no exemption provided for recording sounds and then removing the audible portion.

It is generally unlawful “to overhear, record, monitor or listen to a private conversation” unless you have the express permission of all parties involved. Since audio is being recorded using a standard microphone in the course of an ultrasonic data transfer, the full audio spectrum – including any conversation occurring – is being sampled at the same time.