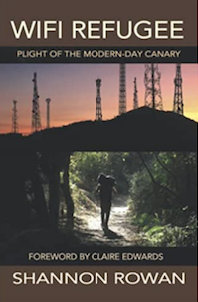 Have you ever wondered what it’s like to be one of a growing number of people who become ill when exposed to wireless devices?  Have you ever considered what it might feel like to be a “canary” — or someone who feels the effects of wireless radiation but is dismissed as crazy or labelled “electrosensitive” by the medical establishment that seeks to cover-up radiation sickness?

Now is your chance to learn about the real effects of wireless devices first hand — from the very people who have become ill and are trying to find a way to survive in our radiation-polluted world.  A small aspect of my personal story is included in this book.  I sincerely hope it is read by many.  Now available at Amazon.  Below is the author’s description of the book.

Millions of ordinary citizens from all over the world are being made to flee the rapid, ceaseless encroachment of wireless-communications grids. Having been struck down by the biological effects of the accompanying wireless radiation, in the midst of regular day-to-day existence, and often in the prime of life; they are the new silent asylum seekers, forced to search out dwindling safe havens free from the onslaught of microwave and millimeter-wave radiation.

Those who have become sensitized to these radiofrequencies are like the canaries in coal mines used in the early 1900s by miners to alter them to dangerously low levels of oxygen in the mines. The modern-day equivalent represents human “canaries” who literally feel the effects of dangerous rising levels of artificial radiation added to our environment. These “birds” are given diagnostic labels of “electro-sensitive,” but in actuality are simply suffering the ill effects of harmful levels of poisonous radiation—adversely affecting everyone in a myriad of ways, whether or not able to immediately and directly feel these effects. This radiation is being employed, wittingly or not, as the newest silent weapon in a quiet war now waged upon all of the Earth and its supported life forms. As a result of this relentless assault representative of dwindling oxygen reserves on our planet—the collective min, the canaries are often forced to continually move from place to place as radio-free safe havens are quickly altered and made uninhabitable. Marginalized from society and forgotten by the world, the “electrically sensitive” are truly refugees. These are some of their stories.

The canaries are trying to tell us something.
It is time we listen.

Check out the book here