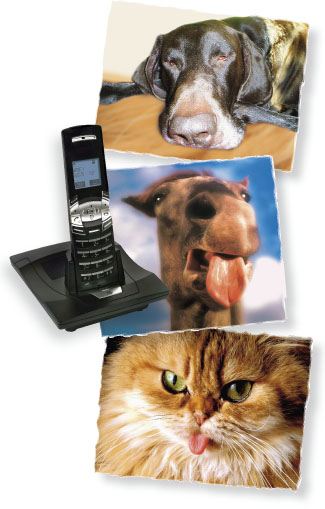 Whether horses, dogs or cats – a wireless DECT-telephone in the home harms all.

The following examples derive from the everyday practice of Christian Métraux. The veterinarian reported that a dog was lame in the fore legs and the hind leg for six months. The acupuncture diagnosis identified acupuncture points that are typical for the strain from high-frequency electrosmog. As soon as the cordless telephone had been taken away, the lameness disappeared. The healing process was aided by an acupuncture treatment. Unfortunately, the dog suffered a relapse when he was taken for the holidays to a family that had a DECT-telephone in their house. Three days after his return to his interference-free home, the ailments disappeared once again.

The owner of the dog suffered from headaches and painful joints (pain in her elbows, shoulder joint and fingers) for seven years. Both the family doctor, who had treated her for osteoarthritis, as well as a naturopathic doctor, who had prescribed elixirs to her, had no success. Without the DECT-telephone, most of her ailments completely disappeared after two months. Suggestively, only the headaches would appear now and then.

Electromagnetic high frequencies as an impediment to treatment: A horse suffering from chronic lameness in the right ankle. After four treatments, classical acupuncture brought about decent but only temporary success and arthritis could not be identified in the X-ray photographs. During every session, however, the same, typical acupuncture points were consistently disturbed, which in my experience points to a contamination of high frequency electrosmog. As soon as the DECT-telephone was removed from the house, the horse’s ailments subsided within a few days without any kind of further treatment. The horse has not relapsed since then. The owner of the horse owned a DECT-telephone for two years and, a year after this acquisition, she started suffering from intense pains in her upper jaw below her right eye. Dentists and eye doctors, acupuncture and changing the lenses in her glasses did not bring any success or solution. After the removal of the DECT-telephone, however, the pains—which had become almost unbearable—began to progressively subside after two days and completely disappeared shortly thereafter.

Electromagnetic high frequencies obviously disturb gland functions as well: A young dog suffering from chronic diarrhea and dysfunction of the thyroid gland. Different treatments were unsuccessful. After the cordless telephone was experimentally removed from the home, the dog became healthy. After weaning the dog off of hormone treatment, two further blood tests, taken 14 months apart from each other, confirmed that the thyroid gland was working correctly once again. The DECT-telephone was never plugged in again and the diarrhea never appeared again.

Electromagnetic high frequencies also lead to acute, spontaneous ailments, as the following example demonstrates: a horse with an acute, painful swelling in the area of its right hip. After three weeks of unsuccessful treatment, the horse was to be taken to the slaughterhouse. Since the typical acupuncture symptoms were present, we asked the owner to remove his DECT-telephone as a last resort, thereby discharging the electrosmog from the acupuncture points. And lo and behold: a rapid and lasting recovery occurred. In the meantime, the horse is working quite normally again and taking part in exhibitions!

A guinea pig suffering from acute occurrences of paralysis in its hindquarters. It was no wonder that there was a DECT-transmitting station in the room where it lived. The use of acupuncture led to an immediate recovery in the practice and the animal did not suffer a relapse, because the owners replaced their DECT-telephone with a classic corded telephone that very day.

Electromagnetic high frequencies lead to incurable skin and eye diseases: A cat was in the care of a veterinarian for a year due to a skin disease on the outside of the ear. Many salves and treatments were unsuccessful. A few days after the removal of the DECT-telephone, the skin lesion began to heal and then to fully convalesce. A second cat in the household is, furthermore, considerably less aggressive since then.