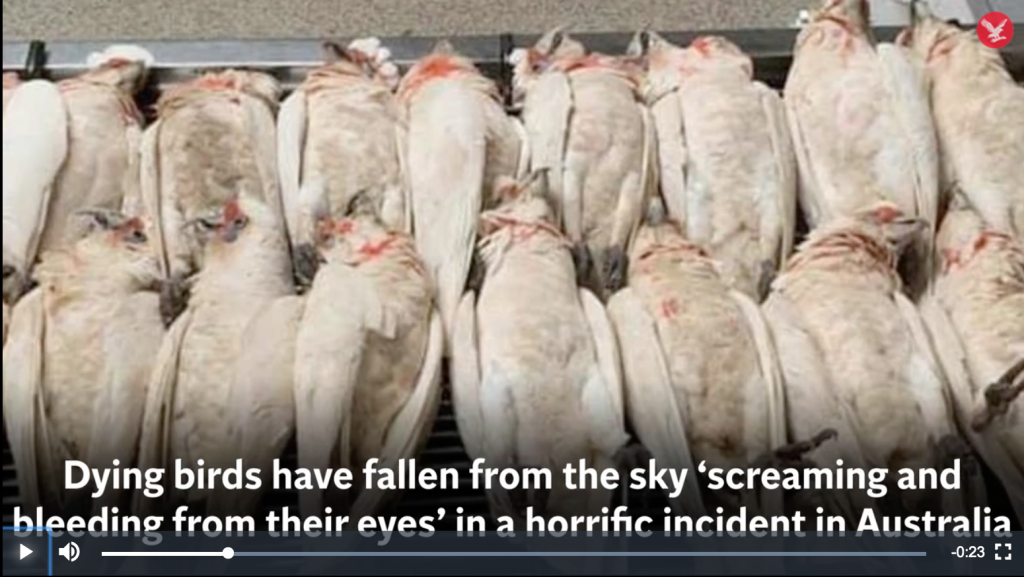 Sadly, the media make absolutely no mention of a 5G RADIATION assault as the possible culprit or the fact that 5G is currently being rolled out in Adelaide. But what these birds are showing us is that the radiation is causing BRAIN HEMORRHAGE and DEATH.  If we do not put a stop to this maniacal attack against Creation, we are lost.  This is similar to what happened in The Netherlands when they turned on a 5G transmitter and 300 birds in the park across the street fell dead out of the sky.

Almost 60 birds have died in a suspected poisoning in Australia after falling from the sky screaming and bleeding from their eyes and beaks in front of horrified onlookers in a scene “like something out of a horror movie”.

Rescuers called to deal with the calamity said 58 of 60 birds they found, near a school at One Tree Hill near Adelaide, had ultimately died.

The majority of the birds are a native species – the long-billed corella – which is protected.

Sarah King, the founder of Casper’s Bird Rescue, told The Guardian that one of her staff discovered the birds on Wednesday.

“When he got there, he rang me, really distressed, and said there were more than he could handle,” Ms King said.

She added: “Only two or three were actually deceased. The rest were just screaming on the ground. They couldn’t fly any more, they were bleeding out of their mouths … What we were seeing was something out of a horror movie.”

The organisation said they believed the birds had been the victims of a targeted poisoning. Other types of corellas are considered a pest in Australia, and non-lethal methods of moving them on are suggested by the local council.

But Ms King said the use of poison in this instance was “horrific”, causing a slow and painful death for the birds which could take many days to die in some instances.

It is not the first time large numbers of birds have fallen from the sky in apocalyptic scenes.

In 2011, as many as 5,000 birds fell to the earth on New Year’s eve in Arkansas, with many of them crashing into trees, lampposts and buildings. The phenomenon occurred in the town of Beebe, which had a population of 5,000 – mirroring the number of avian casualties and bringing predictions of bad omens and the end of the world.

It was thought loud fireworks could have scared the birds to death, or caused them to crash to the ground. The same thing happened in the same town the following year, though the second time just over a hundred birds died.