In another New York Times propaganda hit piece about the so-called “safety” of 5G, William Broad once again demonstrates a reckless disregard for The Truth and a clear intention to deliberately mislead people in order to cover up the dangers of 5G (see Broad’s first 5G propaganda hit piece here).

In his most recent article (see here), Broad makes reference to a graph that clearly demonstrates how the absorption of microwave radiation in the brain increases as frequencies go up. Here is the graph: 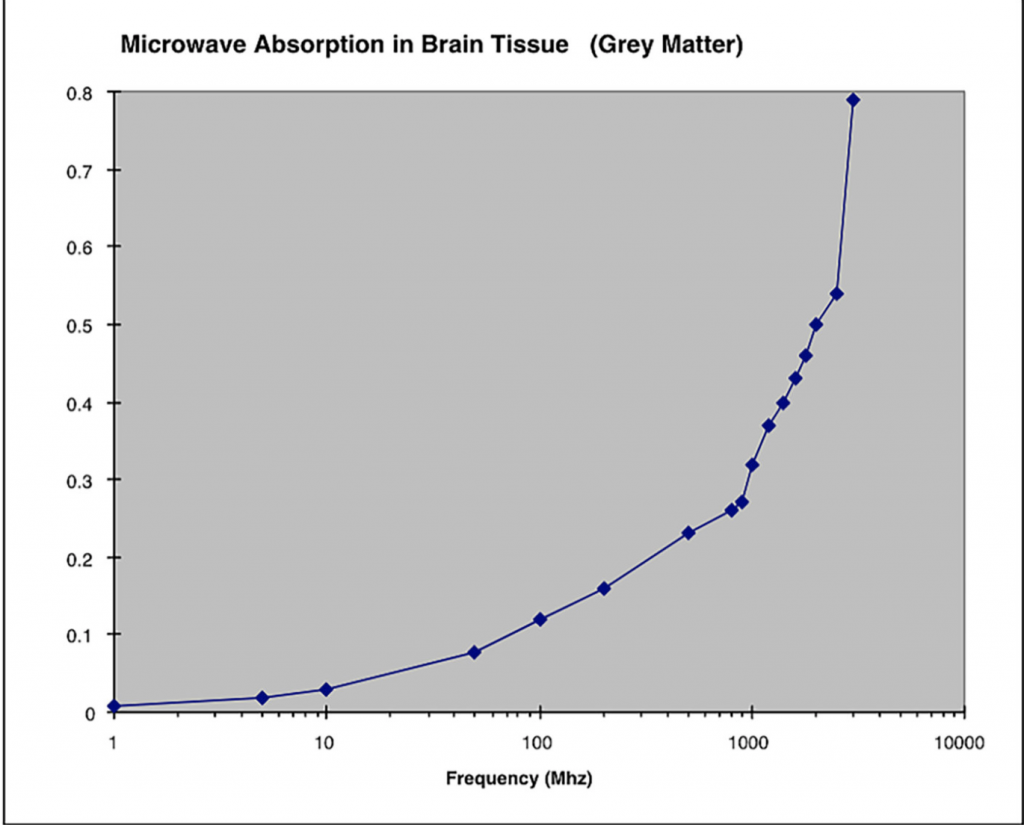 The graph not only shows how radiation absorption increases as frequencies rise, but as soon as the 2.4 GHz frequency is reached (that’s 2.4 BILLION hertz), the absorption of radiation spikes intensely.  Keep this in mind as you read the rest of this article because the 2.4 GHz frequency is an energy that can destroy our brains and the brains of our children.  And it is the very same frequency being used in cell phones, cordless phones, baby monitors, wifi routers, etc.

Naturally, the graph is very concerning since, despite growing pushback from the public, the telecom industry is nevertheless moving forward with their maniacal and genocidal 5G agenda.  If this agenda succeeds, it will ensure that humans and all life forms will be exposed to extremely high, technologically-produced frequencies that emit microwave and/or millimeter wave radiation.

Already children are becoming ill with microwave illness and/or “electrohypersensitivity.”  Children’s bodies absorb more radiation than the bodies of adults, and their bone marrow can absorb up to ten times as much radiation as ours.  You can read more about this here.

According to Barrie Trower, British physicist and microwave weapons expert:

Moreover, the 2.4 GHz frequency is the same frequency used in microwave ovens because it maximizes the absorption of radiation in the mammalian body.  This frequency is currently being used in cell phones, cordless phones, wifi routers, BABY MONITORS, smart meters, etc., despite the U.S. government finding out decades ago that this particular frequency can cause massive harm (see here, here, here, here, here, and here).

The frequency band that is used for cell phone radiation is the most destructive frequency in the entire spectrum.
— Dr. Dietrich Klinghardt

The USSR were the first, as far as I am aware, to warn us about using this frequency for common use.  Later, again, top scientists from the USSR and Canada warned us not to introduce the 2450 MHz into schools – fearing harm.
— Barrie Trower (in a personal written correspondence)

2450 MHz = 2.4 GHz.  It is a frequency that is known to cause DNA damage, along with severe cardiac abnormalities (see here, here, here, and here) that can lead to sudden death.  Two children just over 10-years-old recently dropped dead from cardiac arrest in a Canadian school that had recently installed a powerful wifi system (see here, here, and here).  Many children  are experiencing heart abnormalities, which should concern us all.

The 2.4 GHz frequency is also known to cause infertility (see here and here) and has been deliberately used by western governments to induce sterility by the 3rd generation of chronic exposure. According to Dr. Dietrich Klinghardt:

Despite the very real threats to human well-being (or perhaps because of them), the FCC deliberately opened up the 2.4 GHz part of the spectrum, to be used freely and without licensing, thereby ensuring that our entire society would be saturated with this particular frequency, dooming humans and all life forms to terminal reproductive decline.

In view of the above Truths, William Broad (author of the New York Times article in question) seems to have an infinite capacity to boldly and shamelessly twist the facts.  He claims that the graph above is:

A 2000 graph by physicist Bill P. Curry purported to show that tissue damage increases with the rising frequency of radio waves. But it failed to account for the shielding effect of human skin. [emphasis added]

In Truth, according to physicist Bill P. Curry, the graph was provided by Dr. Camelia Gabriel of London University, whose work was summarized by the U.S. Air Force in Air Force report AL/OE-TR-1996-0037, a copy of which Mr. Curry obtained.  The graph absolutely speaks for itself, yet William Broad states that it is an “inaccurate chart” that has led to “unwarranted” fears of wireless technology.

Broad also mentions a mysterious “shielding effect of human skin“, however, human skin is known to ABSORB (not shield against) both microwave and millimeter wave radiation.

According to the Institute of Electrical and Electronics Engineers:

In the interaction of microwave radiation and human beings, the skin is traditionally considered as just an absorbing sponge…

According to Cornell University:

Frequencies greater than 10,000 MHz (10 GHz) are absorbed mostly in the outer skin. Frequencies between 10,000 MHz and 2500 MHz penetrate more deeply (3 mm to 2 cm) and at wavelengths of 2500 MHz to 1300 MHz, penetration and absorption are sufficient enough to cause damage to internal organs by tissue heating.

Keep in mind that 2500 MHz is the approximate equivalent of 2.4 GHz.  This frequency rides right on the border between being “absorbed mostly in the outer skin” and “penetrating more deeply” where it will cause “damage to internal organs through tissue heating.”

Being a representative of a trade union, she had witnessed many times how women and men had been put in front of personal computers (which were very new at that time — the big, thick, cathode ray type computers) and they had got skin irritation, skin rashes, palpitations, prickling pain, redness, heat sensations, etc., which I later named “screen dermatitis.”  When we looked at the skin biopsies, it turned out that they had alterations that mimicked — to 100% I would say — what you would get from other radiation damages like from x-rays and radioactivity….

With respect to 5G millimeter wave frequencies, which are considerably higher in intensity than microwaves, according to a very important Russian study:

The energy of millimeter waves… is absorbed primarily and mainly by the skin.  Our investigations have shown that in the skin of irradiated animals…appeared bunches of nerve fibers with hypertrophy and sections with demyelinization.  In the dermis, among the collagen fibers, were small trunks of various thickness, the neural conductors of which were fragmented…

In research commissioned by the U.S. Army ‘to find out why people ran away when the [millimeter wave] beam touched them,’ they discovered that targets ‘feel like [their] body is on fire.  (see here)

Dr. Ben-Ishai… discovered… that human skin acts as a type of receptor for 5G radiation, drawing it in like an antenna.  (see here and here)

Despite the information above, and the plethora of evidence that documents severe biological damage from exposure to this energy, William Broad goes on to state that:

To no small degree, the blossoming anxiety over the professed health risks of 5G technology can be traced to a single scientist and a single chart.

In Truth, there are literally tens of thousands of studies that have documented harm (see here, here, here, here, and here).  Most of these studies are NOT funded by industry, and therefore, according to William Broad, they should not be considered as part of “established science.”

Of course, in view of the fact that the New York Slimes is in direct financial partnership with Verizon, we should not be surprised by the fact that this unethical and extremely deceptive “newspaper of record” hires only “investigative journalists” like William Broad, who will tow the industry line.

William Broad repeatedly uses Dr. Marvin C. Ziskin as an authoritative source on millimeter waves.  Yet this is the same arrogant man who, for decades, has earnestly touted his own self-importance while repeatedly claiming that ultrasound is safe – even when used in the millimeter range!

Ultrasound is definitely not safe, as has been clearly documented in my recently released book,The Dark Side of Prenatal Ultrasound and the Dangers of Non-Ionizing Radiation – Part 1.  Marvin C. Ziskin is therefore nothing but a well-credentialed liar and it seems these deceivers all band together to promote their filth and distortions in the mainstream media.  Hence, it is wise never to trust those who are part of the mainstream media or who are repeatedly cited as authoritative sources within mainstream media.

Here are some interesting facts about Mr. William Broad, as told by Karl Muller:

“A responsible headline on the subject [of 5G]? From the New York Times? Do not hold your breath…

The New York Times could change the entire history of the world in a day, with exactly one honest article about the known dangers of wireless technology and microwave irradiation.  But understand one thing…  The generals will happily kill every single last one of you, before they relinquish their greatest toy ever, stealth weaponry… that can be used to target entire populations.

There is a global panic to roll out 5G as fast as possible;  the real race against time is to get this system in place before the catastrophic effects of the microwaving of the entire planet become evidence, and those piles of dead bodies around the masts can no longer be buried in the statistics.

In order to stay sweet with his Pentagon informants, someone like William J Broad knows that he has to keep the truth about cellphones and wifi and masts and 5G suppressed. There are no two ways about it. He knows exactly what he is doing. Anyone who quotes Dr Robert L Park of the University of Maryland as his sole expert, is revealing that he is completely in the pocket of the microwave mafia and its agenda.

When you spend decades covering up the truth about the hazards of wireless technology, during which decades this technology is spread all over the world, creating without doubt the single greatest technological take-up in the whole of human history, without any proper health testing, without a proper word of precaution to the world, and especially to the Third World: then you have a serious case of complicity in crimes against humanity. At the very least, this global corporate undertaking represents a vast experiment on human beings that is being conducted without any notion of consent, let alone informed consent. This is a textbook crime against humanity being carried out in full public view, with dead silence from the media. I have come across many journalists whom I felt were directly complicit in covering up the truth about cellphones and health. But I have to say Mr William J Broad has emerged in a class all of his own, and I am therefore making him the first journalist I am naming as directly complicit in the ongoing corporate genocide that is being engineered by the wireless industry. “

William Broad has once again spewed forth nothing other than a full twisting and distortion of the facts.  I believe Broad’s lies and his attempts to deliberately deceive and cause harm to the American people (and to America itself) qualifies as TREASON, for which he (and the rest of his buddies over at the New York Times) can expect to pay a very high price.  May they reap what they have sown.